The Nova Scotia shooting encapsulates all that's wrong with the RCMP

Paul Palango: What happened in Nova Scotia was an example of a cascading failure for the Mounties and there are horrible questions for which answers are needed now 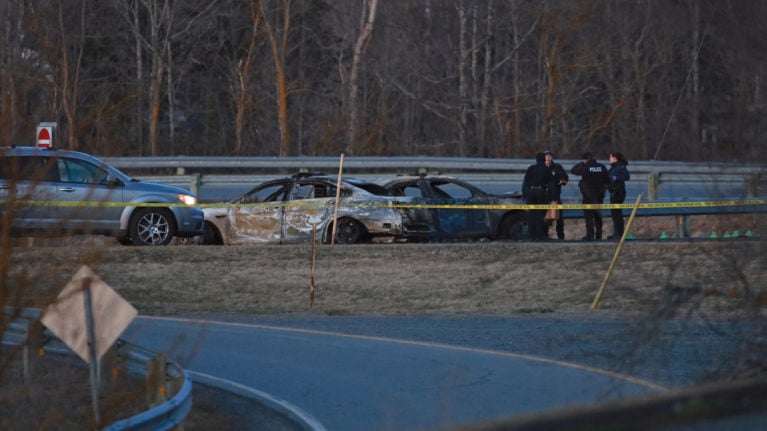 When I awoke that Sunday, my wife, Sharon, was already having a coffee. She told me that she had just seen a Facebook posting that a gunman was on the loose near Truro, N.S.

“No. It says the guy may be driving a RCMP vehicle.”

I made myself a coffee and then started scouting around for details. There were hardly any. Scraps of information really. There had been no warning put out to the public.  From my experience in dealing with the Royal Canadian Mounted Police over the past 27 years or so, I got that sick feeling that comes from having seen this all before.

“This is bad,” I told her. “Worse than you might think. The RCMP has gone into its shell trying to protect itself and its image. This is probably going to be really bad.”

When the news finally dribbled out, we learned that 22 people were dead, including Mountie Heidi Stevenson. The gunman was also shot dead in a gas station by a Mountie. A messy story resolved. The mourning began for the Mountie … and the others. Tributes went out to the first responders. Flags were ready to be lowered. Funerals, such as they were in this age of COVID-19, were ready to be held.

I talked to a few people and quickly learned some unpublished details. The shooter had tied up his ex-girlfriend or wife to a tree, I was told at the time (though that turned out to be not quite accurate).

There were many dead. When the shooter was taken down at the Irving gas station north of Halifax International Airport, a source told me, the RCMP and Halifax police were in a state of chaos. No one knew who was in charge or what they were supposed to do. “It was a shit show.” One police officer figured out that someone who looked like the shooter was at a gas pump and was acting “hinky.” The shooter knew he had been identified, reached for a weapon and had been shot by the curious and alert officer. Story over, right?

In situations like these, I have often been called upon to provide comment—Spiritwood, Mayerthorpe, the Dziekanski death and so on. When three Mounties were murdered in June 2014, I was called by Global TV to comment. I told them I was travelling at the time and couldn’t make it. Actually, I was on my way to Prince Edward Island and was less than 40 minutes away. I had learned from experience that there was no value in trying to point out the shortcomings of the RCMP soon after an event.

“This is not the time for recriminations or criticism,” I had heard more than once.

This time, CBC Radio in Halifax called. I got a little emotional about what had happened. I was extremely critical about the force and asked out loud why Stevenson a 48-year-old mother of two was alone in a car in the situation that got her killed.  It had been at least 13 hours since the events had begun in Portapique, spread the next morning to Wentworth and elsewhere.

“Where was the cavalry?” I asked. “Getting gas at Enfield?”

How did it all go so wrong?

Of course, the recriminations began to fly. The mayor of Lunenburg, N.S., contacted me and gave me a dressing down. This was not the time for recriminations, she told me.

But my experience, if it has taught me anything, is the RCMP is adept at pulling at heartstrings during and immediately after an event, like they have over the past two weeks. We are told that there will be a time and place to discuss these issues, but that time never really comes. By then, it’s all old news and time to move on, they will say.

Even now, without all the details in, it has become clear to me that the Nova Scotia massacre encapsulated all that has been and continues to be wrong with the current structure, ethos and performance of the RCMP.

When the RCMP held its first news conference to announce what happened, the two people in charge of the Nova Scotia RCMP, Assistant Commissioner Lee Bergermen and Chief Superintendent Chris Leather looked understandably stressed on one level and like deer caught in the headlights on another. The information coming forth from them was thin and largely unhelpful.

In my CBC interview, I was asked about how long it would take the RCMP to respond to the scene in Portapique on a Saturday night. I said that it took them, based upon what I knew, 30 to 35 minutes.

In its first timeline, the RCMP said it took 12 minutes. The next day it changed the timeline and fudged the response time even more. Finally, it came out with another timeline which said it took 26 minutes. What is the real story?

The fatal conceit of the Mounties is that every Mountie can do any job, policing is policing. There is no magic.

Here’s how that worked out in the Nova Scotia massacre. Nova Scotia, like other provinces that hire the Mounties to do their provincial or municipal policing, have no say who the RCMP puts in charge or hires in the province.

Bergerman, the officer in charge, spent almost her entire career in federal policing in British Columbia and Ontario. She didn’t do much on the ground in-your-face policing.

However, working on organized crime and counter terrorism is akin to the difference between cricket and baseball. Both have bats and balls, but they are fundamentally different games.

Leather, who started out as a street cop in a regional force outside Toronto, joined the Mounties and became what is known in the force as a “carpet cop.” He moved his way up through federal policing and the corridors of power in Ottawa to be appointed last November as head of operations in Nova Scotia. He was in charge of the police on the ground.

At the second RCMP news conference, the force trotted out the number three in the province, Superintendent Darren Campbell, who was in charge of support services. He’s the guy who makes sure everyone has what they need, especially in an emergency like this one. Where did he come from? As a Staff-Sergeant, he was at RCMP Corps, protecting the legacy and traditions of the RCMP, before he was promoted to Inspector as an assistant in Ottawa to an assistant commissioner. Another former carpet cop.

Instead of tackling the issue head on, they planned and planned, so that no one could be accused of breaching “best practice” protocols.

“This incident was dynamic and fluid,” said Leather in a statement on April 22. “The RCMP have highly trained and capable Critical Incident Command staff who were on site in Portapique. Operational Communications Centre operators assisting the response and police presence was significant. The members who responded used their training and made tough decisions while encountering the unimaginable.”

But as they planned, they failed to put out proper alerts, failed to draw on other forces for help, like Truro and Amherst, failed to set up a secondary perimeter and failed to shut down the very few roads in Central Nova Scotia where the killer was wandering on his deadly mission.

For the RCMP this was an example of a cascading failure that began on Portapiqaue Beach Road—there are suggestions that the Mounties may have been slow to respond there—to the ultimate climax with the accidental meeting between the police and the gunmen at the gas pumps. From the outset the Mounties appear to have become fixated on their own manpower problems and poor decisions at the original crime scene. They then evolved into magical thinking—the gunmen probably killed himself because that’s what a lot of these guys do.

Finally, there is the sad case of Constable Stevenson. She joined the Mounties and was sent to the Musical Ride, even though she hadn’t ever ridden a horse. She spent 13 years there. When she came back to Nova Scotia, she was a press liaison. She was a community support officer, like those who go into schools. She was a traffic cop in Enfield and she was a 48-year-old mother of two.

Yes, she died a hero, but did she have to die?  How did she die? Was she sent to her death by incompetent overseers? The Mountie union says she crashed her car into the killer’s fake police car or was it the other way around? Look at the photos. The only car equipped to survive such a crash was the one driven by the bad guy. His vehicle was fitted with a push bar or ram package, as it’s called. The RCMP has resisted for years improving the safety of his vehicles after it became an issue in Spiritwood, Sask., in 2006. Back then two Mounties rammed a vehicle not equipped with a push bar. Their airbags went off and like sitting ducks they were each shot in the head by the person they were trying to apprehend. Did that happen to Stevenson, too?

Why was she alone there, 13 hours after the rampage had begun? Why were the heavily armed specialists still gassing up almost half an hour after she and another Mountie had been shot in Shubenacadie 20 minutes away? And the Mounties only got their man after one alert officer’s instincts—his Spidey sense—told him something wasn’t right about the guy sitting in a Mazda at a gas pump.

There are a thousand horrible questions for which answers are needed.

But Nova Scotians and Canadians must get over suspending their disbelief and their fond memories of the Musical Ride to do the hard work of addressing this very important issue.

The time has come for recriminations.