The Ontario PCs got their majority. Have they also been cursed?

Jen Gerson: If Doug Ford performs well Ontario will thrive. But rule by Ford is a high-risk, high-reward strategy that could haunt the PC party. 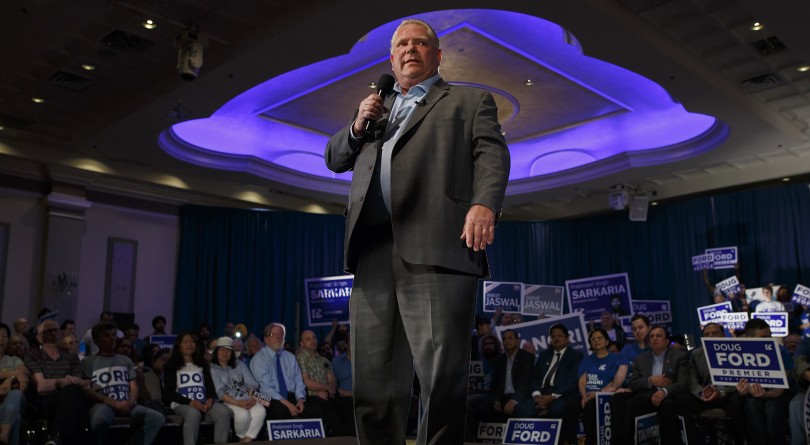 Doug Ford speaks during a campaign rally in Mississauga, Ont., on Wednesday, May 16, 2018. (Cole Burston/Bloomberg/Getty Images)

In moments like this, it is important, I think, to recount the tale of the Monkey’s Paw. Forgive me if you know it already. A short horror story first published in 1902, the tale is about an old couple and their son who come into possession of a mummified Monkey’s Paw, a shrivelled thing that had been cursed to grant three wishes.

“It had a spell put on it by an old Fakir,” explains the paw’s owner, before attempting to throw it into the hearth. “A very holy man. He wanted to show that fate ruled people’s lives, and that those who interfered with it did so to their sorrow. He put a spell on it so that three separate men could each have three wishes from it.”

Although warned, and despite the fact that life was cozy and he wanted for little, the father nonetheless carelessly wishes for £200 to pay off the last of his family’s mortgage.

The next day, his son goes off to work in a factory and dies; his employer gives the family a goodwill gift of £200 for their grief. The next two wishes get worse.

I’ve come back to that story a lot in the past few years. I believe we are now in a timeline that is silently ruled by the grace of the Monkey’s Paw. Everyone is now doomed to get exactly what they think they want.

No one exemplifies this, for me, more than Donald Trump, who wanted all the power and prestige of the American presidency, but none of the duty or honour attached to the office.

Every profile of Trump since his election paints a picture of a man exasperated and bored by the chore of public service, even as he seems to revel in the platform and attention that the presidency has granted him.

On Thursday, another long-standing wish seems to have been granted. Ontario’s conservatives finally wrested power from the much-despised Liberals and the elite forces they had come to represent.

Whether Doug Ford is what conservatives actually need remains an open question. The province of Ontario is in dire financial straits, and Ford’s PC party has absolutely no credible plan to dig itself out from under the pile of debt it will inherit.

Ford has promised a bevy of tax cuts and no job losses, all financed on invisible “efficiencies.” There is no difference between making these types of promises and putting forward a platform guaranteeing free childcare financed on deficit spending and hope.

Ford is just offering a different basket of goodies.

Ontario has long seemed, from afar, to have bound itself to a progressive identity in the same way that Alberta’s sense of self is politically Conservative. As a result, PC leaders have long been loath to actually defend any conservative ideals: debt and deficits are best avoided, governments should price effectiveness and efficiency; taxes should be as low as required to deliver the services the people require and demand. We should be able to have a rational conversation about what those services are, and should be.

READ: The triumph of Doug Ford

Sometimes those principles require unpopular choices; yes, there will be cuts of staff and funding. A leader with integrity should be willing to say so.

This is what you are left with when you hollow politics of any kind of organizing ideology or principle. A populist husk. An electable straw man in a blue t-shirt shilling a buck-a-beer can.

Needless to say, Ford’s win will prove a boon to other Conservative politicians around the country in the short term. Although notably absent during Ford’s campaign, Jason Kenney will surely enjoy a boost ahead of his own fight against the NDP in Alberta next year.

At the very least, Kenney’s early Twitter response indicates that he is happy to welcome another ally in the legal fight to challenge the federal government’s right to impose a carbon tax.

“Tonight, Saskatchewan has a new ally in our fight against the Trudeau carbon tax. The very first promise in the @OntarioPCParty Election Platform is ‘Scrap the carbon tax.'”

It is probably not premature, now, to wonder at the possibility of a Conservative Spring in this country—although, by God, what a sun to bloom under.

Ford is almost certain to bring a degree of chaos, vitriol and polarization to politics in Canada’s most populous province. Already, he is facing court proceedings in the matter of his late brother’s estate: Rob Ford’s widow is claiming that Doug Ford cheated her and her children out of their inheritance while running the family company into the ground. (Those claims have not been tested in court and Ford vows to fight them.)

READ MORE: There are two Doug Fords. Which one will govern?

We could add the questionable membership drives he allegedly oversaw in the service of his preferred PC candidate in Etobicoke; his history of drug dealing and mendacity.

Doug Ford isn’t Donald Trump. Canada isn’t America. But the PC party is going to have to tether this man and his problems to a concrete set of objective goals, lest their leader’s personal problems and foibles undo any real attempts at reform.

If Ford can’t behave well and perform credibly as premier, then the entire province risks being subsumed by the kind of polarized shenanigans that took place under his late brother’s tenure as mayor in Toronto.

Sure, the PCs won their majority. But rule by Ford is a high-risk, high-reward strategy. If Ford fails, he will fail spectacularly, and cement the kind of generational enmity with the electorate that kept the NDP from gaining a foothold on power in Ontario after Bob Rae.

If, on the other hand, Ford performs well in government, then Ontario will thrive and the rest of Canada stands to benefit by extension. For this reason, I think, we have some duty to hope.

Now, the Progressive Conservatives will celebrate, as they should. They got exactly what they thought they wanted.