The politics behind Ontario's sex-ed curriculum

Lauren Bialystok: The sex-ed saga may be over for now, but the era of Doug Ford's populist policy-making has just begun 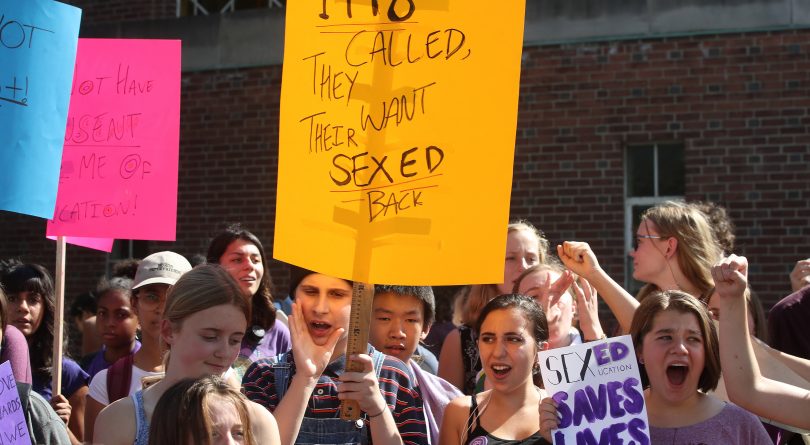 TORONTO, ON- SEPTEMBER 21 - Student across Ontario walkouted to protest the Premier Doug Ford and the province rolling back the Sex Ed curriculum. Students at Bloor Collegiate Institute rally on their lawn. in Toronto. September 21, 2018. (Steve Russell/Toronto Star via Getty Images)

Lauren Bialystok is an associate professor in Educational Ethics at the University of Toronto.

Ontario has been embroiled in controversy over sex education since 2015 when updates to the province’s health and physical education curriculum drew vocal opposition from a minority of parents.

As is typical for such policies, the loudest critics are those who feel that religious or traditional values are threatened by mandatory learning about sexual decision-making and LGBTQ identities. While educators and sexual health experts in Canada and at UNESCO are united on the evidence in favour of comprehensive school-based sexuality education, it has been a struggle to bring educational policies into line with their recommendations, even with strong public support.

The 2015 curriculum introduced by Liberal Kathleen Wynne, the former Ontario premier, was a major step forward, with substantial updates to the material on sexual development and diversity, and new sections on sexting, bullying and consent.

But Conservative Premier Doug Ford, deferring to the traditionalist wing of his party, repealed the elementary curriculum as soon as he took office in 2018 and reinstated the version from 1998.

Now that Ford has unveiled a new Grade 1-8 curriculum that is strikingly similar to the maligned 2015 version, many Ontario residents are understandably confused about the politics of sex education.

I began studying the controversy over sexuality education in Ontario in 2015 and found that the terms of the debate shifted as soon as Ford ascended to power. Rather than articulating concrete objections to the curriculum or citing religious values, the Ford government claimed that there had been no consultation on the 2015 curriculum.

In fact, thousands of parents and 70 health organizations had been consulted, and a study conducted in 2014 found that 87 per cent of Ontario parents considered the topics in the curriculum to be “important” or “very important” to teach in schools. The curriculum had democratic support and was developed through appropriate processes.

Ford also claimed that he needed to repeal the curriculum to consult teachers.

MORE: How to save Doug Ford’s government

However, a survey we conducted after the release of the 2015 curriculum found overwhelming support among teachers for the more thorough, inclusive and up-to-date curriculum. In case it wasn’t clear what they thought, the Elementary Teachers’ Federation of Ontario protested the retraction of the curriculum and, along with the Canadian Civil Liberties Association, brought a Charter challenge against the government.

In other words, notwithstanding the predictable objections of a small constituency, there was no compelling reason to repeal the 2015 curriculum.

To make the move seem justified, Ford undertook public consultations in the fall of 2018 with great fanfare. Months of suspense and $1 million later, the results showed what we already knew: the majority of Ontarians support all the topics that had appeared in the 2015 curriculum, in more or less the same grades.

The repeal of the 2015 curriculum was also accompanied by the creation of a “snitch line” to report on teachers who didn’t adhere to the outdated materials. As the Elementary Teachers Federation of Ontario argued in court, this unprecedented threat of surveillance and disciplinary action had a chilling effect in the classroom, which is consistent with research on teachers’ apprehensions about teaching sexual health. Jacqueline Cohen, Sandra Byers and Heather Sears of the University of New Brunswick found that anticipated negative reactions from parents and a perceived lack of institutional support affected Canadian teachers’ willingness to cover sexual health education.

Teachers in Ontario last year were particularly likely to self-censor on topics related to sexual diversity and gender identity, which were not addressed in the 1998 curriculum.

Indeed, despite the significant continuity between Wynne’s 2015 curriculum and Ford’s 2019 reboot, “gender identity” is a major casualty of the transition. Previously introduced in Grade 3, the critical topic will now be postponed until the end of Grade 8, well after most students have started puberty and begun thinking about gender.

In the court challenge heard earlier this year, we learned that teachers were free and, indeed, required to address sexual diversity in an inclusive fashion, irrespective of the menacing rhetoric from the government. This meant that the challenges to the repeal were ultimately dropped, but only because legal protections for sex and gender minorities made Ford’s threats toothless.

The 2019 curriculum, which is consistent with Canadian law but out of step with research on gender development, can be seen as Ford’s attempt to have it both ways. The new curriculum also requires all school boards to develop a policy for parents to easily opt their children out of sex education classes—an olive branch to those who consider their values to be at odds with evolving liberal norms.

This debacle is not only about longstanding culture wars, but, more tellingly, about the place of expertise and professionalism in our democracy. Ford rose to power using populist rhetoric that echoes U.S. President Donald Trump’s anti-establishment tropes. Claiming to be “for the people” and, specifically, on the issue of educational policy “for the parents,” Ford has framed democratic policy-making as an adversarial struggle between “the people” and “the elite.”

Ontario teachers have been positioned by the Ford government both as a stakeholder group whom Wynne had failed to consult, and as a subversive class who need to be monitored by “the people.” Ford has no teaching experience or medical expertise (neither do his past or present education ministers) but he flagrantly rejected the advice of both educational and health experts. This kind of anti-elitism has been linked to the rise of right-wing populism across North America and Europe.

The larger political context may help explain why Ford, with no record of social conservatism, manoeuvred “sex ed” into a signature issue that he expected to bear political fruit. He courts voters across the spectrum while pursuing a hard-right agenda. In fact, while presenting himself as a champion of effective education and defender of the public interest, Ford has announced harrowing cuts to education that will balloon class sizes and lay off thousands of teachers.

The premier now seeks credit for “modernizing” health education, despite the havoc he created by resuscitating a 20-year-old curriculum.

The new curriculum is progressive in many ways, and contains several important new topics, such as cannabis, vaping and concussions. But these updates could have been pursued without repealing the entire 2015 curriculum for a year and promoting antagonism toward teachers, experts and sexual minorities.

The sex-ed saga may be over for now, but the era of populist policy-making may have just begun.