The Prime Minister finally addressed independent workers, and it's one step in the right direction

Andrew Cash: Until now, it's been acceptable for employers and governments to shrug off any responsibility for freelancers, contract, gig workers 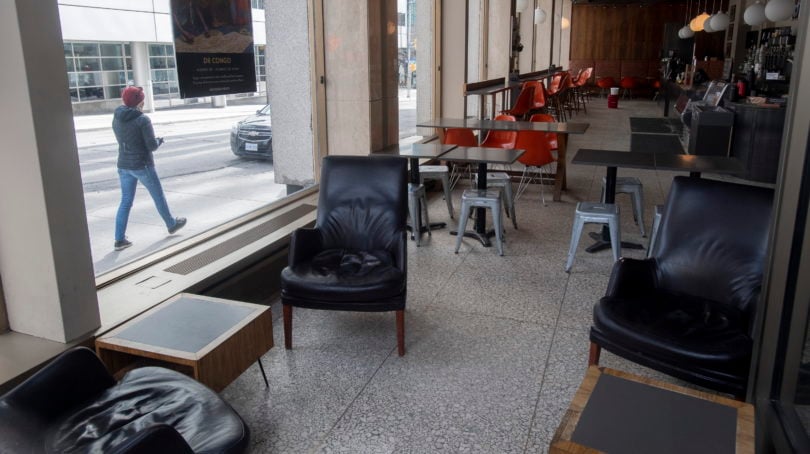 A woman walks past a coffee shop which closed because of the COVID-19 virus, Wednesday March 18, 2020 in Ottawa. (Adrian Wyld/CP)

Andrew Cash is the co-founder of the Urban Worker Project and a former Member of Parliament for Davenport.

On Wednesday, when Prime Minister Justin Trudeau unveiled his $82 billion stimulus package, he mentioned supporting freelance and self-employed workers. Wait what? I’ve never heard a Prime Minister mention supporting independent workers before, much less a Minister of Finance. During this unprecedented time that may seem like no big deal. But if you’re a Toronto musician, performer, writer or artist, you were likely standing at the brink of financial free fall since every way you make your living has been shut down. On Wednesday, you took a small step back from the edge.

Many arts and culture workers received a harsh blow earlier this week. First, all their tours and in town shows were cancelled. Then all bars, restaurants, theatres and nightclubs closed. Not only have their professional gigs been cancelled but the service industry gigs they lean on to help supplement their arts incomes have been put on pause as well. Those bar, restaurant and club owners hang by the skin of their teeth and likely don’t have reserves to keep anyone employed throughout a short–term shutdown.

I know that all workers across the country are worried right now about how they are going to pay their bills and make ends meet. Freelance, contract, self-employed, temp and gig economy workers have an added layer of angst because they are usually ignored or otherwise shut out from most government programs that protect and support workers with employee status. That may have just changed.

Trudeau announced two new emergency benefits that are designed to address—in the short-term—the gaping hole in Canada’s income support system for independent workers. The Emergency Care Benefit and the Emergency Support Benefit will be available to independent workers who cannot access Employment Insurance (EI), who have lost their gigs, are sick themselves (or looking after someone who is), and who are looking after kids who aren’t in school.

This is a good first step. Freelance workers could be eligible for income support of up to $900 every two weeks. It remains to be seen just how much friction and frustration they’ll have to go through to access the benefit though. If, like our current EI system, the emergency measures are overly bureaucratic, slow and don’t deliver a benefit that truly makes a difference, it will not succeed. That cannot be an option right now.

How independent workers are supported is crucial in stopping the spread of COVID-19. But this is important beyond the lifespan of this virus. Yesterday’s announcement could mark a historic, fundamental shift towards better rights, benefits and protections for self-employed workers in the long term.

Coronavirus has forced us to all agree that it’s dangerous to get into an Uber if we are unsure whether the driver is sick. This is no longer just a private, personal worry but one of major public concern. We need everyone to stay home. But we still haven’t agreed on whether it is acceptable that an Uber driver has to decide between working while sick or forfeiting a paycheque. Even the question of whether the company bears any responsibility at all for its workers is ferociously up for grabs. Campaigns like the one to unionize Foodora drivers in Toronto have hinged on this very question, with companies contending that those that use their apps are not their employees and therefore not their responsibility. Recent bills tightening rules around the misclassification of freelancers in California have been met with intense push back from employers, and even some freelancers.

The success of many businesses today is predicated on the availability of a large, unstable, unprotected, precarious workforce. Any curve ball (and this pandemic is a major one), can push those workers over the edge. “Spring was totally booked now I have absolutely no income,” Toronto musician Dani Nash told me. “I tried to apply for EI (under the existing system) but I didn’t have the forms they were asking for.” She is hoping to have better luck when the emergency benefits are made available in a couple weeks.

Ensuring that all workers have decent work and labour protections such as EI isn’t just an issue of economic and social justice for all. It is a public health issue now, too.

The depth and breadth of Wednesday’s emergency measures were designed to help pull us through the worst of this virus. But they also stand in marked contrast and proportion to the systemic weaknesses of our social safety net and the cruel disparities intentionally baked into the global economy that have left just about every worker—middle-class, working-class, low-income and precarious—desperately exposed right now. Governments, including this one, have long resisted calls for measures that would strengthen supports for workers, including universal childcare, more affordable housing, an expanded healthcare system, EI reform, a guaranteed living wage and labour rights for independent workers.

Until now it has been acceptable for employers and governments to shrug off any responsibility for freelancers, contract, gig and low-income precarious workers. It’ll never be acceptable again.