The problem with Joe Oliver's soothing words on climate change

Stephen Maher: The former finance minister says Canada should focus on the good news about the climate crisis. His argument is thin and his position is conflicted. 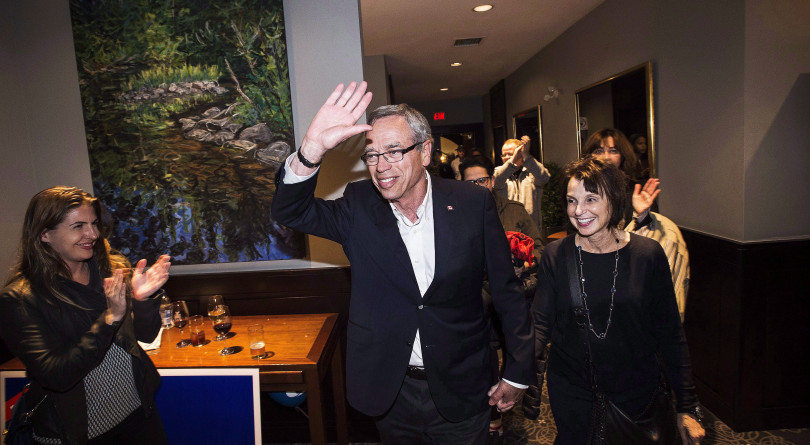 Oliver arrives at his election party in the Toronto riding of Eglinton-Lawrence on election day, Oct. 19, 2015 (Aaron Vincent Elkaim/CP)

Joe Oliver, who served as natural resources and finance minister in Stephen Harper’s government, appeared on Global TV’s West Block show on Sunday to tell viewers that they have the wrong idea about climate change.

As Hurricane Dorian descended on the Bahamas, Oliver advised Canadians to focus on the good news about a changing climate: a longer growing season for Canadian farmers!

Oliver was citing a recent report from Moodys Analytics that sorted countries into likely winners and losers based on economic models. Moodys concluded that, with a longer growing season, Canada’s farmers would benefit, even as the Indian economy dramatically shrinks.

When it comes to climate science, Oliver is a cherry picker, someone who seizes on a fact, takes it out of context and builds an argument around it. You can tell that’s what he’s doing because, as the facts change, his conclusion is always the same: nothing must be allowed to get in the way of the Canadian fossil fuel industry.

On Sunday, as host Mercedes Stephenson politely quizzed him about the upside of a warming global climate, he quickly pivoted to his key message: there is no point cutting Canadian emissions. “The point is, it isn’t the dire catastrophe that you keep hearing about,” he said. “Canada would in fact be a beneficiary but we only represent 1.6 per cent of global emissions, and even if we devastate our economy we wouldn’t have a measurable impact on where the global temperature would be  … We can’t make a difference.”

Oliver is echoing a view from the most strident Canadian oil executives, who argue that because Canadians produce a small share of global emissions, we would be foolish to do much to cut them. (They never mention, by the way, that we have among the world’s highest emissions per capita.)

This is a fallback position. They previously argued, and Oliver seemed to agree, that the cause of  climate change was unproven, just as cigarette manufacturers long argued that there was no conclusive evidence that smoking caused cancer.

As the tobacco industry gave up on the pro-smoking argument and started instead warning the public about the dangers of tobacco taxes, the fossil industry is now abandoning the scientific debate and making arguments about what we should do about the situation: not much.

“I don’t think we should be terrifying our children and devastating our economy based on extreme projections, which have been made I guess for the last 25 years,” Oliver told Stephenson. “I mean, 40 years ago was global cooling and that was going to destroy us. Now it’s global warming.”

Oliver’s familiar, avuncular presence is soothing, but his arguments could hardly be weaker.

For one thing, he is seizing on a single report, which relies on the kind of computer modelling that he pooh poohs when he disagrees with the conclusions. And the Moodys report doesn’t factor in the impact of increased fires, flooding, coastal erosion and other climatic horrors. Consider that the Fort McMurray fire alone cost an estimated $10 billion. This year’s fires have so far burnt almost 900,000 hectares in Alberta—one and a half PEIs.

Scientists believe climate change is making those fires worse, but they would find it hard, no doubt, to convince Oliver of that.

And, anyway, how hard-hearted do you have to be to look at the biggest ecological and humanitarian disaster in history and think of the economic upside? Only the most flinty-eyed analyst can relish the opportunities created for Canadian farm producers if heat and water shortages make much of India uninhabitable, creating new opportunities for pulse exporters once our Indian competitors have been forced out of business.

Oliver’s arguments are so thin, his conclusions so predictable that he risks losing the respect traditionally accorded to statesmen opining on matters of public importance. To be sure, there are arguments to be made for proceeding cautiously on emission reductions, particularly so long as Donald Trump is president. And we do have to be conscious of the risk of carbon leakage. If we increase the price of pollution too quickly, we might force out companies who will set up shop in less civilized areas, like Michigan, and pollute as much as ever, which would mean we are damaging our economy without reducing emissions.

But there are lots of smart people debating these issues who don’t have a conflict of interest, as Oliver does. In 2016, a year after he lost his Toronto seat, Oliver joined the board of High Arctic Energy Services, a Canadian oil drilling company. The company is headed by Michael Binnion, a Calgary petroleum executive who plays a key behind-the-scenes role funding conservative third-party groups and advocating forcefully against climate policies that threaten the interests of his industry.

Toronto Stock Exchange records show that Oliver has received stock options worth hundreds of thousands of dollars for his work for Binnion’s company. I don’t question Oliver’s sincerity, but I am more interested in hearing from commentators whose financial interests are not tied so closely to the industry that has created this terrifying crisis.