The real betrayal of Albertans? Lifer politicians who won't tell them the truth.

Scott Gilmore: Every major player and investor understands the days of oil are numbered. Politicians are the only ones too shameless to say it out loud. 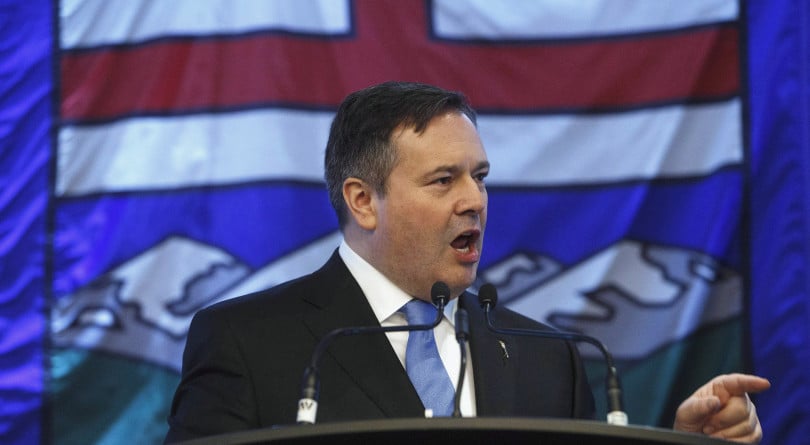 Kenney speaks to supporters after being sworn in as MLA for Calgary-Lougheed, in Edmonton on Jan. 29, 2018 (CP/Jason Franson)

I dislike career politicians as a species. Until this week I couldn’t explain to myself precisely why. All I knew was that if someone has spent most if not all of their adult life in politics, there is an almost certain chance they make the hair on the back of my neck stand up.

I disentangled this personal puzzle as the Teck Resources issue percolated in the news over the last week. To refresh everyone’s memory, the Vancouver based resource company had been waiting for approval from the Trudeau government to go ahead with its Frontier oil sands mine near Fort McMurray. Alberta premier Jason Kenney and the outgoing federal Conservative Party leader Andrew Scheer had made the mine application a casus belli. They warned if Ottawa did not support the project, it would be a cataclysmic betrayal of Albertans, unleashing a future of economic misery for the province.

Its carefully worded letter explained that Canada’s regulatory environment is too uncertain for it to continue with its mine.

I grew up in Alberta and worked in a refinery to pay for university. Most of my friends and family back home either work in the oil patch or have jobs and businesses that directly depend on its health. So, I am especially sympathetic to the pain, worry and anger as their economy continues to sputter.

Who I am not sympathetic towards are cynical politicians like Kenney who continue to lie to Albertans in order to intentionally exacerbate this pain, worry and anger.

Kenney, Scheer, Teck, every major energy company that is not already in the oil sands, Bay Street, Wall Street, and the banking and insurance industries, all know that the days of oil are all but over. But the politicians are the only ones too frightened or too shameless to say it out loud.

There is no doubt that a concern about Canada’s regulatory process was the straw that broke the Teck camel’s back. But, in order for that to be the metaphorical last straw, the camel has to be already straining under several bales of hay.

The three heaviest bales in that load are the facts that the global price of oil is well below the point that would make the Frontier mine profitable, no one anywhere is predicting those prices will increase, and investors are fleeing the oil industry because the emerging global consensus is that if we don’t address climate change now the very existence of the human race is at stake.

That is not a claim being made by Greta Thunberg, or a wild-eyed Extinction Rebellion activist. That comes directly from the multinational investment bank JPMorgan. In an internal report on the threat climate change poses to their investments, which was leaked last week, the bank’s economists noted, “We cannot rule out catastrophic outcomes where human life as we know it is threatened.”

Investors are not just avoiding Alberta’s oil sands, they don’t want to put money into oil anywhere, period. Furthermore, these investors, and even Teck itself, all publicly acknowledge that a carbon tax is the most effective way to combat climate change. And Kenney know this. But he not only won’t tell Albertans this difficult truth, he will spend millions of their own tax dollars on disinformation efforts to try and convince them it’s all just a conspiracy against them, that reality itself is betraying Albertans.

Why? Because while Kenney understands (as all the banks, rating agencies and investors understand) that Alberta needs to get out of the oil business if it wants to avoid becoming an economic backwater, and while Kenney may genuinely want a prosperous future for Albertans, what he wants more is to stay in office.

You don’t become a lifer-politician like Kenney or Scheer, without badly wanting to get re-elected again and again. And, when you have been in politics long enough, and when you really want to stay in politics because it’s the only thing you know, then you inevitably start telling people what they want to hear, not the truth they need to hear.

And, in this case, unless these conservative politicians are idiots (which is possible but very unlikely) then they know that climate change is real. They know when JPMorgan says it threatens humanity, it probably does. They know Alberta needs to diversify in order to avoid economic misery. They know that championing the Frontier mine puts them on the wrong side of science, economics, history and common sense. But these people are so cynical they are willing to lie to their voters and pretend none of that is true, just so they can stay in power a little longer.

That is the real cataclysmic betrayal of Albertans. And, that is why I so deeply dislike career politicians as a species.