The real election threat is China

Terry Glavin: Ottawa has been focused on cyber-meddling. But consider the case of John McCallum for a glimpse at a more present danger. 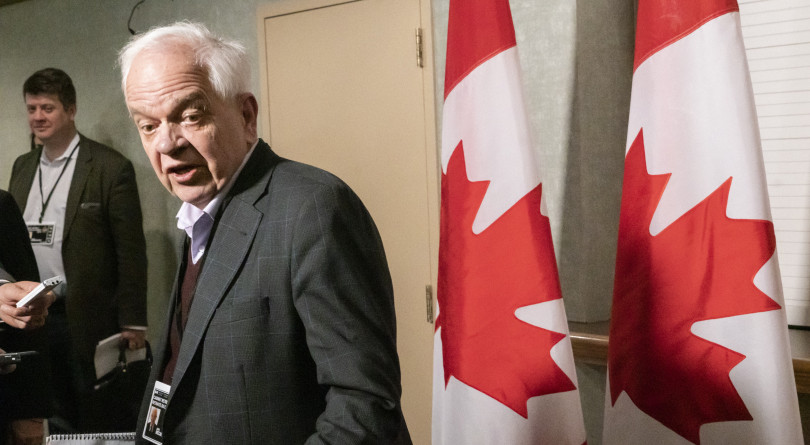 McCallum arrives for a cabinet meeting in Sherbrooke, Que., on Jan. 16, 2019 (Paul Chiasson/CP)

By happily admitting last week that he has been advising senior Chinese foreign ministry officials about how to influence the outcome of the October federal election, John McCallum, Canada’s disgraced former ambassador to China, has once again invited a whole lot of spirited public speculation about what the hell gives with this guy.

The most charitable view is that he’s just clueless, which is an easier hypothesis to defend than you might think. McCallum’s fumbles during his two years as Canada’s ambassador in Beijing reached such an embarrassing crescendo in January that Prime Minister Justin Trudeau had to fire him. It was in the early innings of the total collapse in diplomatic relations between Canada and China, and McCallum’s contribution was to give every impression that he’d broken with Ottawa and gone over to the other side.

The view of Andrew Scheer’s Conservatives is that there is something far more disquieting about McCallum’s candid admissions to the South China Morning Post last Monday. McCalllum said he’s been telling top Chinese officials that if Beijing played its cards right, it might be able to head off a Conservative election victory in October.

The Conservatives have issued a formal request to the Canadian Security Intelligence Service to look into it. “I forcefully and unequivocally condemn recent comments by high-profile Liberals encouraging the Chinese government to help re-elect the government this October,” Scheer says. Foreign Affairs Minister Chrystia Freeland says she’s similarly appalled. “I think that it is highly inappropriate for any Canadian to be offering advice or opinions to any foreign government on how that government ought or ought not to behave to secure any particular election outcome in Canada.”

McCallum said he’d advised top Chinese officials that any further “punishments” Beijing inflicts upon Canada would heighten the likelihood of Canadian voters turning to the Conservatives, who are “much less friendly to China than the Liberals.” He’s right about that. A case can be made that McCallum would have to be clueless to have said that out loud, but it’s not idiotic advice. And John McCallum is not just “any Canadian,” or just any random clueless person. And if CSIS were to properly scrutinize what’s up with McCallum, it’s a thick file.

Ottawa’s recent initiatives against foreign interference in elections have been focused on Russian-style disinformation and cyber-meddling of the type that preceded the 2016 election of Donald Trump. But Canada’s predicament is more like Australia’s, and Australia’s recent Foreign Influence Transparency Scheme would be a better model.

Launched last December in response to Beijing’s accelerated subversion of Australian politics and a series of scandals involving several Beijing-compliant politicians, the Australian law requires individuals or companies politicking on behalf of a foreign power to register and set out their activities on a public website.

It’s been eight years since Richard Fadden, who was then the CSIS director, warned that numerous Canadian politicians had come under Beijing’s spell. For his trouble, Fadden was admonished by the House of Commons Security Committee, which recommended that he be fired.

He should have been thanked for what has lately become obvious as prescience, but in any case, there is no evidence that McCallum, who has been a Liberal Party fixture since the days of Jean Chrétien, has done anything illegal.

During his time in the House of Commons, long before his appointment as ambassador, McCallum took $73,000 in free trips to China, courtesy of the Chinese state and Chinese business interests—all perfectly legal. Following in Chrétien’s well-worn footprints, McCallum is now working as a strategic adviser on China trade with the firm McMillan LLP. Again, perfectly legal.

READ MORE: Whose side is Jean Chrétien on?

As soon as he resigned as an MP in 2004 in the wake of the AdScam corruption scandal, Chrétien carved out a lucrative practice greasing China’s investment wheels in Canada and Canadian corporate interests in China. And like McCallum, the former prime minister has been busy lately with indiscretions of his own on Beijing’s behalf.

Freeland has been forced to publicly rebuke Chrétien for badgering the government to placate Beijing by simply instructing Justice Minister David Lametti to drop the extradition proceedings against Huawei chief financial officer Meng Wanzhou—the impudence that prompted Beijing to punish Canada in the first place. It was Meng’s defence case that McCallum was fired for pleading in January. McCallum also said it would be “great” if Trump intervened with the U.S. Justice Department’s prosecution of Meng by somehow forcing the department’s lawyers to drop the whole thing.

Ever since Meng was picked up in Vancouver on the Justice Department’s extradition warrant—she faces 13 counts of fraud and conspiracy charges related to Huawei’s alleged sanctions evasions in Iran—the “punishments” Beijing has inflicted on Canada have been ominous and cruel. Among them: the Ministry of State Security’s detention of diplomat-on-leave Michael Kovrig and entrepreneur Michael Spavor and a trade embargo on Canadian canola, soybeans, peas and meat products. With threats of further retaliation to come.

While McCallum and Chrétien are just two among several former Liberal cabinet ministers, Liberal insiders and senior diplomats who have gone on to more lucrative engagements as corporate advisers, fixers and influence-wielders in the China trade circuit, there’s nothing illegal about any of this. Over the years, the practice has become normalized.

Appointing McCallum instead of a seasoned diplomat to the embassy post in Beijing back in 2017 was the Trudeau government’s way of boasting about just how much Canada wanted to deepen its ties with China. The credentials McCallum was fond of citing on his own behalf included his enthusiasm for China, his ethnically Chinese wife and the fact his three sons had each married Chinese women.

But McCallum’s enthusiasm has proved rather less than an asset. It turned out to be Canada’s greatest liability the moment Beijing began to bare its fangs over Meng’s arrest last December.

What got McCallum fired in January was not just that he expressed the opinion that owing to offhand remarks by U.S. President Donald Trump, Meng had a good case that the charges against her were political—thus contradicting Trudeau and Freeland, but pleasing Beijing. It was that he was warned to knock it off, and after explaining that he “misspoke,” he stated publicly that it would be “great” if the U.S. could secure Kovring and Spavor as part of a U.S.-China exchange to free Meng—when Freeland and Trudeau were insisting that Meng’s case be left to the courts. Freeland described McCallum’s conduct as “untenable,” and Trudeau fired him.

Ironically, only a few months before McCallum’s appointment, Trudeau’s officials had signed a multi-faceted agreement with Beijing that committed Canada to enter into talks for an extradition treaty. It is precisely the spectre of an extradition agreement with Beijing that has spurred hundreds of thousands of Hongkongers to take to the streets in recent weeks in a series of unprecedented and dramatic protests. No such protests erupted in Canada.

Beijing’s influence operations in Canada are at least as deeply entrenched as they have been in Australia, but there isn’t much in Canadian law to stand in Beijing’s way. The all-powerful United Front Work Department, which Chinese president Xi Jinping calls China’s “magic weapon,” is increasingly hyperactive in Canada. And Andrew Scheer’s Conservatives have painted a big target on their backs by promising a dramatic break with what McCallum calls Canada’s “friendly” China policy going back a quarter of a century.

RELATED: China’s latest scolding for Canada: don’t be so naive

The election of a Conservative government would mean China can forget about a free trade deal with Canada. Scheer has further promised that China’s state-owned enterprises would lose their untrammelled access to Canadian markets. Along with the Kremlin and various state sponsors of terrorism, especially Iran, a Conservative government would count China as one of the “three of the greatest foreign threats to Canadian security and prosperity in the 21st century.”

Scheer says he’d deny any role for Huawei Technologies, Beijing’s “national champion,” in Canada’s fifth-generation (5G) internet connectivity rollout—it now seems certain that Ottawa will postpone its decision on Huawei and 5G until after the October election. Scheer says he’d also pull back the $250 million Trudeau’s Liberals have deposited in Beijing’s Asian Infrastructure Investment Bank. A Conservative government would also launch complaints with the World Trade Organization to address the economic “punishments” that Beijing has already inflicted upon Canada.

In their letter to CSIS director David Vigneault, deputy Conservative leader Lisa Raitt and the Conservatives’ public safety critic Pierre Paul-Hus said: “Canadians expect that the upcoming election will be conducted in a free and fair manner, and that any and all incidents of foreign interference will be fully investigated.”

Canadians may well expect this, but it is specifically covert foreign election interference that is against the law in Canada, as is foreign funding of political parties and foreign funding of third-party activists during the legal campaign period. And Ottawa’s new multi-agency Security and Intelligence Threats to Elections (SITE) Task Force was set up to block “covert, clandestine, or criminal” interference in elections, and not the sort of mischief McCallum has been making.

When foreign influence operations are conducted out in the open, and foreign governments are invited publicly to influence voter preferences in order to achieve a particular election result, what is CSIS supposed to do?