Opinion: Despite the naysayers and the conditions stacked against it, small-town Canada is actually alive, happy, and building a brighter future 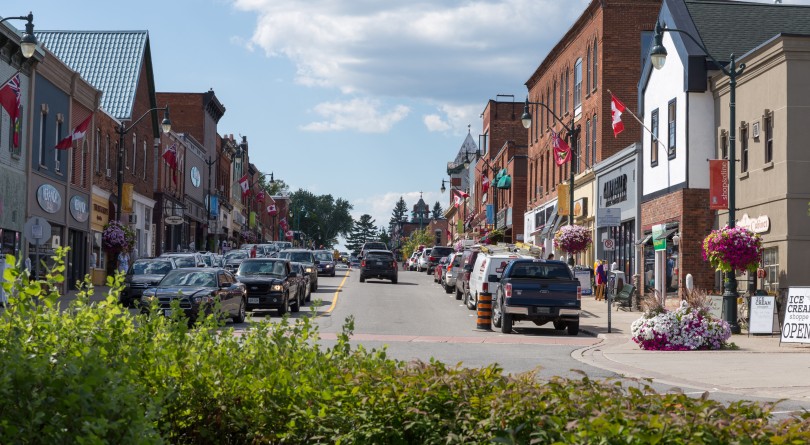 A shot of historic Bracebridge, Ont., on August 2016. (Shutterstock)

Vicki-May Hamm is the president of the Federation of Canadian Municipalities and the mayor of Magog, Que.

Small towns and rural communities are continually adapting to familiar challenges—aging populations, the closure of a major local employer, or limited access to communications infrastructure. Yet so many of these communities have not just endured, but thrived.

As the mayor of a Canadian town with deep rural roots, the opportunities and challenges of small-town life are front-and-centre for me. But perhaps the biggest challenge for Canada’s rural communities is the near-constant battle against the common misconception that small towns are just barely surviving, furthered by pieces like the one from Maclean’s columnist Scott Gilmore, when he wrote that “small town life is dying. This is sad. But it’s not tragic.”

It is simply not true, and it denies the reality of every Canadian who is working hard to improve rural life.

First, Gilmore suggests Canadians are “leaving” small towns. In fact, from 2001 to 2016, Canada’s non-metro population actually grew by 5.5 per cent. In comparison, Canada’s overall growth rate during that period was 16.9 per cent. Simply put, rural Canada is growing, admittedly at a slower pace than the country’s population, but growing nonetheless.

Then, Gilmore claims that “the modern Canadian economy is an urban one, driven by services, manufacturing, construction and ﬁnance. Less than 10 per cent of our GDP now comes from traditionally rural-based sectors such as mining and agriculture.” This would be true if you think the only industries outside of Toronto are mining and farming. However, statistics that capture a broader economic spectrum shatter that assumption.

Rural communities employ over four million Canadians and generate 27 per cent of national GDP. In 2016, almost 23 per cent of Canadians worked in rural communities, with job growth driven by the health care and social services sector (37.4 per cent), construction (62 per cent), and professional, scientific and technical services (47.5 per cent). These growth sectors mirror the broad economic shifts experienced in Canadian communities of all sizes.

Then, Gilmore stereotypes citizens of small towns as “hewers of wood and drawers of water.” In true Canadian fashion, we apologize for failing to fit in that narrow view.

Factual correction asides, the piece makes another point that requires unpacking. In writing about the “fundamental laws of economics,” Gilmore reminds us that “if your community can’t support jobs, your town will decay.” On the surface, this adage resonates. However, its simplicity fails to capture the nuanced and systemic challenges Canada’s small towns face.

Municipalities shoulder 60 per cent of Canada’s public infrastructure, with access to just 10 cents of all tax dollars collected. This fuels a fiscal squeeze that is further exacerbated in rural communities, which have lower ratepayer densities.

Even the basic digital connectivity urban Canadians take for granted is hard to come by in rural Canada. Two million rural, remote and northern Canadian households don’t have reliable access to broadband, creating a large and growing gap in economic potential.

This is an uneven playing field for Canada’s rural communities, which hamper them from succeeding at the metrics by which they are then judged.

Despite these conditions, small-town ingenuity and innovation is happening. Through active land acquisition and labour recruitment, Winkler, Man., has fuelled 12 years of population growth and its evolution into the industrial and commercial epicentre of southern Manitoba. In the wake of a mine closure, Faro, Yukon is taking the reins and driving redevelopment and community planning that will boost the rental housing market during mine remediation efforts. And for true innovation, one only needs to look at the Eastern Ontario Regional Network, an intensive multi-community effort that has brought high-speed broadband to hundreds of thousands of households. These are models of success that are ready to be scaled up across the country.

Still, on issues like closing the broadband gap and beyond, there are many ways to solve this problem through rural leadership—but there is a need for federal leadership and political will, too. FCM’s rural members are determined to ensure their collective voice is heard in Ottawa as the federal election looms, and we have been calling for two key initiatives: the application of what we are calling a “rural lens” across federal programs, and the closure of the rural broadband gap.

Applying a rural lens means ensuring federal investments recognize the fiscal limitations and sparse populations of rural communities. On this front, we are already seeing results. In recent years, FCM has worked in partnership with the federal government to shape major rural-specific infrastructure funding, which has streamlined administration and boosted the federal share of project costs in communities with fewer than 5,000 people. This is how applying a rural lens can transform our small towns.

Similar will is needed when considering the recent Greyhound route closures in rural Canada. These route closures only represent a symptom of the end to those who do not wish to tackle the problem. Yet there are some of us who believe in finding solutions. I hope that includes all levels of government: federal, provincial, territorial and municipal.

In spite of the conditions of the playing field, small-town Canada continues to thrive. And armed with the right tools and a strong federal partner, rural governments are set to build more prosperous communities to ensure those beloved Saskatoon berry pie recipes and curling trophies continue to be passed down for generations to come in the places they call home.