The Republican party has become an authoritarian party

Shannon Gormley: The GOP faced a test and it failed. Now will the destruction of one major party corrupt the one that remains? 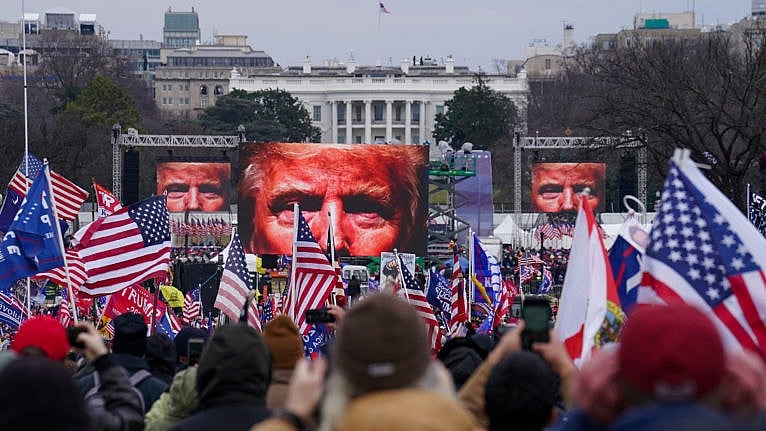 Trump supporters participated in a rally on Jan. 6, 2021, in Washington (John Minchillo/AP/CP)

Having supported a president who demanded his political opponents be imprisoned, who publicly attacked independent judges and attorneys general overseeing cases against his business and political dealings, who privately demanded a loyalty oath from the director of the intelligence agency investigating his campaign dealings, who encouraged violence against protesters and members of the free press at rallies, who openly praised and privately met with the leader of an American adversary after intelligence services discovered it interfered with the election he won, who attempted to blackmail the leader of an American ally by threatening to withhold aid unless it gave him information he could use in the next election he wished to win, who hosted foreign dignitaries at his Mar-a-Lago resort and charged them for rooms, who banned people from the United States if they came from Muslim countries, who locked children in cages if they came from Latin American countries, who knowingly lied to the country about the nature and danger of a deadly pandemic, who called to “LIBERATE” states from his rivals as they were terrorized by militias, who disputed the legitimacy of the voting process before it began, who when asked whether he would accept the peaceful transfer of power ordered a white supremacist group to “stand by,” who refused to concede the election he lost by the same number of electoral college votes he described as “a landslide” when he won them, who called for millions of ballots to be discarded, who demanded a state official tamper with ballots lest he be jailed for non-compliance, and who called for citizens to rush the capital and for the vice-president to refuse to certify the election results—having supported the president through all this—it is clear: the Republican party has become an authoritarian party. It backed an authoritarian; it is authoritarian.

In crucial respects it has nothing left in common with any other major political party in any other established democracy in the world, and in these same respects it is indistinguishable from the ruling parties of Russia, Turkey and Hungary: it does not recognize the legitimacy of its political opposition; it attempts to subvert the justice system to its will; it attacks the free press to discredit or prevent any and all criticism; it scapegoats vulnerable minorities to disguise vulnerabilities of its own; it abuses institutions and betrays the country for personal and political gain; it propagates conspiracy theories with abandon and lies without shame; it goes along with all these things and virtually whatever else the leader wants as long as the leader is strong.

In America’s party of the strongman, however, no strongman remains. The president of the United States is a senile old man shouting at his television. He has been this throughout his political tenure, yes, but now he is merely that; now, his long-favoured television station isn’t shouting all of his derangements back at him. The Republican party faced a test—would it support an authoritarian as long as an authoritarian offered it power?—and now that the authoritarian is enfeebled the test is over, and it failed. It went along for the mad ride until it smashed into a tree. It is no credit to the party if it does not follow the president all the way to a coup, because there is no coup attempt viable enough to effectively follow through on. A major democratic party followed a fascist to his end, and there it met its own.

But we know this. I fear we know less well how, and whether, the destruction of one party may corrupt the party that remains. Political parties define themselves in relation to each other. If President Donald Trump looks as much like the devil as the United States has ever seen, then many Democrats will believe themselves to be on the side of what else but the angels. They will imagine themselves to be what other than angels. It is when we believe ourselves most assuredly to be the good guys that we are most able to justify all the bad we may wish to commit. And if in a two-party democratic system one party exempts itself from democracy by openly disavowing it, what does the remaining party—the ruling party—become?

So it is on the eve of a sick administration’s destruction that we remember that in a healthy competition—in a healthy competitive democracy—it is for our own sake, not for the sake of our opponents, that we seek to defeat, not destroy, them, just as long as our opponents are minimally healthy themselves. The Republican party is so corrupted that it cannot function as the opponent that democracy requires; however, there remain decent people who endorse the principles it used to espouse—small government, fiscal caution, liberty from various constraints—but attach a higher priority to the non-negotiable tenets of democracy. American progressives may prioritize different virtues, but whatever social ills they believe conservatism to be responsible for, their enemy must be not conservatism but authoritarianism. The faster honourable conservatives can rally the better for all it will be, including and especially those who oppose them.

This column appears in print in the February 2021 issue of Maclean’s magazine with the headline, “The danger of one party.” Subscribe to the monthly print magazine here.