The sad politicization of Pride

KC Hoard: Pride parades, when stripped to their most core elements, are public acts of resistance against the powers that continue to limit queer people’s rights 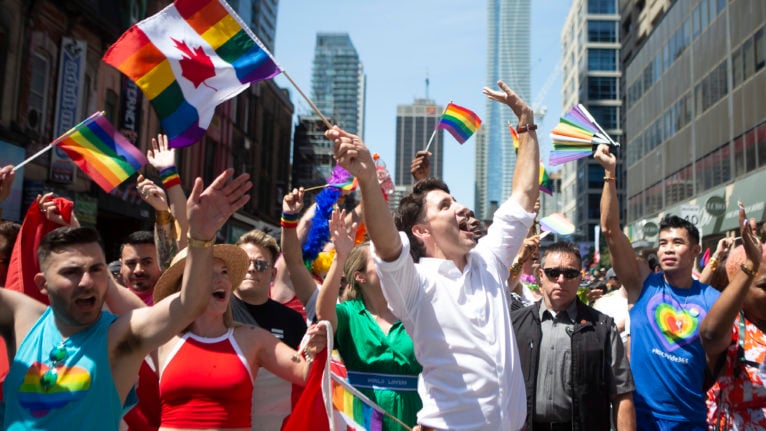 KC Hoard is a freelance journalist whose work has been published in the Globe and Mail, National Post, Xtra and Broadview.

Pride was, is, and will always be a riot. That’s an adage fervently shared within the queer community—one that conjures a sense of unity in the face of political oppression, a connection to a generation of elders wiped out by AIDS, and a reminder that the fight for LGBTQ2+ equality is not over.

But Pride’s riotous essence has been obscured in recent years by the presence of the very institutions that have always been the queer community’s most dedicated oppressors. Uniformed cops, politicians and corporations have inserted themselves into Pride parades over the years, establishing themselves as false staples of the institution along the way. What was once a middle finger to society’s rigid sexual and gender conventions has now become a sanitized opportunity for those in power to perform support for the LGBTQ2+ community while continuously failing to use that power to enact real progress. Even in a rare year where Pride parades are not taking place as a result of COVID-19, they continue to be politicized in superficial ways.

Justin Trudeau made international headlines when he became the first sitting Canadian prime minister to march in a Pride parade in 2016. It was a move that was emblematic of his first-term “sunny ways” approach to politics; he pledged to shift the Overton window and make public shows of support for minority groups as if it were the new normal for Canadian politicians. But public shows can only go so far. Despite a number of promises to end discriminatory policies, the government led by Justin Trudeau has made little progress since his election in 2015.

A ban on men who have sex with men from donating blood continues to exist under the Trudeau government despite the Liberals promising a full end to it in both their 2015 and 2019 election campaigns. Trans people who were assigned male at birth and have sexual encounters with cisgender men are also considered “high-risk” when they donate blood, and can be rejected or deferred from donating. In 2016, the ban was reduced to those whose last sexual encounter was less than a year before donating; in 2019, it became three months. Both reductions were implemented by the Trudeau Liberals, but for many in the queer community, anything short of its complete termination isn’t enough.

The ban first came about during a bygone era when events like the 1980s tainted blood scandal, where over 2,000 people were infected with HIV through blood products, came to define gay men as modern-day lepers. We now know that HIV, if treated regularly, is not transmissible, nor is it a death sentence. The blood ban does not represent these facts, and the government’s continued decision not to end it is discriminatory, and prevents blood banks from receiving much-needed donations.

That sexually active queer men cannot give blood is not the only mark on Trudeau’s track record. HIV non-disclosure laws, which allow HIV-positive individuals to be charged with sexual assault if there is a “realistic possibility of transmission” and they do not disclose their status to their sexual partners, have not been struck down by the federal government despite widespread condemnation by both medical professionals and human rights activists. HIV continues to be heavily stigmatized—a 2017 survey by Casey House, a Toronto HIV/AIDS medical centre, showed that 70 per cent of Canadians polled would be “ashamed” to share their status if they were diagnosed with HIV. This stigma reduces the incentive for those with HIV to disclose their status and some argue that the existence of these laws provides legal standing for discrimination against those living with HIV.

MORE: Trans people cannot be erased. We have always existed, and will continue to live.

Although former attorney-general Jody Wilson-Raybould officially asked prosecutors to not pursue HIV non-disclosure charges in 2018 and the Parliamentary justice committee recommended serious reform in HIV non-disclosure policy in 2019, convictions continue. HIV disproportionately affects queer people, Black people, and Indigenous peoples. Nearly half of Canadians with HIV are either Black or Indigenous, and just over 40 per cent are men who have sex with men. Though Canada does not officially collect data on the amount of trans people living with HIV, studies show that they are also at a higher risk of contracting the virus. These statistics make it overwhelmingly clear that the government’s decision to criminalize HIV is both a queer issue and a race issue.

Despite these failings in his LGBTQ2+ policy portfolio, Justin Trudeau won the 2019 election against Andrew Scheer, whose campaign was haunted by his frustrating inability to admit that gay marriage is morally correct and his adamant refusal to participate in Pride parades. Ever since Trudeau marched in 2016, Pride parades have become safe spaces for politicians to wage moral warfare on each other by competing over who seems the most gay-friendly. But perceptions only run skin-deep. When these values are not represented in policy decisions, politicians marching in Pride parades reads more as virtue-signalling than true allyship.

And while physical Pride parades across the world have been effectively halted by COVID-19, they continue to be used as political pawns. Peter MacKay, in a transparent attempt to differentiate himself from Andrew Scheer, declared early on in his leadership campaign that he would march in Pride.

But for many queer folks, MacKay’s hypothetical presence at Pride reads as hollow. In May, he made headlines for rehashing his controversial decision to vote against a 2012 gender identity bill.   The bill sought to add gender identity to the list of protected groups in the Canadian Human Rights Act, and in 2017, it was passed in the form of Bill C-16. He called it a “bathroom bill,” which refers to the practice of allowing trans people to access bathrooms which correlate to their gender identity. “Bathroom bill” is largely viewed as derogatory by members of the queer community because it dismisses trans people’s wish for legal equality as a simple desire to use bathrooms that correspond to their gender identity rather than a necessary battle for their human rights.

MacKay used this dissent to differentiate himself from Erin O’Toole,  his main opponent in the Tory leadership race. O’Toole voted in favour of the bill.  But O’Toole’s history as a queer ally is hardly spotless: he has stated that he will only participate in Pride parades if uniformed cops are also permitted to march. Uniformed police officers were banned in several Prides across Canada after Black Lives Matter Toronto conducted a sit-in at their city’s parade in 2016. They called for the removal of uniformed police who have historically been on the frontlines of the oppression of Black and queer Canadians.

The first Pride parades, which started in Chicago, Los Angeles and New York City percolated in the United States in 1970, fell on the first anniversary of the Stonewall riots. These were a series of New York City protests led by queer patrons of the Stonewall Inn who were fed up with police officers and politicians barring them from being themselves. The Stonewall riots are largely credited as being the inciting event of the modern queer rights movement.

Pride parades, when stripped to their most core elements, are public acts of resistance against the powers that continue to limit queer people’s rights. For those same powers to use Pride to score political points goes against Pride’s most essential purpose, which is to riot against the systems that discriminate against the LGBTQ2+ community.