The science of denial

Mark Kingwell: What happened to humility, more education, and a great deal of open discourse? It’s not me, you or some other person with an M.D. or a Ph.D. who matters, it’s good arguments that should prevail. 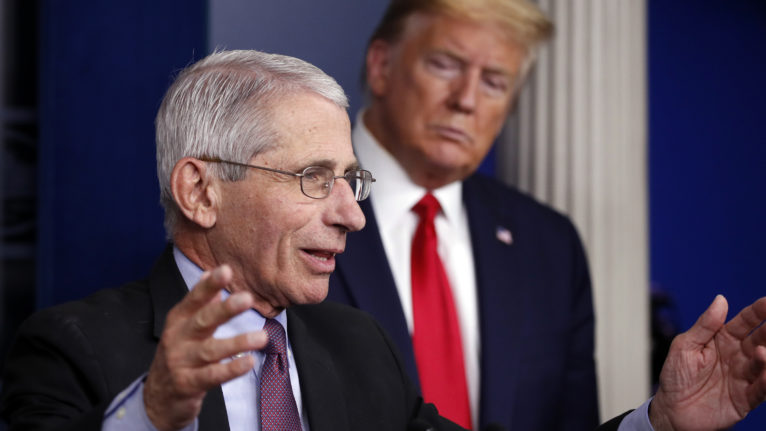 Donald Trump watches as Dr. Anthony Fauci, director of the National Institute of Allergy and Infectious Diseases, speaks about the coronavirus in Washington on Apr. 22, 2020. (CP/AP/Alex Brandon)

Mark Kingwell is a professor of philosophy at the University of Toronto and author of Wish I Were Here: Boredom and the Interface, which won the 2020 Erving Goffman Award.

Peter denied his association with Jesus three times before the cock crowed, at least as Luke tells it, but nowadays denials are a lot easier. Just one will do, and you can make it at any time of day on Twitter or Facebook, or some other dependency-creating interface. Deny science, deny experts, deny social and legal norms, and above all deny responsibility for any ethics scandals, cronyism or accusations of bad governance.

Denial does feel life-affirming. It places me against the man, or the mob, or the whoever. But it is also the first of Elisabeth Kübler-Ross’s five stages for dealing with grief. You have some work to do. Denial ain’t just a river, as Mark Twain probably did not say.

Sure, you can always adopt some Trump-era version of “never apologize, never explain,” and thus secure your membership in the current version of the 19th century know nothing party. Insincere performative apology is another attractive option.

MORE: The look on Donald Trump’s face when he’s been proven wrong

Lots of people know nothing. Some of them know that they know nothing, and make that a guiding principle in life. This is the good kind of ignorance.

The record indicates that Socrates, directed to the Oracle at Delphi, was told that his fate was to be the wisest of Athenians. Since he, a simple soldier and cobbler, knew that he was ignorant, it seemed clear that wisdom might reside in knowing that he knew nothing. Michel de Montaigne struck a medal with the sceptical slogan: Que sais-je?—what do I know?  In philosophy class, we sometimes call this de doctrina ignorantia. We start from a lack of knowledge, but with lots of questions, especially for those who claim to know.

Things get tricky when knowledge becomes increasingly complex, however, demanding individuals who devote their lives to one special subfield in order to advance it. Non-experts in turn resent and fear these individuals, who sometimes tell them what to do or correct their errors. So people refuse to wear masks even months now into a global pandemic; they won’t take a state-sponsored vaccine even when it becomes available, because it may be infected with government software; and they are led by a president who says he “disagrees” with Anthony Fauci, a doctor who actually knows what he’s talking about. Trump disagrees, from his vast knowledge of medicine?

Sure, why not. I disagree when my doctor tells me I should stop smoking cigars and ordering Manhattans, but I also believe he is correct. That’s on me.

Denial is a deeply human act, hardwired into our feeble brains, and actually not a function of ignorance. Fauci was recently chided by one writer for neglecting, as a scientist, the science that illustrates how prevalent denial is in the species. This seems, at the least, extremely unfair. Fauci’s specialty is epidemiology. He’s not a social psychologist. And even if denial is common in us, does that make it okay? Hate is rampant in human affairs, and violence, and torture, and irrational prejudice of all kinds, and host of other behaviours that are “natural” yet abhorrent. We don’t, at least in our better moments, simply give them a free pass.

But the criticism does highlight two salient features of current COVID-dominated political culture. The first is that expertise, always a fragile property, has become suspect. The old saying has it that an expert is a person who has read one book; these days, you don’t even have to do that much work. A few hours on websites and you are surely the smartest person in the room—even if the room is just your basement office.

The second is that calling people stupid is not the best way to make them act smart. You don’t rehabilitate an addict by calling him or her names. You need structure and therapy and support; also nudges, incentive schemes and social scaffolding. And more information will mostly not help.

Trust in experts has been eroded for good reasons and bad. The good include fake science journals, institutional arrogance and aggressive scientism wielded as moron-bashing ideology (yes, I mean Richard Dawkins and Daniel Dennett and their fellow “Brights”). But reflexive and comprehensive suspicion of elites, East Coast elites, Laurentian elites, or whatever is the going version right now, is just doubling down on dumb. That denial tactic may work—it may even get you elected to high office—but it is harmful, immoral, and sells short the stocks on the human-potential market.

In the best case, expertise represents a preponderance of evidence and accumulated scholarship, rather than simply flashing credentials or invoking institutional heft. That’s good scientific method: this is not the universal truth, just the best explanation so far. Sane people can work with that. But other people will still deny because of confirmation bias, motivated reasoning, fear of cognitive dissonance, the pleasures of solidarity, sheer contrarianism, and maybe a misplaced, harmful belief in “individual freedom” over community safety.

So then what? Well, how about large doses of humility, more education and a great deal of open discourse? John Stuart Mill was right—in the marketplace of ideas, good ones can eventually drive out bad, but this is painful, costly and bloody. It’s not me or you or some other person with an M.D. or a Ph.D. who matters, it’s good arguments that should prevail. This is creative destruction. If science teaches us anything, it’s that previous thinking never lasts. Philosopher of science Karl Popper influentially argued that every scientific proposition must be falsifiable—not wrong, rather open to being shown wrong on its own terms. Otherwise it is faith, ideology or madness.

Falsifiability is a baseline standard of all good discourse, yet it’s often misunderstood or distorted by media positioning and political posturing. For example, take note, in this political moment, that determining the meaning of “free speech” has become its own species of luxury good. A lot of hefty, credentialed, big-platform people (most of them experts in nothing except sounding off) are squawking about cancel culture and ideological targeting, not really on principle but because their special privileges feel threatened. But using “freedom of speech” as a conceptual cudgel in your ideological battles against “mobs” is not classical liberal thinking. It’s just a dog whistle in the culture wars. Denial is as denial does.

Hate speech, plagiarism, pseudoscience, cynical falsehood, and self-serving nonsense are not free speech. They are toxins to be eliminated by the clean air and sunshine of reason. At the same time, a lot of what is called censorship these days is actually vigorous disagreement, calling out bulls–t, and speaking truth to power. (We have to leave room for self-serving nonsense, since without it there would be mostly silence.)

There will always be deniers, of anything and everything, just like there are conspiracists, demagogues and witch-hunters in every historical moment. They can’t be eliminated, they can only be made outliers. Maybe at some point, like all responsible people, they will admit that they were wrong. The willingness to acknowledge error is, rather than our top-of-the-food-chain smarts, what makes us homo sapiens.

I might be wrong about that, or dishing up some self-serving nonsense. What do I know? I’m sure lots of smart people will now tell me.