Stephen Maher: What is the Conservatives' position on electric vehicles? The answer is unclear and it says a lot about the choices on offer in this election. 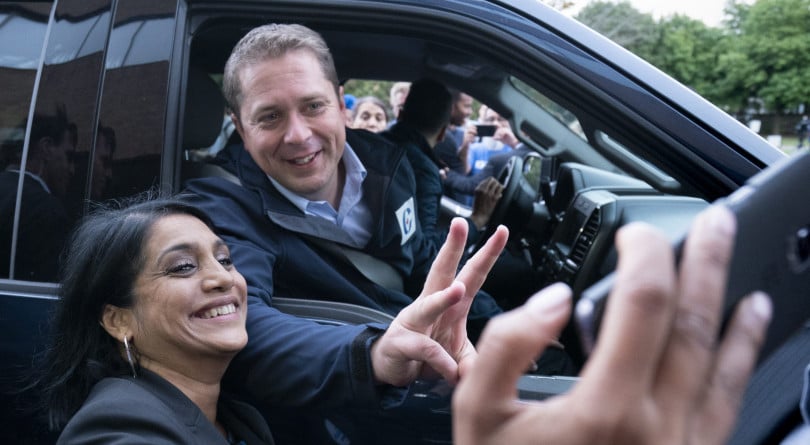 Scheer poses with a supporter during a campaign stop in Brampton, Ont. on Sept. 13, 2019 (THE CANADIAN PRESS/Paul Chiasson)

“We have assured Canadians that we will continue this program until the end of the schedule,” Scheer said. “But we must recognize another fact. The most popular vehicle in Quebec is the F-150. Quebecers are going to continue to buy gas. And I prefer, I have made my choice. I prefer our own gas to gas from the United States. It doesn’t make sense for money from Quebec to leave Canada for the economy of Donald Trump when we have reserves.”

First off, gasoline, like money, is fungible. Gas from the United States, Venezuela or Saudi Arabia is the same as gas from Alberta, and the idea that we should prefer burning good old Canadian gasoline makes as much sense as arguing that it’s unpatriotic to drink California wine.

We hear this argument a lot because it’s a rhetorical device used to support pipeline construction, but it doesn’t stand up to the slightest scrutiny.

READ MORE: The missing ingredient in this federal election

Secondly, notice the speed of Scheer’s pivot from a discussion of electric vehicles. It is the same in his climate policy, which he released a few months after the 2019 Liberal budget, which included a $5,000 subsidy for every electric vehicle. Scheer’s plan says nothing about electric vehicles except for some happy talk about improving charging technology.

Happy talk is good, but the government Scheer wants to replace had just announced a detailed, costed plan to promote electric vehicles, including $130 million on a program to build charging stations, partly to fill in the gaps on the highway system so electric cars are more practical for long trips.

If we are to reduce Canadian greenhouse gas emissions and meet our international commitments, reducing the chances that we will all die in a climate catastrophe, this is the kind of step governments must make.  Transportation accounted for 174 million megatonnes of Canada’s emissions in 2017, second only to oil and gas production at 195 megatonnes. It is possible to dramatically reduce those emissions fairly quickly, although we can expect the people who sell oil and gas to do everything they can to  fight that kind of change.

In civilized Norway, plug-in electric vehicles have already overtaken gas burners. To encourage rapid uptake, Norway has offered electric motorists free parking, tax breaks, access to bus lanes and exemptions from road tolls. It is also easy to charge electric vehicles there. There are 7,632 charging stations. In massive Canada, there are only 5,841.

The Liberals have a plan to have all vehicles on the road in Canada be electric or hydrogen-powered by 2040, and have rolled out policies aimed at pushing us toward that goal.

What would Scheer do? He has not said, so we have to guess.  It seems reasonable to think he may pursue policies similar to the Ford government, which have slowed the spread of electric vehicles.

The previous Liberal Ontario government offered rebates for electric vehicles and had made changes to the building code that would have required that new homes be built with 200-amp panels, so that it would be cheaper and easier to fit them with electric vehicle charging stations. Home builders objected, complaining that the change would add $500 to the price of each new home, so in May the Ford government quietly removed those requirements from the building code, which means that it will be much more expensive to refit buildings later to install charging stations.

Graham Inglis, who runs a Mississauga company that installs charging stations, says it typically costs $1,500-$2,500 to upgrade electrical service after a home is built, so the changes to the building code don’t make sense. “It’s a short-term solution that might not have the home owner’s long term interest in view,” he said in an interview on Friday. “It might save them a little bit of money now, but in the end they’re going to need a service upgrade.”

Ford’s changes to the building code do nothing to encourage the adoption of cleaner technologies.

There was a time when politicians on both sides of the partisan divide were equally likely to make progress on environmental issues. Sir John A MacDonald protected the hot springs at Banff. Republican Teddy Roosevelt built the U.S. national park system. Richard Nixon signed the Clean Air Act. Brian Mulroney and Ronald Reagan made a crucial deal to end acid rain. Those days are past, and now arguments over energy and the environment are the sharpest point of partisan division.

It increasingly seems as though conservative political parties have been captured by a free-spending petroleum industry that is in a fight for survival. Politicians closely associated with the industry often seem to act not just in the interests of taxpayers skeptical of costly subsidies to green-tech boondoggles, but as representatives of an industry that sees cleaner technologies as an existential threat.

Scheer, for instance, opposes the adoption of cleaner fuel standards in Canada, essentially taking Donald Trump’s side in a continent-wide struggle over how much pollution our cars produce.

Some influential commentators in the Canadian media have suggested that there is not much to choose from between the Liberal and Conservative climate plans, since the Liberals have not shown how they will reach their emission reduction targets. This is a careless misreading of the choices Canadians face.

The Conservatives have made a credible argument that they would act more quickly to rein in deficit spending than the free-spending Liberals and make all important decisions based on what will put more money in the pockets of consumers.

The Liberals have made a credible argument that they would reduce emissions more quickly and support the industries of the future, like electric vehicles.

It is up to voters to decide which priority is more important to them. Amid all the mud-slinging about blackface and planes and passports and the character flaws of the leaders—the necessary rough and tumble of an election campaign—it would be a mistake to think that there is not a choice between the parties on this question.

It could not be clearer.