Tabatha Southey: While the president was busy condemning 'A Very Stable Genius,' Trump altogether missed another must-read published on the very same day 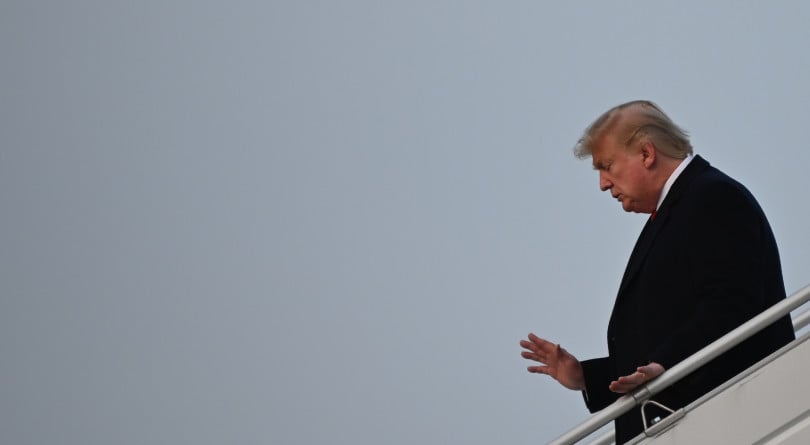 U.S. President Donald Trump arrives at Zurich International Airport on Jan. 21, as he prepares to travel to Davos, Switzerland for the World Economic Forum. (Jim Watson/AFP via Getty Images)

On Jan. 18, President Donald Trump—to the amusement of all and no doubt the delight of the book’s publicists who showed great restraint in not running down the street shouting out “FOR IMMEDIATE RELEASE: Wheeeeeeeeeee!”—tweeted his condemnation of A Very Stable Genius to 71,453,880 followers.

If I could bring myself to subscribe to the “Donald Trump is Playing 4D Chess” theory, even on a bi-monthly, one year, no obligation free trial and you get a bonus tote bag basis, I would argue that in hugely boosting the profile of A Very Stable Genius as he did, Trump was trying to distract from another book that was released the same day.

A Very Stable Genius is a new insider account of the Trump White House by Pulitzer-winning Washington Post reporters, Carol Leonnig and Philip Rucker, and it’s a fine book. Indeed, it’s a spectacular book. Honestly, as a work of investigative journalism, on just about every page, A Very Stable Genius manages to prompt the kind of “How is that even possible?” gasp usually reserved for great pop-up books. It’s a 465-page blow-by-blow account—many of the blows were already known, but Leonnig and Rucker provide new and often bloody detail—of life on seriously low-gravity Planet Trump. It’s damning and alarming and yet, for all the riveting dysfunction discovered or at least explored in A Very Stable Genius, anyone with a stake in preserving Trump’s legacy, or merely securing him another term’s worth of terrible judicial appointments, had better hope the world is reading it this weekend and not Unmaking the Presidency by Susan Hennessey and Benjamin Wittes, the book with which A Very Stable Genius shared a publishing date.

READ MORE: The time for Trudeau to draw a line with Trump

Wittes founded Lawfare in 2010 and its current resounding success rests in part on its novel formula of bringing in writers and podcast guests about which the audience likely knows next to nothing, but who know a hell of a lot about the subject at hand. The more conventional current affairs show formula is of course to showcase the opinions of people who the audience knows far too much about, and who Wikipedia the topic during the car ride over.

I would hazard some percentage of Lawfare’s sudden and immense popularity may be the inevitable result of the 36,809 per cent increase in Google searches for “What? Is that legal? How is that legal?” since 2016.

What the pair have done with Unmaking the Presidency: Donald Trump’s War on the World’s Most Powerful Office is striking. Rarely is anything this sobering this hard to put down. The book is part detailed and comprehensive history of the office of the presidency (“President Grover Cleveland answered the White House telephone each time it rang”), part heartfelt elegy for a functioning political system. Mainly, the question being put to the reader is not, “Is Donald Trump wholly unsuited to be president?” (the authors make no secret they take this as understood), but rather, “In what ways is Trump’s behaviour in office different from his predecessors and how might his behaviour alter the office after he’s gone?”

While acknowledging that Trump possesses nothing approaching a coherent theory of governance, the authors examine Trump’s words and actions not just as personal foibles, a term or two on the nation’s timeline, but as proposed changes to how the presidency should function in the future. What, the reader is forced to consider, would it mean for America if Trump’s view of the office as inseparable from his person—and personal interests—became a generally acceptable position for future candidates to embrace?

Other presidents have lied, but what will an America in which Trump’s proposal that presidents should feel free to lie constantly, blatantly, and often pointlessly, without the slightest hint of embarrassment, let alone fear of political consequences, look like?

Not all of the Trumpian “proposals” explored in the book are shifts that necessarily empower the office of the president but the mixedness of this blessing cannot be overstated. For the moment, America, in fact the entire world, likely benefits from the resourcefulness of those unelected bureaucrats and cabinet officials who take papers that should never be signed off the president’s desk and who slow walk or flat out ignore orders from the president to “Let’s f–king kill him” (“him” being Bashar al-Assad, the president of Syria). But what needs to be considered now is how well will this new norm age?

Unelected bureaucrats and cabinet officials are, it is now well-documented, currently serving not as assistants to the president, but as handlers of him. They are—or at least the best of them are—running the country as well as they are able while doing what they can to prevent the “toddler-in-chief” president from getting up to too much mischief.

Ultimately, this transference of responsibility, this subtle and currently accepted as benign negation of the president’s autonomy, may prove to be as dangerous to the office as an institution as anything unimpeachable presidents freely abusing their power might manage.

READ MORE: The knockout of Donald Trump looks as distant as ever

Key to this view of the Trump presidency is the argument that individual presidents can and have dramatically altered the office, often without acknowledging what they were up to, or even necessarily realizing it. Hennessey and Wittes make their argument in meticulous, lawyerly detail, providing a history of how U.S. presidents have changed, or failed to change, the nature of the presidency. It is an institution that is far more reliant on good faith and convention; on the simple belief, for example, that the oath of office has not only meaning, but power. Hennessey and Wittes show us that soft underbelly.

Notable in the current political book climate, they do so without once using the phrase, “according to a source familiar with William Howard Taft’s thinking.”

In the end, Unmaking the Presidency, devastating in its understatedness, may prove to be the most important book about the Trump presidency. I wish I could believe that with his “Look over here!” tweets promoting “Two stone cold losers’” book A Very Stable Genius, Trump was trying to distract us from the work. Sadly, the definitive answer to any claim that Trump’s tantrums, lies and flubs are strategic is always, can you sincerely imagine him behaving any other way?

I also wish it could be plausibly argued that the seriousness of the subject matter would trouble Trump, that the book’s thesis that he is harmful to the presidency itself would irk him the most, but I suspect that is not the primary reason Trump wouldn’t want you to read Unmaking the Presidency.

The long and the short of it is that much of the strength of the book lies in putting Trump’s presidency in the context of all the other presidents who came before him, and there is nothing, no insult, no setback, no dramatic exposé of their misdeeds and failures that bothers a narcissist as much as being put in context.