The truth about Uber Eats, DoorDash and Skip the Dishes

Corey Mintz: It only took a global pandemic to realize that third-party delivery platforms are absolutely terrible for the restaurant industry. We need that recognition to grow to their treatment of workers, too. 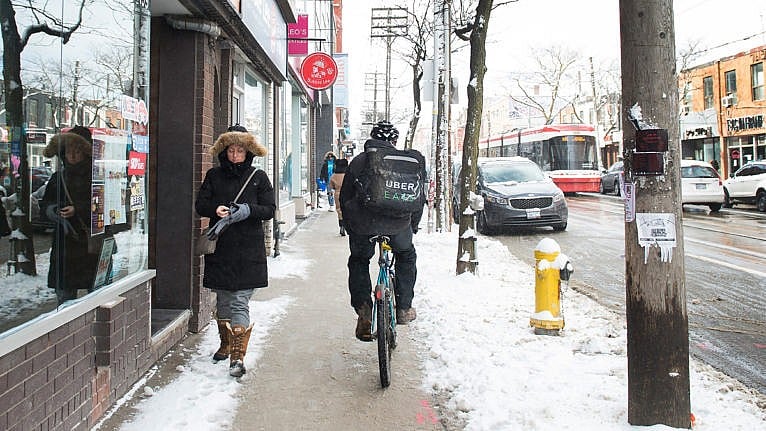 Corey Mintz is a Winnipeg-based food writer and author of the forthcoming fall 2021 book The Next Supper: The End of Restaurants As We Knew Them, and What Comes After.

Only a couple years ago, it was still hard to convince people that third-party delivery (3PD) platforms like Uber Eats, DoorDash and Skip the Dishes were terrible for the restaurant industry. But in the last year, ignited by the dire situation for restaurants around the world, that dirty little secret has broken through to the mainstream conversation. As these companies grew in popularity, industry analysts predicted that takeout and delivery would represent the majority of restaurant revenue within five years, a pace accelerated to a matter of days at the onset of the pandemic.

Finally, we’re starting to understand that gig work is precarious work, and that the “independent contractor” status used by these companies is a tool for skirting labour laws. Most third-party delivery services take a 30 per cent commission from an industry known for a four to 12 per cent profit margin. Big restaurant brands are able to make this work because the demand for their product enables them to negotiate better rates. Grubhub’s first-quarter 2020 results, for example, show that the average net profit from orders through independent restaurants is $4, but through “a partnered national enterprise brand” it’s $0. The apps need major brands but don’t make money from them. So it’s the independents that pay the cost, your local ramen shop subsidizing a sales and delivery service for McDonald’s.

At the same time, these companies continue to be unprofitable.

In 2018, Uber lost $2.3 billion. In 2019, DoorDash lost $570 million. And 3PD uses human labour; that’s considered too costly, of course, despite the low wages. Analysts and industry leaders cast longing gazes instead at drones, robots and self-driving cars, linking their eventual use to the fantasy moment when the sector moves from red to black.

“If we don’t get the [autonomous car]software thing nailed, we’re not going to be around much longer,” said Uber CEO Travis Kalanick in 2016, explaining the company’s investment in the technology. That turned out to be baloney.

In early 2020, California passed A.B. 5, a law that gave employee rights to gig workers. Companies like Uber, Lyft, Instacart and DoorDash took it as a challenge, advancing their own bill, Prop 22, which effectively granted them an exemption to these new labour laws. They spent over $250 million promoting the ballot measure and won; Uber’s current CEO immediately promised to take the fight everywhere.

Within a month, Uber sold off its stake in divisions that had been developing driverless cars and flying vehicles, leaving the exploitation of human labour as the only path to profitability. The classification of workers as “independent contractors” is an essential element of that structure.

In late 2019, Ontario Foodora couriers organized to change that classification. Early in 2020, the couriers won their court case, paving the way for roughly 900 workers to unionize. Two months later, Foodora ceased operations in Canada. So we know they’d rather quit than pay workers a fair wage. In Canada, at least.

Maybe the driverless vehicle ambition was sincere. Maybe it was a ruse. It doesn’t matter. Now that the plan has been discarded, new battles over worker rights are coming. The tech cabal behind Prop 22 not only had the money, outspending the union-led opposition’s $19 million, but the technological capacity to lobby voters directly through their phones. That’s the fight they’re going to take everywhere, with ads and messaging that frame their effort as an attempt to protect jobs rather than protect themselves from the responsibilities of any employer—to provide minimum wage, overtime, holiday, vacation pay, health insurance or the required additional insurance for a vehicle used to deliver food.

Early in the pandemic, cities such as New York, San Francisco, Los Angeles, Denver and Seattle passed temporary legislation capping commissions from 3PD platforms. Ontario shuffled its feet, asking these companies to do so voluntarily. In November, the province finally passed some legislation.

The 3PD conglomerate is moving its campaign, likely to Massachusetts, New Jersey, New York or Pennsylvania. But eventually, they’ll set their sights on the backwater of Canada. We’ve already seen a groundswell of recognition over how these companies treat restaurants. We need that awareness to grow to their treatment of workers. Or, when they engage their war chest to fight labour laws here, we will be sheep to be sheared.

This article appears in print in the February 2021 issue of Maclean’s magazine with the headline, “Anyone order a side of strife?.” Subscribe to the monthly print magazine here.