Stephen Maher: The Liberals may be in control, but if O’Toole keeps pitching himself as a policy nerd with a detailed plan, swing voters might buy what he is selling 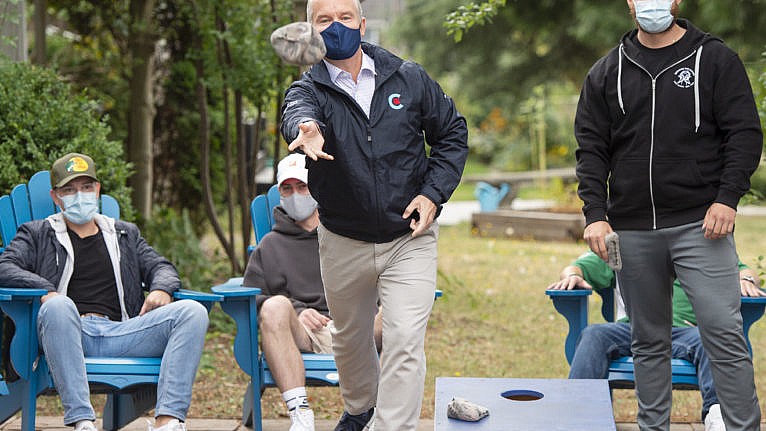 O'Toole plays a game of bean bag toss while campaigning at a drug rehab center on Aug. 22, 2021 in New Westminster, B.C. (Ryan Remiorz/CP)

I was sitting with reporters and staffers from the Liberal plane in a meeting room at Dalhousie University on Monday morning, waiting for the Prime Minister to hold a news conference, when a Conservative campaign official texted me a link to a video of Finance Minister Chrystia Freeland giving a speech Sunday as she kicked off her campaign in Toronto’s University-Rosedale.

That is going too far, but Freeland’s remarks were intense. Dressed in shorts and a Toronto T-shirt, with her hair in a ponytail, she made a dire warning. “Had we not won the 2019 election, I wake up in a cold sweat thinking about that,” she said, waving her arms. “Do you think the Conservatives would have provided the support to individuals and businesses that we did?”

Freeland told supporters that she had tweeted out a video of Erin O’Toole “he talks about privatizing medicare. Can you believe that?”

You shouldn’t believe that, actually, because what he talked about last July, during a Conservative leadership debate, was encouraging more private investment in the system, to find ways to reduce wait times.

“If we want that innovation, we have to find public-private synergies and make sure that universal access remains paramount,” he said, and then referenced the Chaoulli decision, a complicated case in which the Supreme Court came down for a right to buy private insurance, although only in Quebec.

In the video, O’Toole comes across like a confident policy nerd, keen to debate the mechanics of the system. “I’ve run on this for several years, and I do think in the 905, my region, people are open to it if we don’t let the Liberals define us.”

Freeland tried to define O’Toole by tweeting an edited video, which did not include his commitment to ensuring universal access. Twitter labelled her tweet “manipulated media,” which is embarrassing for her and the party on several levels.

In his remarks at Dal, Trudeau defended Freeland’s tweet, pointing out she included a link to the whole interview, and promised more money to address wait times.

The Liberals are not melting down as the campaign moves into its second week, but they are on the defensive.

Conventional wisdom says nobody worries much about how an election was triggered after it gets rolling, but the nightmare in Kabul and the ongoing pandemic have made it hard for Trudeau to put aside the question of why we are having an election right now.

The polls are not clear yet, but O’Toole appears to be picking up momentum, which could make everything much easier for him going forward, if he suddenly stops looking like a doomed loser and looks more like a middle-of-the-road progressive Conservative with some sensible-sounding plans. He appears more credible than his predecessor, Andrew Scheer, whose social conservatism and fake environmental plan basically disqualified him in non-Prairie suburbs.

The election is in its early days—a phony war that will end after Labour Day—so the Liberals have time to poke holes in O’Toole’s plans, but they need to handle him with greater subtlety than they handled Scheer.

It may be possible to accuse O’Toole of planning to dismantle Medicare, but if he makes a consistent argument for a greater role for private providers, voters may pay attention. In a recent international report, Canada came 10th out of 11 rich countries in health outcomes, ahead of only the United States. Socialist Norway, the top country in the rankings, allows private insurance, as do many other civilized countries.

Last week’s Nova Scotia election—which did not go the way Team Trudeau had hoped—hinged on health care, and like Tim Houston, O’Toole is promising to put more money into the system, so the Liberals need to show more discipline in handling this issue than they have shown so far.

The Liberals look concerned but not rattled by the first week. They see unexploited vulnerabilities in O’Toole’s caucus, which is dominated by anti-abortion MPs. O’Toole is pro-choice but much of his party is not. Later, when more voters are paying attention, I expect the Liberals to find ways to highlight that, and good luck to them. It’s worth thinking about.

This should be a better election than the last one. O’Toole’s attacks on Trudeau don’t have the fevered quality of Scheer’s, who acted as if Trudeau was a venal traitor who Canadians needed to exorcise. If O’Toole continues to pitch himself as a patriotic, smiling policy nerd with a detailed plan, offering an alternative, not an exorcism, Liberal-Conservative switchers in Ontario and Quebec might buy what he is selling.

On the other hand, the Trudeau team is not going to make that easy, and their candidate could not be more battle-hardened.

In the last election, Trudeau was in Nova Scotia campaigning for Lenore Zann in Truro when he got news from Time magazine that they were about to break a story about his youthful enthusiasm for blackface. People who were at that event tell me he managed a high-energy rally, grinning and shaking hands like he didn’t have a care in the world, while inside he must have felt like a condemned man. If I were in his shoes that day, I would have called in sick and hid in my room with a bottle of rum, watching TV and weeping, but Trudeau scrummed his way through a nightmare and eked out a minority.

Whether you like the way Trudeau is leading the country or not, it would be foolish to count him out after the first week of a six-week campaign.