The United States-Mexico-Canada Agreement represents a failure of ambition 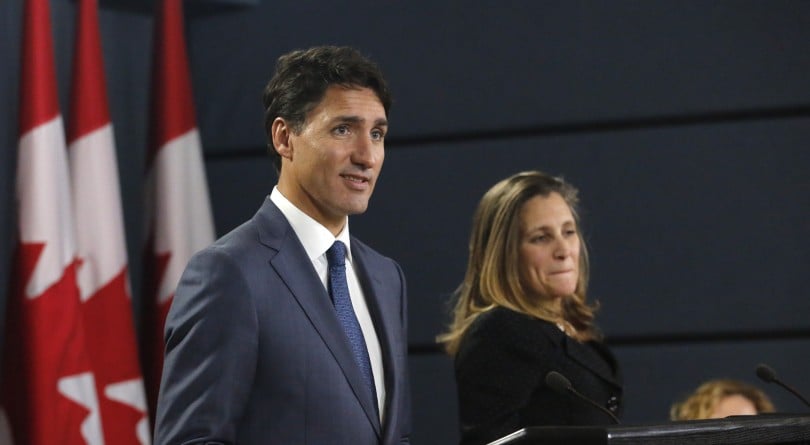 Prime Minister Justin Trudeau and Minister of Foreign Affairs Chrystia Freeland speak at a press conference to announce the new trade with between Canada, the United States, and Mexico in Ottawa, October 1, 2018. (Patrick Doyle/AFP/Getty Images)

Mark Milke is a Calgary author and public policy analyst who has authored multiple studies on government subsidies to business. His newest book, Ralph vs. Rachel: A Tale of Two Premiers, will be released in November.

When faced with an erratic president who wakes up in the middle of the night to tweet his irritations—recall Donald Trump’s past impulse tweets that have called into question the NATO alliance and the American presence in South Korea, as just two examples—perhaps Canadians should be happy the newest United States—Mexico—Canada Agreement treaty on trade (USMCA as it is now called) salvaged anything at all from 1994’s original North America Free Trade Agreement.

It’s akin to a recovery effort when one’s computer crashes: Find a whiz-bang technician and hope that some of the original data can be found when the repair effort starts.

And unlike its predecessors, it’s a document born out of desperation that puts forward no bold vision of a shining-city-on-a-hill, or a better tomorrow.

READ MORE: How NAFTA was saved

Before delving into the USMCA, some background on past free-trade deals and why free trade in general matters might be instructive. The original free-trade agreement between Canada and the United States was not NAFTA, but the 1987 Canada-United States Free Trade Agreement (CUSFTA), effective in 1989. That agreement resulted from the efforts of Canadian Prime Minister Brian Mulroney and U.S. President Ronald Reagan to promote free enterprise at home and abroad.

The deal was controversial only to nativists who defined their nationalism in both anti-capitalist and anti-American terms. At the time, that included the federal Liberal party under its then leader John Turner, and the reflexive anti-free trade NDP under Ed Broadbent. That deal ended up being the main issue in the 1988 federal election, which Mulroney’s Progressive Conservative government handily won; that original free-trade agreement came into effect as of Jan. 1, 1989. In that sense, creating NAFTA by adding Mexico five years later (effective New Year’s Day, 1994) was a follow-up to free-trade initiatives that started in the 1980s.

Those later bilateral and then trilateral free trade initiatives were themselves an addition to postwar movements towards free trade that began, for example, in 1948, with the General Agreement on Trade and Tariffs (GATT), which later became the World Trade Organization. And all that came out of a single one-page memo agreed to in 1941 by British Prime Minister Winston Churchill and U.S. President Franklin D. Roosevelt aboard the HMS Prince of Wales, stationed in Placentia Bay, Nfld.

Somehow, in the deepest, darkest hours of the Second World War, the two leaders looked ahead and added economic free trade to the agreed-to Atlantic Charter. As author Hunter Nottage points out, two clauses (4 and 5) from that Charter were economic. “They refer to the importance of bringing about ‘the fullest collaboration between all nations in the economic field’ and ‘to further the enjoyment by all States, great or small, victor or vanquished, of access, on equal terms to the trade … of the world which are needed for their economic prosperity,’ ” Nottage wrote. In other words, the two leaders looked ahead to how to free the world in every sense—militarily, but also, critically, if the war was won, economically.

The benefits from all this free trade have been splendid, despite the protestations of those 1980s-era protectionists. In North America, since NAFTA came into effect, employment is higher by 40 million new jobs. Not all of those are due to the original free-trade agreement or NAFTA, but as the U.S. Chamber of Commerce pointed out to trade skeptics down south, that country has 5 million new jobs that are attributable to NAFTA. In Canada, which has long been trade-dependent, 3.4 million jobs are dependent on exports to the United States (with or without a free-trade agreement). More broadly, increased trade worldwide since just the 1980s—expanded liberalization with more countries pursuing free-enterprise-friendly policies including freer trade—has resulted in a significant drop in absolute poverty worldwide (defined as about two dollars a day in income), from 44 per cent in 1981 to just 11 per cent by 2013.

In 2015, economists Pablo Fajgelbaum and Amit Khandelwal found that moving from more restricted trade to more open trade can help all consumers, but some more than others. For example, the effect of free trade for the bottom one-tenth of consumers has been stunning: a 63-per-cent increase in real purchasing power. As the authors note, this is because “poor consumers spend relatively more on sectors that are more traded, while high-income individuals consume relatively more services, which are among the least traded.” As the authors wrote three years ago in why free trade matters, this is because there can be a “pro-poor bias of trade in every country.”

So what does the new trade deal get wrong? It does little to eliminate taxpayer-financed subsidies to businesses among the three signatories. Such subsidies—whether to the aerospace, automotive, traditional and green energy, or agriculture industries—are costly. They number in the hundreds of billions of dollars over the decades. A superior free-trade agreement would have worked to ratchet those down over the years in all three countries, and preserve public tax dollars for actual public uses.

READ MORE: ‘A huge disappointment’: A dairy farmer reacts to the USMCA

Likewise—and perhaps illustrative of the lack of a grand vision for expanded free trade rather than managed trade—even the much-ballyhooed changes to supply management under the proposed USMCA are minor compared to what could have been accomplished: completely unhooking Canada’s dairy and poultry sectors from their government-granted cartel status, paying them out over time as Australia did with its formerly protected agriculture sectors, and freeing up trade for that sector, which would have allowed it to grow in export potential over time. By focusing on what might be “lost” in domestic sales, the dairy and poultry industries have always focused on the trees and missed the free-trade forest—that is, the possibility to become a massive export industry for Canada.

READ MORE: Canada’s farmers aren’t a monolith—and for many of us, the USMCA is a good thing

Yes, the new free-trade deal is better than no treaty on trade. The lack of a deal would have completely exposed Canada to protectionist American sentiment from the White House on down. But the USMCA and those who negotiated it lacked the grand vision on the potential for free trade to further prosperity, peaceable relations between diverse peoples, and poverty reduction, which were all elements in past free-trade treaties envisioned from 1941 onwards, from Churchill and Roosevelt to Mulroney and Reagan.