Opinion: The 'new NAFTA' solves a serious crisis in the short term. But Canada made significant concessions—it was always going to have to—and that's a big long-term problem 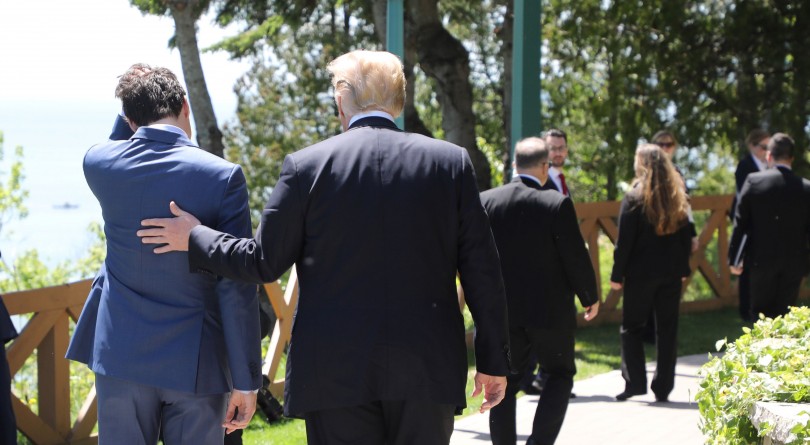 After 13 months of fraught negotiations with the United States, Canada reached a deal in principle on Sunday night to preserve a North American trade agreement. The Liberal government is billing it as a “modernization” of the decades-old scheme, and Donald Trump has put his imprimatur on it, though not quite in gaudy gold even if America is now literally first: NAFTA has been renamed the “United States, Mexico, Canada agreement,” or the USMCA.

In the text and the pageantry surrounding this enormous announcement, the historically minded might hear echoes of “The king is dead, long live the king!” or perhaps even “Look upon my works, ye mighty, and despair!” But perhaps the best historical quotation and perspective for this “new NAFTA” goes as far back as the fifth century BCE, when the Athenian historian Thucydides pointed out that “the strong do what they will, the weak suffer what they must.”

The strong in this scenario? Well, that’s America: Populous, wealthy, militarily mighty. And the weak, then, is Canada. After all, as much as each side in the new USMCA agreement now has an interest in singing the praises of the process (Prime Minister Justin Trudeau called it “win-win-win”), of declaring it a great cooperative achievement among friends, that’s not quite right. While the benefits of trade might be mutual for some, Trump’s approach was competitive, indeed zero-sum, and the final product, while not without its merits, is replete with Canadian concessions that risk doing long-term damage to the country’s businesses and consumers.

In exchange for a new trade deal, Canada caved to increased drug costs through longer protection periods for biologic drug patents against generic competition and longer copyright periods—two concessions the United States was pushing for. Canada has also conceded space for dairy competition, which some welcome as a means to cheaper milk and cheese, but others warn will undermine the domestic industry and introduce an inferior product to our marketplace. U.S. steel and aluminum tariffs, levied through Section 232 of the American Trade Expansion Act of 1962, as a (bogus) national security measure, remain in place. Auto tariffs threatened by Trump will not be introduced, but there’s no evidence to suggest that the president, as mercurial and maniacal as he may be, would have initiated them anyway—especially given the damage they would have done to power brokers close to him, the White House, and Congress.

READ MORE: ‘A huge disappointment:’ A Canadian dairy farmer reacts to the USMCA

But what other choice did Canada have? Because of accidents of history and geography, it couldn’t have really happened any other way. Canada is, after all, a country birthed from the United Kingdom’s struggle against becoming American. The colony’s—and, later, country’s—expansion and battle to securely set the border along the 49th parallel was evidence of this, as were the literal battles fought by the United Kingdom in 1812 to preserve itself against a belligerent, expansionist United States. George Grant’s 1965 essay Lament For A Nation sounded the horn about Canada’s increasing reliance on America back when then-prime minister Lester B. Pearson accepted U.S. warheads on Canadian soil. And now, the country that outnumbers Canada in population by a factor of nearly ten, and economically by just a bit more than that in terms of GDP, has sought to extract as much as possible from its northern neighbour through “cooperation,” though with a bit of a slant—cooperation-plus, they might want to put it. It’s bullied cooperation through trade, defence, and cultural infusion. Canada has resisted it on occasion—staying out of the Vietnam War and the Iraq War, for instance—but typically we join up or give away just a little here, just a tad there. And so with this “new NAFTA,” we have once again.

The specifics of this semi-cooperative dynamic might be new, but the form isn’t. For the reasons you’d expect, including proximity, cultural similarity, broadly shared economic and political systems and, now, integrated supply chains, Canada has made the United States its top trading partner—our first, their second. As the Office of the United States Trade Representative writes, total trade between the two countries was about USD $673 billion in 2017. Nearly 80 per cent of Canadian exports go south to the United States. Even in an era where the stuff of trade comprises less and less physical goods, Canada has taken most of its figurative eggs and placed them in a red-white-and-blue basket. So we were going to have to concede, eventually—and we may yet have to concede more down the road.

Indeed, as political scientist Blayne Haggart argues in The Conversation, the fact that the USMCA’s 16-year term includes a “joint review” by all three countries within the first six years suggests that this doesn’t represent a decrease of American leverage, but in fact an increase of its bullying power. And as he notes, Chapter 32.10 is explicit about America’s coercive intent: “It would make it incredibly difficult for Canada or Mexico to negotiate a free-trade agreement with a ‘non-market country,’ which pretty obviously means China,” Haggart writes. “Should one of the USMCA countries do so, the other two could kick it out of the club with six months’ notice. It’s hard to read this as anything but a way to further lock Canada and Mexico into the U.S. orbit.”

There’s Thucydides rising from the grave once again. But here’s the thing about the historian, widely held up as the standard-bearer of power politics: not all quotations are endorsements. Last year, in The Atlantic, Kori Shake argued that far from endorsing this strongman-and-suffering approach to politics, Thucydides was merely recounting that worldview. “In fact,” she writes, “the states that profess those hard-edged sentiments are plunged into ruin by them.” Thucydides seems to be mostly correct, though if around today he’d likely need to adjust his perspective for a globalized and integrated world—just like Canada should, because our current approach to America risks undermining Canadian business and consumer rights one review and trade-off at a time.

It must be said that Canada has worked to try to change this narrative and these dependences, especially with this existential threat to NAFTA. For instance, the Canada-European Union Comprehensive Economic and Trade Agreement (CETA) and the Comprehensive and Progressive Agreement for Trans-Pacific Partnership (CPTPP) represent potentially huge opportunities for Canada to reposition itself in the global world order and reduce our reliance on the United States’ massive economy. But that work needs to continue, despite this agreement, if we intend to be a free-trading nation in the long run with the power to secure agreements that serve our businesses and consumers.

While the USMCA might be fine as a temporary stop-gap as Canada imagines its future in a new world order, going forward we would be well advised to remember the real meaning of Thucydides’s words, especially as we look south at the unraveling of the American republic, and imagine new arrangements that would take more of our trading overseas while protecting our national interests. America is intimidating, and it’s local, but it won’t always be the alpha and omega.