The VP debate: 'What on earth did Trump just do?’ 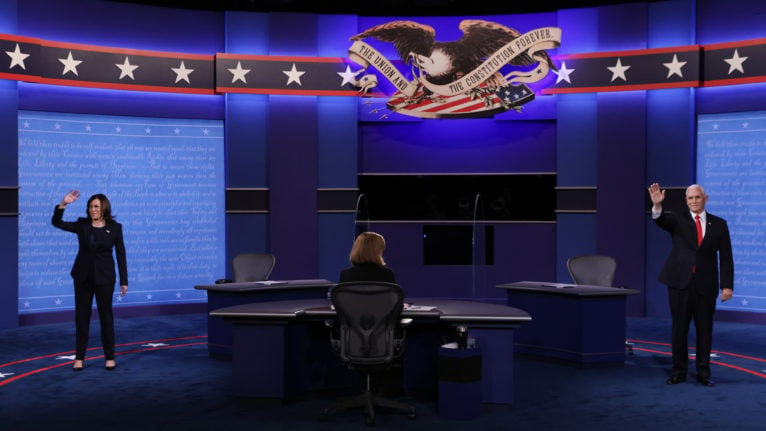 Harris and Pence take the stage for the vice presidential debate at the University of Utah on Oct. 7, 2020 in Salt Lake City, Utah (Alex Wong/Getty Images)

If enough Republican Senators had voted the other way in February on Donald Trump’s impeachment, Mike Pence could be the party’s candidate now. It wouldn’t have covered the party in glory—Pence showed up to the second-stringers’ debate in Salt Lake City with a mildly inflamed left eye, a marked reluctance to answer tough questions, and a bum internal clock that left him chronically talking past his appointed two minutes.

But the vice president did seem, unlike his boss, at least occasionally content to inhabit the same universe as the cause-and-effect continuum in which the rest of us are stuck. And if Trump’s presidency were over, Pence would presumably be spending less time this month fielding two of the most vexing classes of question that bedevilled him at the University of Utah. These can be paraphrased as “What on earth did Trump just do?” and “What on earth will Trump do next?”

For all Kamala Harris’s well-earned reputation as a tough debater, Pence was kept busy enough all by himself, juggling assorted aspects of his personality, his mandate and the moment.

He has always been this administration’s relative good cop, and Trump’s antics last week in Cleveland made it even more imperative that Pence be on relatively good behaviour. But there are not a lot of effective ways to politely defend Donald Trump. So Pence also plainly felt the need to be scrappy. This led him to constantly interrupt Harris and ignore the debate’s time limits, which produced a debate dominated, as was Cleveland’s, by regular battles between the moderator and the Republican. “Thank you, Mr. Vice President,” USA Today Washington bureau chief Susan Page kept interjecting. “Thank you, Vice-President Pence. Vice-President Pence, your time is up.” He never agreed. I’m not at all sure he gained more by talking long than he lost by declining repeated invitations, from two women, to respect agreed-upon rules.

To Pence’s frequent bulldozer moments, we can add his funhouse-mirror moments, when he seemed to figure the best defence was to invert the truth. “Your constant undermining of confidence in a vaccine is unacceptable,” he told Harris, who was arguing only that it should be medical professionals, not a desperate losing incumbent, who determine whether a vaccine is ready. On climate change: “The climate is changing. We’ll follow the science.” It was the kind of statement, not rare enough in politics, that an audience can like only if they don’t believe a word of it. Trump and Pence are running for the votes of people who are serenely confident they’ll ignore the science. Perhaps Pence’s eye was red because he had to battle the mighty urge to wink at the camera as he delivered some of these lines.

Harris was as bruising against Pence as she was, not that long ago in Democratic primary season, against Biden. She, too, is perfectly capable of ignoring a question she doesn’t like. Watching the two of them back away from Page’s perfectly fair question about how old the two presidential nominees are was one of the night’s grimmest entertainments. But Harris brought a more concise command of data and of complex arguments than Biden can manage. She stymied Pence’s interruptions with caustic comments (“Mr. Vice President, I’m talking here. I’m talking”) and monumental stink-eye. She pivoted to autobiography in a way that helped introduce her to millions of voters who don’t know her well. She delivered canned zingers in a way that made them sound effective, not pre-packaged. “If you have a pre-existing condition, they’re coming for you,” she said, straight to camera.

It’s pointless to wish these two, instead of their septuagenarian running mates, were the presidential nominees. Pence could never have won the GOP nomination in normal times; Harris just finished running for the Democratic nomination, and had to withdraw before the first primary vote was cast. It’s clear Pence hasn’t been a big influence in the Trump White House and not yet clear how much of a role Harris would play in Biden’s. This election will still be settled, mostly, by perceptions of Trump and Biden. But it was good to be reminded that another politics, hardly ideal but at least not unremittingly squalid, is possible.