The VP debate: 'Thank you Mr. Vice President—can you let her finish?'

Scott Gilmore: The pundits theorized this crucial debate did not likely change many minds. It's possible that women saw it differently. 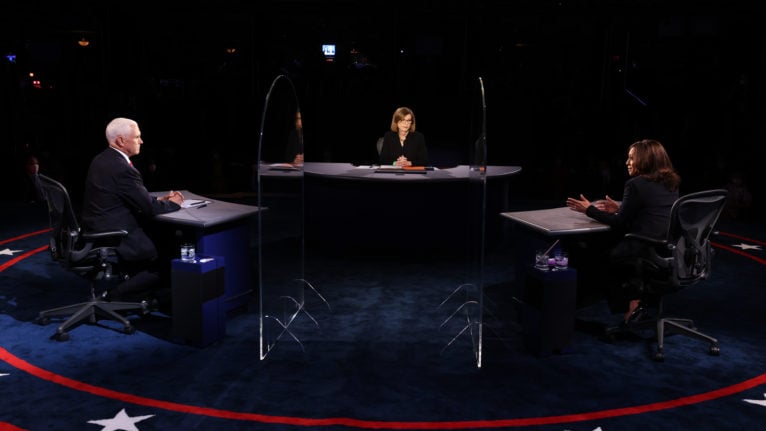 Harris and Pence participate in the vice presidential debate at the University of Utah on Oct. 7, 2020 in Salt Lake City, Utah (Justin Sullivan/Getty Images)

The Vice Presidential Debate is usually a sideshow, if that. It doesn’t matter what is said or who wins or loses. It won’t make news and it won’t change votes. But, like so many other things, this year is different.

First, there is a relatively high chance that the next vice president, be it Kamala Harris or Mike Pence, will end up sitting at the Oval Office desk. Donald Trump is 74, and Joe Biden turns 78 next month, making them the oldest presidential candidates in history. By comparison, Ronald Reagan was only 69 when first elected.

Second, while it is a cliché to claim the “stakes have never been higher”, this year it is hard to argue this isn’t true. America’s stature on the world stage has never been more fragile—alliances are in disarray, rivals are ever bolder, and Washington’s global influence may be at its lowest point since the 1930s.

Meanwhile, the economy is going through the worst setback in decades. Social and racial tensions haven’t been this bad for a generation. Climate change is wreaking havoc from the hills of California to the Gulf Coast (Hurricane Delta is expected to hit Louisiana tomorrow afternoon).

And, as a grim backdrop for it all, the United States is suffering through the worst pandemic in a century. The next vice president will be plunged into the middle of all this, and how they help (or hinder) America’s efforts to recover and rebuild, will matter.

What is more this may have been the last debate of this election. President Trump is sick with the coronavirus. And, even though he has been propped up in front of cameras, his pallor masked with orange face paint, few expect him to be well enough to debate again, or that Biden would even agree to be in the same room as someone infected with COVID-19.

So, for an unusually important debate, Harris and Pence met in Utah tonight—two very different candidates. One an outspoken feminist, the other a soft-spoken patriarch. One African-American, the other so white he could be a supporting character in a Dave Chappelle skit. One a former district attorney, the other a former talk show host turned governor. And although they are only separated by six years of age, they seem to represent two very different generations.

But the biggest difference is their politics. Unlike Canada, where all four national political parties would fit easily within the policy limits of the Democratic Party, Americans have two very different options to choose from.

Kamala Harris spent the evening defending a platform that would prioritize health care, climate action and simply not being chaotic. Mike Pence was not so much promoting a competing platform, but arguing all the Democratic plans would destroy the economy, and the country.

There was a clear attempt by Pence to paint Harris, Biden and the Democrats as radical leftist. Almost every time it was his turn to speak (and often when it was not his turn), he would accuse her and her running mate of coddling communist China, being secret socialists, and of being more liberal than Bernie Sanders.

Harris, for her part, seemed to be running against the GOP record. Most of her responses referenced one Trump failure or fiasco after another. And frankly, between the two of them, she had a much easier job at it. Suggesting Joe Biden, a politician long notorious for hugging the centre of the road, is a dangerous liberal is a hard sell. Only the hard-core Republican base is going to believe that line. But, conversely, the idea that the Trump presidency has been plagued by scandal, confusion and lies is a much more widely accepted.

But, the truth is, tonight just reinforced that if the next president does leave office early, both Harris and Pence would make much better leaders than the man who is there now. And, to the extent either candidate actually addressed policy specifics, nothing new was presented on the debate stage.

Pundits immediately scored the debate a tie, theorizing that no voters changed their minds tonight. But, it is possible that women saw it differently.

In the last election 55 per cent of female voters rejected Trump. Some recent polling indicates that number has grown to 65 per cent. With that being the case, you would think Pence would be making some efforts to win those crucial votes back.

But tonight’s sideshow was mostly one man talking over and ignoring two women. Pence continually condescended to Harris, refused to stop speaking when his time was up, and disregarded the moderator—Susan Page from USA Today. Page spent the evening trying to get Pence to allow his opponent to speak by repeating, politely but fruitlessly, again and again, “Thank you Mr. Vice President… Thank you Mr. Vice President….” The dynamic was likely familiar to a lot of women who watched tonight, and I can only assume it sounded like nails on chalkboard, regardless of their politics.