Opinion: PFAS chemicals are toxic, likely already in our bodies, and will outlive us—and while research continues, towns in Michigan and beyond are finding them in their water 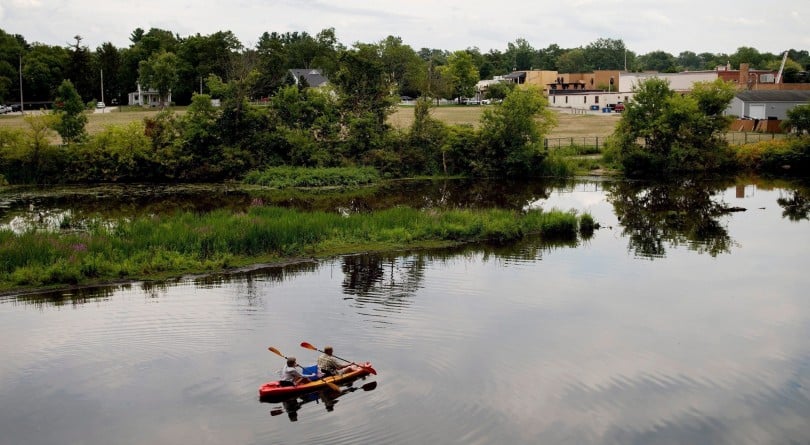 A couple kayak on the Rouge River adjacent to where Wolverine World Wide's tannery once stood, in Rockford, Mich. The Michigan Department of Environmental Quality is investigating the connection between old waste drums in the area and an old Wolverine World Wide tannery waste dump nearby. (Neil Blake /The Grand Rapids Press via AP)

Daniel Macfarlane is a Canadian-born assistant professor of freshwater policy and history in the Institute of the Environment and Sustainability Studies at Western Michigan University in Kalamazoo, Mi., and he received his Ph.D. from the University of Ottawa.

Michigan calls itself the Great Lakes State, which makes perfect sense: Aside from a tiny chunk of its territory on the border with Indiana, the state sits completely inside the Great Lakes basin. No other province or state can say the same. And though the Great Lakes-St. Lawrence system is much more woven into Canada’s national history and collective mythology, no other political jurisdiction identifies as tightly with the sweetwater seas as Michigan, and I say that as a Canadian. It seems like the silhouette of the Great Lakes is on every other t-shirt and bumper sticker here.

But there’s a tragic irony: despite being at the heart of the largest freshwater system in the world, Michigan is beset by water problems. By now, you’re likely familiar with the crisis in Flint, in which people in the largest city in Michigan’s Genesee County were exposed to lead and other pollutants in their water—a crisis that isn’t over, by the way. Meanwhile, my local river, the Kalamazoo, is a long-standing Superfund site because of PCBs from paper mills—and it’s the site of a 2010 oil spill by Enbridge that was one of the largest inland spills in North American history. And within a few hours’ drive of Flint, the state government is giving away clean water for next to nothing to Nestle so they can bottle it and sell it back to us, a problem to which Ontario can relate.

I’ve taught a seminar on the Kalamazoo River, and am currently teaching one on the Flint tragedy. But now there is a new water threat I’m teaching, one with a complicated name that obscures the danger of the toxins percolating beneath the surface: PFAS.

PFAS is the collective name for per- and polyfluoroalkyl substances, a versatile group of ubiquitous synthetic chemicals that includes PFOA, PFOS, GenX, and many others. These chemicals come from a diverse range of sources: shoe weatherproofing, cosmetics, food packaging (like microwave popcorn bags), landfills from industrial activities, and flame-retardant foams used at airports. They can also be passed to humans by the consumption of fish and drinking water.

Michigan, of course, was the site of one of the first PFAS contaminations to receive media attention. In fall 2017, in Belmont, Mi.—just north of Grand Rapids, the largest city in western Michigan—abnormally high levels of PFAS were attributed to Scotchgard that had been dumped decades ago by the footwear company Wolverine Worldwide after they were used to treat shoe leather.

The official legal level for lead in the United States is set by the Environmental Protection Agency at 15 parts per million, but it sets its PFAS exposure bar at 70 parts per trillion (ppt)—not parts-per-million but trillion, meaning a much smaller amount of PFAS is considered unsafe. Yet, the reading from the Belmont dump was reportedly more than 628 times that advisory level.

While people failed to react quickly to the Flint crisis since it affected a primarily racialized community, PFAS might be expected, by that grim reality around race, to garner more worry, because they are being found in white communities, and has been detected in the Huron River, which runs through Ann Arbor, one of the state’s most affluent and liberal bastions. Just a few miles away from where I live and teach, the community of Parchment found PFAS had leached from an old paper mill’s landfill into the drinking water, and they have been identified at other places along the Kalamazoo. In fact, the state estimates that more than 11,000 sites might be contaminated across Michigan.

Worse, you don’t have to live near a past or present industrial site or get PFAS from your water supply. Virtually everyone in the industrialized world likely already has some PFAS inside their bodies. People have been exposed to them for decades since the use of PFAS dates back to the 1940s, with food packaged in PFAS-containing materials, non-stick pans, or through stain- or water-repellent fabrics.

Only in the last decade or so have the human and environmental costs of PFAS been recognized. Like persistent toxic compounds that can biotransfer and bioaccumulate, PFAS are most dangerous for pregnant and nursing mothers and the young. But they can afflict anyone. The different types can cause organ problems along with fetal and developmental issues; they are a hormone disruptor, and there is evidence that they can cause cancer. And those chemicals in our bodies will outlive us: PFAS have been nicknamed the “forever” chemicals because they are so stable and persistent in the environment.

So PFAS are a big problem for a state already beset by water problems—but don’t think Michigan is alone. Other American states are finding them, too, like New Jersey and Texas. Considering how widespread they are, and the scientific and public health uncertainty surrounding them, PFAS have the potential to be the Flint water crisis and the DDT crisis after the Second World War rolled into one.

And PFAS are assuredly in Canada; Canadians are absolutely at risk. For example, in March 2016, CBC reported on PFAS in well water in Mississippi Mills, Ont., and they were found in and around North Bay this past year. A 2018 Commission for Environmental Co-operation study found these contaminants in baby bibs, mats, and blankets sold in Canada. But while Health Canada has updated its draft “safe” levels for many, but not all, types of PFAS—for several different types, the acceptable limit is below 0.0002 mg/L—full health risk assessments are still in the process of being developed in Canada.

That’s what makes it so hard for government to know exactly it can or should do about this toxic suite of chemicals: there’s still a great deal of scientific uncertainty. There are a wide variety of PFAS with different features that can originate from myriad sources, which further complicates assessments of their danger. Different methods are needed to detect the various types of PFAS. Cumulative exposure to low levels over time is potentially hazardous to public health, but it is difficult to detect low ambient levels in the environment. And the various types can transform over time or after mixture with other toxins. The ways that PFAS move through trophic levels and bodies is not even fully understood yet. Experts don’t know if the EPA’s acceptable level of 70 ppt is safe, or whether it’s best to reduce it to 7 ppt—or even to state that there is no safe level of exposure to PFAS, whatsoever.

Expensive home water filters can be purchased or provided by authorities, but those would be hard to access, and only protect against contamination through drinking water. More systemic solutions are needed, from bans of any and all usage of PFAS in products, to funds directed to widespread testing and research, with money earmarked for dealing with any detected threats. Public awareness campaigns should commence immediately. And where we go from there depends on what is found and the emerging science.

After all, if it can happen in Michigan—where the water defines the state, and where people are already on alert after Flint—it can certainly happen in Canada.