This Canada Day, the country must reflect on its history to write its future

Anita Li: Canada must return to its core values—sustainability, multiculturalism and human rights—which have not been upheld in recent years 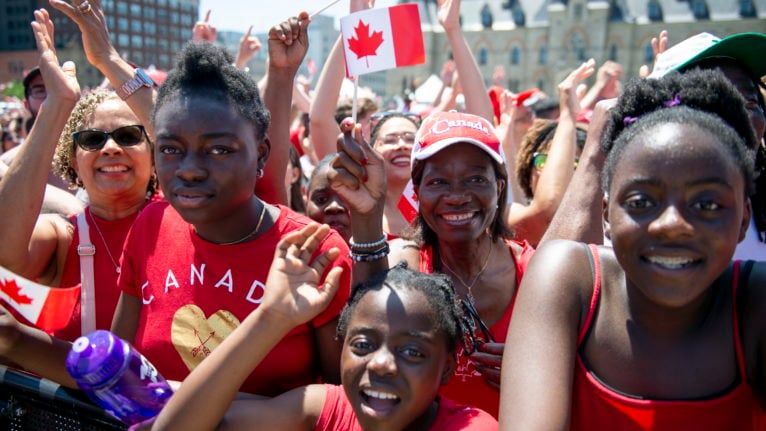 People cheer during the the Canada Day noon show on Parliament Hill in Ottawa on Monday, July 1, 2019. (Justin Tang/CP)

Anita Li has a decade of experience working as a multi-platform journalist at outlets across North America. She is also a journalism professor at the City University of New York and Centennial College in Toronto.

By all accounts, Canada’s bid for a non-permanent seat on the United Nations Security Council should’ve been in the bag.

On the surface, our country shares the UN’s commitment to multilateral values, is considered one of the world’s most stable economies, and has been widely lauded for its efficient and bipartisan response to COVID-19. But a closer look at our track record reveals Canada’s hypocrisy and how far we’ve strayed from the core values that truly set us apart as Canadians on the global stage.

Stephen Lewis, who served as Canada’s ambassador to the UN from 1984 to 1988, blamed the federal government’s “superficiality and insouciance in foreign affairs” for our failed bid against Norway and Ireland. In an interview last month with the CBC, Lewis said that Prime Minister Justin Trudeau’s Liberals need to work harder to match its “rhetoric with performance”, citing Canada’s insufficient international development spending and peacekeeping presence worldwide. Matching rhetoric with performance is something that should also be said about Canada’s national identity.

MORE: Canada needs a plan to rebuild itself. Let the transformation begin.

You can add all the fancy trimmings you want to a house, but if it’s built on a poor foundation, the centre cannot hold. Authenticity from national governments, whose actions shape a country’s national identity, is proving to be a prerequisite for political leaders who want to win the trust of their citizens in a post-coronavirus world. Over the decades, Canada has become increasingly disassociated from the progressive values we proclaim to have, which both results in and stems from a growing disconnect between the government and its citizens. Social unrest and low voter turnout are two consequences of this distrust. To close the gap, Canada’s national identity must be rooted in the apolitical values we’ve historically embraced—human rights, multiculturalism and sustainability—values that surfaced organically from a diverse cross-section of Canadian communities.

As a young, pluralistic nation, we must accept the fact that Canada is made up of a multitude of cultures, including those of 634 First Nations, England, France and immigrants from countries around the world who’ve called Canada home for centuries. One silver lining of the pandemic is that we have the opportunity to pause, take stock of our existing systems and reassess how we want to show up on the world’s stage. To modernize Canada’s national identity for the future, we should look to our past for enduring values that transcended time and politics.

Sustainability is an issue that’s always been in Canada’s wheelhouse, given our proximity to the fast-warming Arctic, reliance on natural resources, large Indigenous population and status as a leading economic power. First Nations, which have existed in Canada for tens of thousands of years, are a foundational source of knowledge for climate change assessment and adaptation. But we haven’t done anything with this knowledge—at least not in a meaningful way.

MORE: On Canada Day, celebrate the spirit of dominion

Human rights have been a cornerstone of Canadian identity since former prime minister Lester B. Pearson won the 1957 Nobel Peace Prize for creating the United Nations Emergency Force (UNEF), the UN’s first-ever peacekeeping operation, which ultimately defused the Suez Crisis in 1956. This moment was a turning point in Canada’s national identity; it marked our independence from the “motherland” because Pearson’s foreign policy deviated from that of Britain, one of the three countries that invaded Egypt during the crisis. Although the Progressive Conservatives initially objected to this policy, they quickly embraced Canada’s peacekeeping role after Pearson received global acclaim, entrenching it as a bipartisan value. In recent years, however, our peacekeeping presence hasn’t lived up to our commitments.

It’s important to note that former prime minister Stephen Harper’s hawkish vision for Canada didn’t stick around, even though he served as head of government for nearly a decade. Whereas Trudeau, carrying the mantle of changemaker from his father and former prime minister Pierre Trudeau, put forward a vision that excited the Canadian public when campaigning in 2015 because it suggested a return to our core values. Instead, Justin Trudeau’s tenure has been marked by a series of disappointments and missed opportunities.

Since Canada’s founding, we’ve exclusively defined ourselves as the loyalists to America’s rebels. This dated identity persists today, preventing Canada from stepping out of Britain’s shadow to truly define ourselves on our own terms beyond frothy symbols like hockey and maple syrup. It’s an antiquated, top-down idea of our country that doesn’t resonate with a growing number of Canadians, especially younger generations. As Lewis suggests, this identity also negatively impacts how outsiders see Canada, limiting our potential to be a real geopolitical player. With the European Union fractured post-Brexit, democracy failing in the U.S. and India, and the authoritarian Chinese Communist Party consolidating its power under President Xi Jinping, a moral vacuum has emerged. Given our soft power and membership in both the G7 and G20, “moral leader” is a role that should come naturally to Canada—but that’s only the case if we practice what we preach.

Our emerging national identity for the 21st century and beyond is a complex one that’ll require ongoing collaboration and conversation. With so many identities making up the fabric of our pluralistic society, it’s essential that Canadians learn to communicate more directly (moving beyond our passive-aggressive tendencies) so we can better understand each other, appreciate our differences, and ultimately work together on the many pressing issues facing our country and the world today.

This unique moment can be Canada’s defining moment. We can show that it’s possible for people of many different backgrounds to rally around shared values. We can prove that it’s possible for a young, diverse country to succeed, despite what the naysayers think. If Canada wants to lead in a modern, post-COVID world, we must finally step into the role that we defined for ourselves so long ago.