This isolation-induced laziness is a privilege. Take it while you can.

Rachel Jansen: With COVID-19 grinding the economy to a halt, it seemed strange to me that we were still so invested in the idea of productivity, especially since the world we’re living in now affords some of us time to slow down 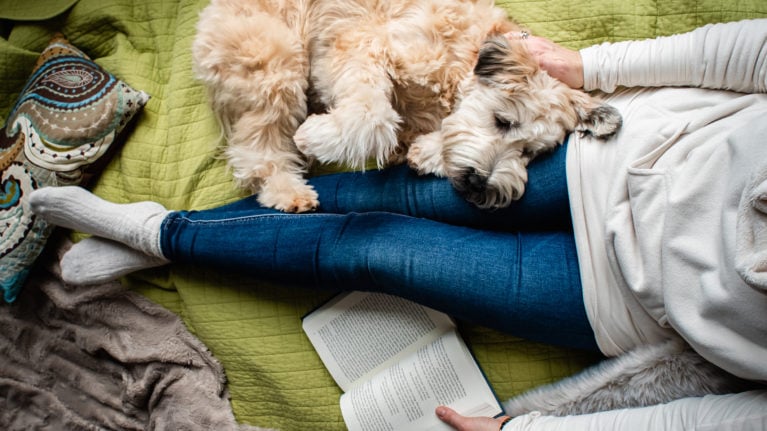 'I now resent the idea that we need to optimize ourselves during a pandemic, to make 'use' of it, as though simply surviving isn’t enough' (Cavan Images/Getty Images)

There’s a moment in the 1998 movie The Truman Show that I keep thinking about. It comes the morning after Truman, played by Jim Carrey, becomes aware that his entire life has been a simulation for people to watch on TV. As an audience member, you’re sure he’s going to wake up and do something different. How could he not? Instead, he and everyone around him continue, eerily, with their everyday routine. In order to escape his new reality, Truman has to pretend that nothing has changed.

When the coronavirus started circumnavigating the globe in March, it altered life as we know it. And, after a brief period of shock, the focus quickly turned to making sure everything was business as usual: classes were moved online, Zoom calls supplanted person-to-person interactions, and online articles everywhere recommended getting dressed for a day at home just like you would for a day at the office.

Any time that was freed up by fewer work and commute hours were immediately repurposed. On my social media feed, people baked multiple loaves of bread, completed 30 workouts in 30 days and learned new languages. I was no exception. In the first weeks after being laid off from my part-time retail job, I was busier than ever, spending my days checking off items from my ever-growing to-do list.

READ: How can we do sports in isolation?

I began to feel like I was on the Truman Show; the script had changed, so why were we all still playing the same parts? With COVID-19 grinding the economy to a halt, it seemed strange to me that we were still so invested in the idea of productivity. I understand the need for normalcy, and being busy can be a powerful antidote for uncertainty, but the world we’re living in now affords us some time to slow down. For many health-care staff or frontline workers, doing nothing isn’t an option. Laziness is a privilege; take it while you can.

Throughout history, great discoveries weren’t made during periods of intense labour, but during periods of idleness. Leonardo da Vinci may be known for his ingenious artwork and inventions, but he was equally known for his procrastination, his doodling and his daydreaming. Isaac Newton’s law of gravity wasn’t thought up during his time at the university, but as he lounged under a tree in the backyard of his childhood home during an outbreak of the bubonic plague. As a university drop-out, Steve Jobs spent years faffing about, with no obvious direction or agenda. In the summer before he and his business partner built their first prototype computer, Jobs wasn’t bent over books in the library but walking barefoot around a commune that sold—surprise, surprise—apples.

It’s no coincidence that all these examples are of privileged, white men. A quick look into these geniuses’ financial histories paints a telling picture: Newton had the luxury of waiting out the plague at his childhood manor; aristocratic patrons supported Da Vinci throughout his career; Jobs may have come from a working-class background, but even his counter-culture attitude had elitist roots (his friend’s wealthy uncle owned the farm, allowing them to live for free).

As a university-educated person with financial security and no dependents, I also have the privilege of being more idle than usual, and it seems a shame to waste that privilege by continuing to partake in a system that only measures people’s worth by their output (unless that output means helping others during the pandemic).

Even embracing idleness in the hopes that it will eventually amount to a great idea down the line is problematic. Author Jenny Odell explains her desire for people to do less in her 2019 book, How to Do Nothing: Resisting the Attention Economy: “I want this not only for artists and writers, but for any person who perceives life to be more than an instrument, and therefore something that cannot be optimized,” she writes.

“Solitude, observation and simple conviviality should be recognized not only as ends in and of themselves,” she goes on, “but inalienable rights belonging to anyone lucky enough to be alive.”

There’s something about the incessant recipe-sharing and online workouts for a quarantine bikini-ready body that smacks of neoliberal capitalist ideals. I now resent the idea that we need to optimize ourselves during a pandemic, to make “use” of it, as though simply surviving isn’t enough.

I recognize that, for many people, that’s where the bread baking and bodybuilding comes into play; it’s the process, rather than the product that’s fulfilling. Personally, I would only be doing those things to prove to other people that I could.

So for me, laziness means spending mornings in bed watching TV, reading and taking hour-long walks through my neighbourhood each day (while trying not to look obsessively at my step count as I do). I’d be lying if I said there isn’t a part of me that hopes genius will strike while I wait for a streetlight to turn green. Maybe one day it will. More than likely it won’t, and I’m trying to be okay with not just doing, but being.

This article appears in print in the June 2020 issue of Maclean’s magazine with the headline, “Laziness is a privilege.” Subscribe to the monthly print magazine here.