To win, Kathleen Wynne first needs to realize she actually is Hillary Clinton 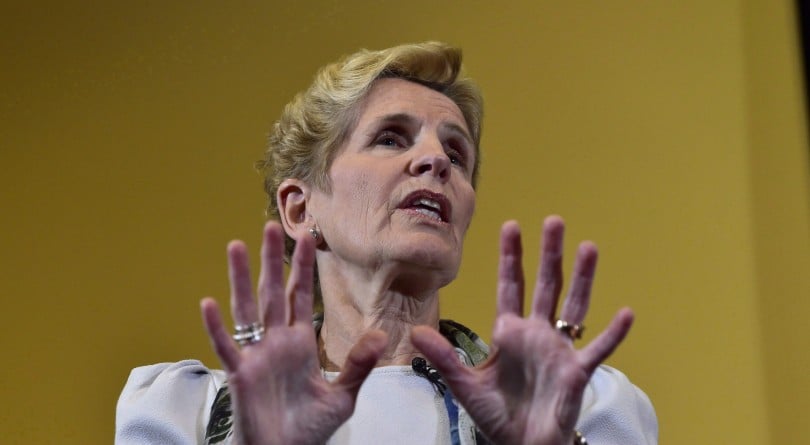 The premier of Ontario got mad on the (pre-)campaign trail this week. So mad, in fact, she adopted the methods of the madman she believes her opponent to be to vent her spleen.

“Doug Ford brought Donald Trump’s ‘lock her up’ brand of politics to Ontario and this morning I called that bullying behaviour out for what it is,” Kathleen Wynne tweeted on April 18. “Ontario is not the United States of America, and we can’t let that happen here.”

Ooh, sounds juicy. So what, exactly, did Ford say about Wynne to get her so worked up?

The PC leader suggested that, when elected, he would call in external auditors to look over the provincial books, so convinced is he of Liberal jiggery-pokery. To this promise, however, Ford added: “If Kathleen Wynne tried to pull these kinds of shady tricks in private life, then there would be a few more Liberals joining David Livingston in jail.”

For Wynne, the presumption of further Livingstons over doctored books was too much. “Let’s just call this out for what it is—Doug Ford sounds like Donald Trump. And that’s because he IS like Donald Trump,” Wynne tweeted.

Except David Livingston—Dalton McGuinty’s former chief of staff—was sentenced to jail for wiping the computer hard drives that contained evidence of Liberal malfeasance over the costs of the 2011 gas plant scandal. And the Ontario Auditor General has slapped Wynne’s government down for using inappropriate accounting to keep billions off the books to hide the true cost of cutting hydro bills by 25 per cent, a policy the AG also said would cost the province an additional $40 billion over the coming decades. All Ford is guilty of doing is betting that Ontarians will be more outraged at these examples of mendacious mismanagement than they will be at him for using déclassé comparisons to point out the fact.

But to be fair, what else can Wynne do but rage about Ford’s tone? Point to her own outstanding record in government? And so on the venting went.

“And I guarantee you—it will get worse before it gets better. We saw it this week when Doug lied—flat out lied—about his appalling comments about families living with autism. Yesterday—he did it again—when he all but chanted “Lock Her Up” talking about me,” Wynne further tweeted.

Speaking of flat-out lies, Wynne’s prosecution would be on much firmer ground if the Ontario Liberal Party hadn’t this week told its own porky pies about Ford, quoting the PC leader in a tweet as saying he “loved the blacks”—something he never said. (He did, however, say “I have massive support from the black community, I love them, they love me.”) They would later pull the tweet and apologize for attributing the quote to Ford, saying instead that it should have been attributed to Trump—which shows how profoundly the Ford-is-Trump focus is entrenched at Liberal HQ—except that Trump never precisely said those words, either.

Undeterred, Wynne ended her tweet storm with the following:

“Because [Ford] may be Donald Trump. But I am not Hillary Clinton. And Ontario is not the United States of America. We can’t let it happen again. Not here, not ever.”

Memo to the premier: Ford may or may not be Donald Trump, but you most definitely are Hillary Clinton. And not because you’re both impressive women who have had successful political careers; Hillary Clinton, trailblazer though she was, represented the status quo in the 2016 presidential election, when the status quo had been busy soiling itself for a generation. Queen’s Park might not be the morass that is Washington D.C., but it’s no Rose Garden either.

The Liberals have been in power for 15 years—well past the best before date of any decent government. And decent hardly describes today’s Ontario Liberals, whose most recent budget is floating like a giant turd in the sea of public opinion data, despite its huge voter bribes. After all those years in power, the electorate is finely tuned to the signals of desperation coming out of the Liberal camp, and have added it to the tally of disappointments from the stagnant government that Wynne, like it or not, represents—much as Clinton, for all her talents and accomplishments, couldn’t shake the view that her candidacy represented more of the same.

“It’s not about me,” Wynne tweeted about midway through her rant. But it is, premier. Elections are referendums on those in power, not those challenging for it.

Moaning about the manners of the guy making the case for change misses the point. Doug Ford is pushing on an open door to get Ontarians out of a house they no longer want to live in—and if Wynne wants to defy the odds and be re-elected, she had better start by looking at herself through the eyes of the electorate and understand they view her and her party as worse than the alternative, no matter how uncouth that alternative might be to her and her increasingly desperate advisors.