Tony Clement and the breakdown in Ottawa

Stephen Maher: The MP was privy to Canada's national security secrets, and his scandal has exposed a failure by all parties to take risks seriously 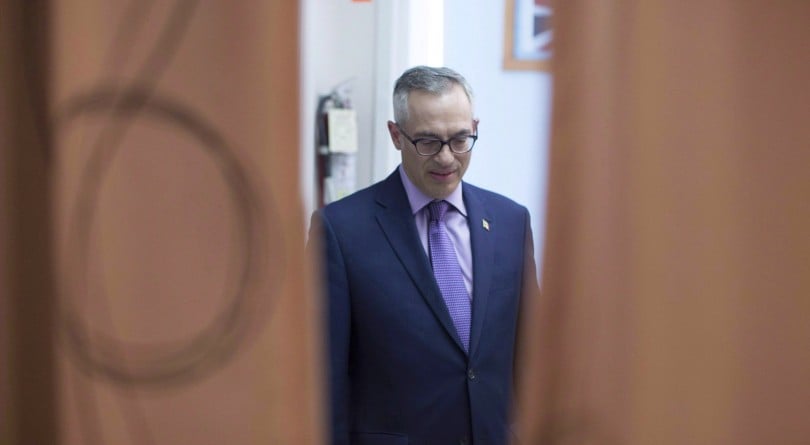 MP Tony Clement waits to be introduced at a rally in Mississauga, Ont., to announce his candidacy for the leadership of the Conservative Party on Tuesday, July 12, 2016. (THE CANADIAN PRESS/Chris Young)

A couple of weeks ago, when I was out with friends at a Thai restaurant in Ottawa, two of the women at the table started sharing stories about Tony Clement’s very online ways.

In a light-hearted way, they discussed how random women they know would wake up to find that overnight Clement had liked a bunch of their Instagram pics.

Given what we have learned since then, it looks like Clement’s late-night “like” binges were a way of digitally trawling for contacts.

Last week, after an online extortion attempt, he was forced to reveal that he had shared intimate pictures with two women on Instagram. Clement wrote in a letter to his constituents that his own “pride and vanity” were to blame, which seems like an accurate assessment.

This sordid business is tragic for Clement and his family, awful for the women with whom he entangled himself—yet another example of a male politician behaving badly, as if we needed one more. It is also a wakeup call to MPs of all stripes, because in addition to letting down his family, his constituents and his party, Clement also let down his country.

According to the most complete version of the murky events, Clement was first threatened with exposure last year by someone seeking dirt about him from a women he’d sent intimate pictures.

Clement brought that to the attention of the Ontario Provincial Police and his party whip, but does not seem to have told them or security officials that he had made himself vulnerable by sending sexual images of himself to someone he had never even met in person.

This failure to act has national security implications, and may have legal ramifications for Clement, who was a member of the National Security and Intelligence Committee, which celebrated its first birthday on Tuesday, just as the Clement story was breaking.

Members of the committee are required by law to report “any change in their personal circumstances that may affect their security clearance,” which Clement didn’t do until a more recent apparent extortion attempt by “foreign actors.”

This is not how a member of the National Security and Intelligence Committee is supposed to behave, and the spies must be fuming, and urgently trying to make sure they are not blamed for this. After all, they screened Clement.

The act requires the members of the committee, drawn from the Senate and the House, to “obtain and maintain the necessary security clearance,” a mysterious and secretive process that likely involves CSIS running records checks, sending a report to an official in the Privy Council Office who sends it along to Prime Minister Justin Trudeau for his approval.

Some time after Clement went through this process, while he was privy to our most important national security secrets, he made himself vulnerable to Canada’s enemies with behavior that was known widely enough to make for idle conversation over Pad Thai.

It is tempting to blame CSIS for failing to uncover Clement’s predicament, but the most recent similar security failure looked like politicians were to blame.

In 2008, when Stephen Harper was about to appoint Arthur Porter as the chairman of the Canadian Security Intelligence Review Committee, he received a letter from then-Bloc Québécois leader Gilles Duceppe warning against the appointment because of financial irregularities in Detroit. After Porter was revealed to have been mixed up in murky Russia-linked arms deals and have taken bribes in a Montreal hospital contract, I called his former associates in Detroit, who told me nobody from Canadian security ever called as part of his vetting. That means either CSIS agents disregarded the letter from Duceppe, or, more likely, that Harper regarded it as separatist nonsense, and never sent it to CSIS.

Many politicians see themselves as members of a separate, superior class of people who need not answer to their inferiors, so it can’t be much fun for the spooks who have to vet them.

The responsibility for making sure this works falls at the feet of the Prime Minister, who set up the committee, but the opposition has not helped.

In August 2017, Trudeau wrote to Andrew Scheer asking for the names of eight Conservative MPs to be considered for appointment to the committee. Scheer wrote back with two names: Clement and Gord Brown (who tragically died in May).

The NDP did the same thing, responding with only one name: Murray Rankin.

I can understand why the opposition parties don’t want the Prime Minister dispensing patronage in their ranks, but the government had good national security reason for wanting more than one name per job, and the opposition ought to have co-operated.

Canada is the last of the Five Eyes countries to create a committee to oversee our intelligence agencies. In the less perilous security environment of the past, when our spies played a more passive information-gathering role, perhaps it wasn’t necessary. But in the darker world we’ve inhabited since 9-11, we have given our spies more resources, powers and responsibilities.

We need a committee like this to keep an eye on them, to make sure their activities are effective and in line with the values of our society, not just the party in power. And we need MPs in all parties to have a better understanding of security issues than you get from reading the paper, so that policy debates are conducted by people who understand what’s at stake.

If it is to work, MPs need to set aside their partisan impulses and act like responsible adults.

Clement can serve as a cautionary tale for MPs in all parties as they pick up the pieces.