Trade sanctions against America won't work. Sanctioning Trump himself might.

Scott Gilmore: Instead of taxing American goods, Canada and the western allies should collectively pressure the only pain point that matters to this President: his family and their assets 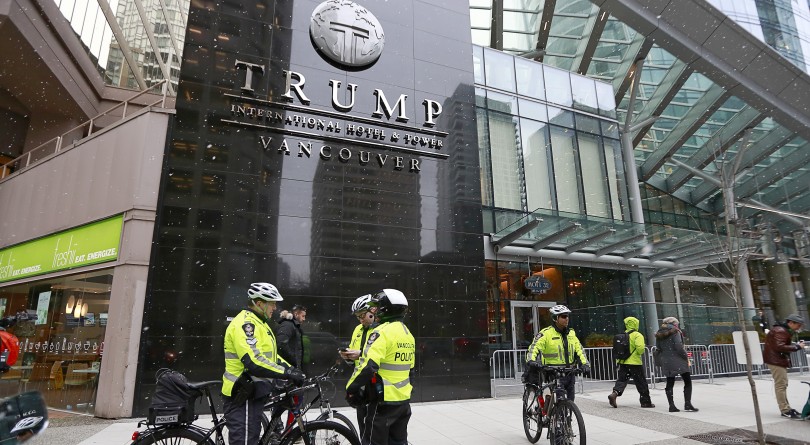 Police officers gather outside the front of the Trump International Tower &amp; Hotel during the official opening on February 28, 2017 in Vancouver, Canada. The tower is the Trump Organization's first new international property since Donald Trump assumed the presidency. (Photo by Jeff Vinnick/Getty Images)

French President Emmanuel Macron, who entertained President Trump with pomp, circumstance, and backslaps could not prevent him from abandoning the Paris Agreement. Germany’s persuasive Chancellor Angela Merkel could not stop him from undermining NATO. And our own government’s exhaustive diplomatic campaign has failed to protect us from the punishing steel tariffs announced today in Washington.

For Canada and the western allies, diplomatic success in the era of Trump has only meant delaying the inevitable. Eventually, with the inexplicable exception of Russia, Trump punches everyone in the nose.

We are fighting back. Within hours Prime Minister Trudeau announced that we would be adding duties to imported American paper products, among many other things. Likewise, Mexico has promised targeted tariffs, hoping to inflict retaliatory pain on those states which are considered the most politically important to the President.

READ: These are all the U.S. products Canada may hit with tariffs, including pipes, pizzas and pens

These efforts, like the diplomatic strategies before now, will not work. If Trump revokes the tariffs, or begins to support NATO, or returns to the Paris Accord, it will not be because our diplomats became more persuasive, our offers more generous, or our tariffs more painful. That is not how this President operates.

As I’ve pointed out before, the President can be successfully engaged, and countries like Ukraine, China, and Qatar have demonstrated this. When they want something from the United States, they skip the State Department, and even the White House staff. Instead of approaching their problem state-to-state, they go state-to-man. These countries focus on what Trump wants on a personal level – to enrich his family. So Beijing granted Ivanka trademarks, Qatar invested in one of Jared’s office towers, and Ukraine, with Slavic candor, simply wired half a million dollars to the President’s personal lawyer Michael Cohen.

READ: How to save NAFTA in one day, by sucking up to Trump

For the most part, the western allies understand that if we want the U.S. to do something we must negotiate with the man himself. What we have not grasped yet is, as strange as it sounds, the President of the United States is more concerned about promoting his interests than defending America’s.

Consider that Trump refuses to censure Russia for interfering in the election, because while it may have hurt America, it helped him. And even though these new tariffs will likely cost the U.S. over 140,000 jobs (according to the conservative Heritage Foundation), he will not repeal them because they make him look strong to his base. Other countries that have figured this out have begun to openly bribe the President to get the foreign policy decision they need.

America’s erstwhile allies must also recognize that the President has adopted previously unimaginable new rules, and play accordingly. But, instead of bribing him with personal carrots, I would suggest we consider applying personal sticks. Instead of asking ourselves how we can help the President or his family, we should ask: How can we hurt him? And, Trump has already given us an answer.

Until this President, every previous modern occupant of the White House divested their assets upon assuming office. This eliminated the possibility personal business interests might benefit from political decisions. Conversely, it prevented others from threatening the President by attacking those assets. Trump, by refusing to give up his businesses, and by flagrantly violating the emoluments clause, has inadvertently handed us the perfect stick.

I propose that instead of taxing the import of American serviettes, we tax Trump. In the spirit of the Magnitsky Act, Canada and the western allies come together to collectively pressure the only pain point that matters to this President: his family and their assets. This could take the form of special taxation on their current operations, freezing of assets, or even sanctions against senior staff. Canada could add a tax to Trump properties equal to any tariff unilaterally imposed by Washington.  The European Union could revoke any travel visas for senior staff in the Trump organization. And the United Kingdom could temporarily close his golf course.

Arguably, the legislation to do so already exists. Canada’s Special Economic Measures Act and the Foreign Corrupt Officials Act permit us to sanction public officials who are “complicit in ordering, controlling or otherwise directing acts of corruption”. In the case of Trump, we already have several open examples of this and the various ongoing criminal investigations (of his own government) are expected to produce many more.

I recognize this column has the stench of bad satire about it. I am sane enough to know this proposal does not sound sane. But I also know we are confronting an unprecedented crisis and one that would have sounded insane if we’d been warned of it just three years ago: the President of the United States is dismantling the entire liberal international order we have spent a century building, and he is completely focused on promoting his own interests, at the expense of American allies, and at the expense of Americans themselves.

Our attempts to use traditional diplomatic strategies to deal with this crisis are failing. If we do not ask ourselves now, “How do we hurt Trump?”, I predict we will reach that point in the not too distant future. In this case, then, delaying the inevitable will not be a failure, not a success.