Trans Mountain shows that investor confidence is collapsing in Canada

Opinion: Kinder Morgan's suspension of non-essential spending on its pipeline is just more proof that these days, businesses aren't as interested in investing in Canada 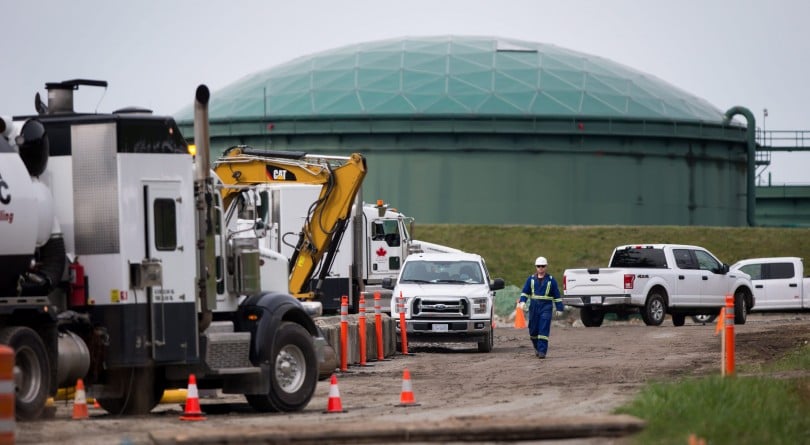 A worker walks past heavy equipment as work continues at Kinder Morgan's facility in preparation for the expansion of the Trans Mountain Pipeline, in Burnaby, B.C., on Monday April 9, 2018. The Houston, Texas, based company announced Sunday it has suspended all non-essential activities and related spending on the pipeline expansion that would carry Alberta bitumen to an export terminal near Vancouver. THE CANADIAN PRESS/Darryl Dyck

Jason Clemens and Niels Veldhuis are economists with the Fraser Institute.

Ottawa can save its money. Despite the announcement that Ottawa will spend almost $300,000 to discern the reason behind the lack of investment in Canada’s energy sector, there’s actually no great mystery about why it’s happening: Canada is becoming a less friendly place for companies to do business.

Kinder Morgan’s recent suspension of non-essential spending on its $7.4 billion Trans Mountain pipeline project is the just the latest example of business investment collapsing in Canada. We are now four years into plummeting investment in Canada’s energy sector, while the same industry is booming in the United States. Now our federal government wants to “study” why. It’s pretty simple: when a country or jurisdiction fails to offer a competitive investment environment or when the rules and policies are uncertain and unstable, business owners, entrepreneurs and investors look elsewhere.

Increasingly, Canada is simply not competitive or even hospitable to business investment. Steve Williams, president and CEO of Suncor, one of the planet’s largest energy companies, recently said that his company was pulling back investment in Canada because we’re not competitive enough, and made note of our challenging regulatory environment. David McKay, president and CEO of Royal Bank, one of the country’s largest banks, recently urged Ottawa to act to stem the outflow of capital, which he described as leaving the country in “real time.”

These business leaders were in part responding to a number of high-profile projects that have been either cancelled or not approved by government, including Petronas’s $36-billion LNG project in British Columbia, TransCanada’s $15.7-billion Energy East project, and the most recent suspension of non-essential spending on Kinder Morgan’s $7.4-billion Trans Mountain pipeline, to name but a few.

And unfortunately, investment data bears out these anecdotes. Since peaking in the fourth quarter of 2014, total business investment—excluding residential housing and adjusted for inflation—is down almost 17 per cent. Private-sector investment in factories and other structures is down 23.3 per cent. And investment in intellectual property is down 13.3 per cent.

A 2017 study by Philip Cross, former chief analyst at Statistics Canada, ranked Canada 16th out of 17 countries for business investment between 2015 and 2017 compared to 8th place for the period between 2009 and 2014. And don’t expect things to improve: Statistics Canada’s survey of the investment intentions of private businesses shows further slippage in 2018, which would mark the fourth straight year of decline.

While governments in Alberta, Ontario, Ottawa and now British Columbia may not want to hear this, their policies have made Canada and their particular provinces less competitive and thus less attractive for business owners, entrepreneurs and investors.

Actions by our federal and many provincial governments to increase business and personal taxes, introduce carbon taxes, run budget deficits (which risk future tax increases), and add significantly to the regulatory burden (including labour, carbon and environmental)—as well as ongoing uncertainty over NAFTA negotiations and thus access to the U.S. and Mexican markets, and pronounced anti-business rhetoric from some of our political leaders—have materially harmed the country’s business and investment climate.

More specifically on the energy front, Ottawa is creating a new agency, the Impact Assessment Agency of Canada (IAAC), to review major energy projects. The agency will inject significant subjective criteria into project analysis including “social” impact, gender implications, and potential climate effects that will mean a continued politicized process that takes an unreasonable amount of time to complete.

Making matters worse, as Canada takes backward steps in terms of our attractiveness to business owners, entrepreneurs and investors, the U.S. has leaped forward with sweeping tax reforms and large-scale reductions in business regulations.

The unfortunate reality is that Canada has become a more expensive, less hospitable place to do business while the United States has become more business-friendly. So it shouldn’t be surprising that the U.S. is enjoying a surge in investment (and all the benefits that it provides) while Canada suffers from a collapse in investment.

Perhaps an upside of the disappointing announcement from Kinder Morgan on the Trans Mountain pipeline is that it will focus the attention of Canadians on our dismal and declining competitiveness and investment performance. Even if the already-approved Kinder Morgan project moves ahead, Canada has an uphill climb to reform its investment climate.