Opinion: It’s tempting for the Canadian government to play nice with Donald Trump’s America. But that approach is morally bankrupt—and likely to backfire 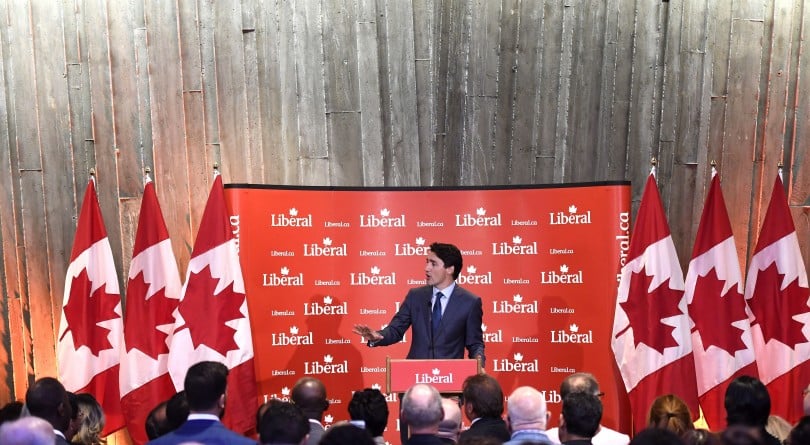 For a leader whose political career has been marked by the criticism that he’s merely a haircut who was born on third base, the perception of Justin Trudeau as a serious, tough-nosed customer enjoyed a boost in recent weeks. All it took was a couple of tough words over a trade dispute for our bullying neighbour to the south, whose president spiked a G7 communique, levelled painful tariffs, and tilted the global order like a wobbly pinball machine. There was our Prime Minister, standing up for Canada despite the importance of the relationship with the U.S. to our economy and our politics—and Canadians loved him for it.

Now here we are, days after revelations that Donald Trump’s “zero-tolerance” migrant policy has led to the separation of children from their families and their imprisonment in cages in detention centres lit 24-hours a day by fluorescent light. It’s a practice that the chair of the United Nations Human Rights Council called “unconscionable” and “nothing short of torture.” The President has refused to change the policy despite public pressure as more and more people see the harrowing images emerging from the detention facilities and hear the audio of children wailing. And here is the same Prime Minister, unleashing a mealy-mouthed blast of mad-libs about not “playing politics” with the “extremely difficult situation.”

Suddenly, just when we needed moral leadership the most, the Prime Minister went from “We won’t be pushed around” to a cringe-inducing hedge: “I have been very clear on the role that Canadians expect of me—to stand up firmly and unequivocally for our values, for our interests, to protect Canadians and to make sure that we’re doing well, as well as having a constructive relationship with the United States.”

How can the government claim to be standing up “unequivocally for our values” while nearly 2,000 vulnerable children have been rounded up and caged in detention centres by our closest neighbour and ally? Are we to believe that imprisoning children, many under four years old, is consistent with the values that define Canada? If so, what does that say about us?

It doesn’t help that Trudeau has deployed that age-old dodge, the ancient tactic of saying “I’m not going to play politics with this intensely political issue”—one that’s as duplicitous as it is irresponsible. Never mind that the Prime Minister’s job is most certainly to “play politics”; the sleight of hand is more offensive than that. If politics is about deciding how we want to live together and how we’re going to get there, pretending that a non-decision isn’t political is, on the face of things, an abdication of leadership and of the whole point of democracy in the first place.

But of course, there could be more going on here. The Liberal government is stuck in tough negotiations with the U.S. administration to save the North American Free Trade Agreement. More broadly, they are having a tough time managing the president’s mercurial attitude towards trade, especially in light of recent tariffs on Canadian imports. There’s also the adjacent matter of how the two share the world’s longest undefended border, one that a great number of goods, services, and people cross every day.

There’s also the fact that the Canadian government is skittish when it comes to our own migrant policy. Last year, after Trump instituted a ban on travel from certain Muslim majority countries, the Prime Minister tweeted: “To those fleeing persecution, terror & war, Canadians will welcome you, regardless of your faith.” The government then spent months unraveling the implications of that blow of the “Canada is back!” horn while failing to live up in substance to the feel-goodery of the style.

READ MORE: Pharmaceuticals could be the prescription for truly hurting America

In this case, claiming not to be playing politics is intensely political. Given the inhumane nature of Trump’s migrant policy, and suggesting that we’d only oppose something against our values, our approach is also morally bankrupt. And to make matters worse, it’s also likely to backfire, since Trump has proven impossible to appease. We’ve chosen the worst of all worlds.

In his 1961 inaugural address, John F. Kennedy warned, in a different context, that “those who foolishly sought power by riding the back of the tiger, ended up inside.” More than 50 years later, here is Canada—beacon of hope, moral exemplar to the world, shiny liberal Valhalla—mounted squarely on the raging cat, trying to manage a relationship with an addled and unpredictable authoritarian south of the border while human rights abuses occur right in front of our faces.

There are countless grim moments throughout human history that we subject our after-the-fact moral certainty and judgment upon today, adding for good measure that “We would never have let that happen.” We’re better than our barbarous forebears, naturally. We’ve learned our lessons. We’re cosmopolitan. Forward-thinking. Smarter. Kinder. Better.

And yet today, we are silently staring down a morally outrageous and unacceptable policy, hedging toward protecting our “interests” on the backs of helpless children and their terrified families while the American president echoes poet W.H. Auden’s Epitaph on a Tyrant: “When he laughed, respected senators burst with laughter/And when he cried the little children died in the streets.”

Like it or not, we’re living history right now. We’re in the midst of a moment that future generations will look back and judge us on, scrutinizing what we did or didn’t do at the pivotal moment when our moral mettle was put to the test. If we fail to do the right thing—to call out abuses, to demand better, to require decency as a basic term of doing business—then we will rightly be condemned just as we condemn our own antecedents for their failures.

There’s still time for Canada to do the right thing. There’s still time for us to criticize human rights abuses abroad and then to turn our gaze back on ourselves and our shortcomings at home. Today, standing up for human rights is not only the right thing to do, but the necessary thing to do if we wish for a future in which a stable, just, and inclusive democracy is possible.