Scott Gilmore: Still fighting for his border wall, the president droned through an unconvincing speech. Like his presidency, it didn't accomplish much. 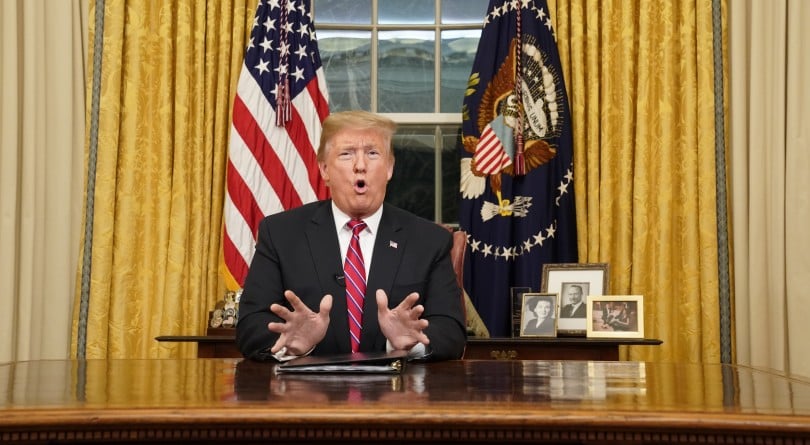 Trump speaks in his first prime-time address from the Oval Office in an effort to build support for $5.7 billion in funding for a border wall (Sandy Huffaker/Getty Images)

Tonight the President of the United States addressed the nation from the Oval Office, asking for money to build a wall, while his former mistress broadcast her own live address from her bedroom, folding her laundry in her underwear. The year of our lord 2019 is turning out as well as we should have expected.

After two years in office, President Trump has very little to show his base other than a substantive tax cut for the rich and two Supreme Court justices.

Coal mines continue to close, at the fastest rate in a decade. The stock market ended down for the year. The Mueller investigation (one of 17) is racking up indictments and prison sentences. The Democrats now control the House of Representatives and are drafting subpoenas. NATO still exists. Obamacare limps on. NAFTA is being replaced by an almost identical trade deal. Muslims remain unbanned. The Dreamers have not been deported. As one supporter eloquently and unabashedly complained today in the New York Times: Trump is just “not hurting the people he needs to be hurting.”

In this context, it makes sense that the president should still be fighting for his wall. He has given up on getting Mexico to pay for it. And he is willing to settle for “beautiful steel” instead of “beautiful concrete.” But if he could at least point to something solid he could call it a win. Trump is famous for declaring every rout a victory, but it’s hard to tell your supporters you built a glorious wall along the Mexican border when there is quite clearly no wall along the Mexican border.

So, after continually failing to convince Republican legislators to give him what he wants, Trump thought he could out-smart the newly arrived Democrats by refusing to sign their (wall-less) spending bill. He expected that the pain of a government shutdown would be too much for them to bear, the public outrage too intense for them to endure.

READ MORE: The terrifying depths of Donald Trump’s ignorance, in a single quote

But as the shutdown is about to become the longest in American history, polls show the president is being blamed, which makes the Democrats quite happy to out-wait him.

Therefore the president opted to go over the heads of his advisors, his erstwhile Republican allies in Congress, his critics in the media, and make his case directly to the American people using the same medium that made him famous: prime time network TV.

But strangely, the result looked more like a bad audition tape than riveting reality TV. The president sat stiffly at his desk, droning through a carefully prepared speech that was clearly wordsmithed by more cautious and less shameless staff. He only came to life when he got to the parts about grisly hammer murders.

The president did not announce that he was sending the army to build the wall. He did not offer the Democrats any concessions. He did not present any new arguments. He simply restated his (evidently unconvincing) case. His tweets are more substantive and newsworthy than this address.

Perhaps Trump just wanted to see if the networks would agree to air it—so he could revel in the fact that the “fake news” had to broadcast his speech whether they liked it or not. Or possibly he had planned (as was rumoured) to declare a national emergency, but was talked out of it at the last minute. Maybe Sean Hannity told him it would make him look powerful and presidential. We won’t know until the next Bob Woodward book.

Regardless, the address was made. The president argued for his wall. The Democrats immediately responded with a “no.” His Republican allies did not rally to his banner. The government remains shutdown. But Stormy Daniels did manage to fold all of her laundry tonight. So at least we have that.