One picture, nearly 1,000 words: Trump and Putin shake on it 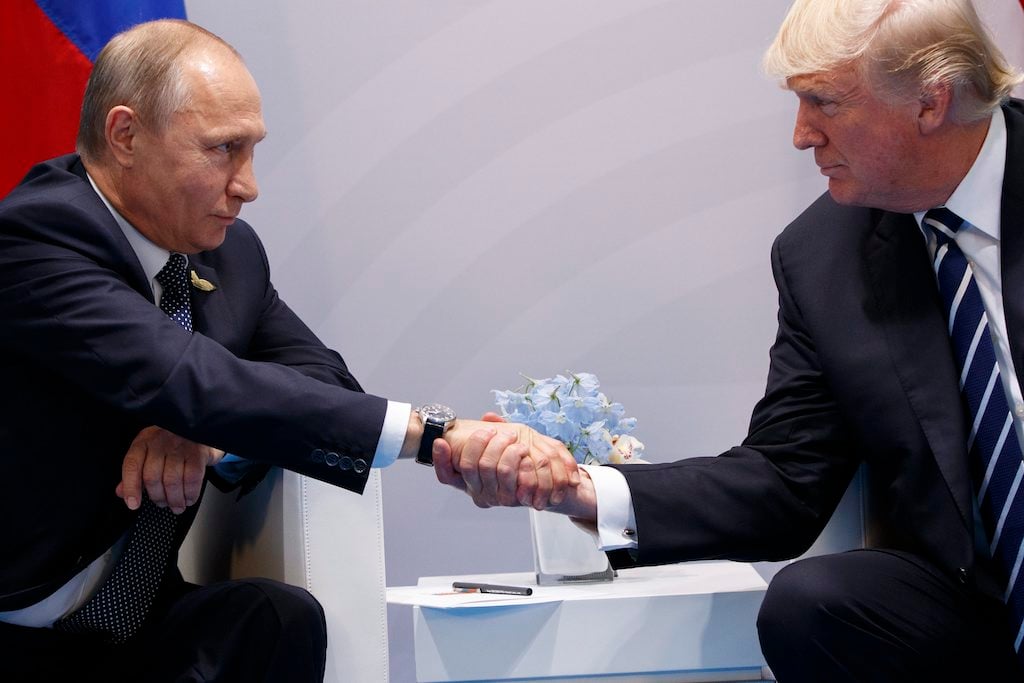 Fewer than 48 hours after photographers from all over the globe snapped a shot of the ceremonial handshake between U.S. President Donald Trump and Russian President Vladimir Putin at the G20 summit, another possible connection between the men was reported. The New York Times revealed Sunday that Trump’s son, Donald Trump Jr.—as well as his son in law, Jared Kushner, and former campaign chair, Paul Manafort—took a meeting last year with a Russian lawyer under the pretext that, apparently, she might have some information on Hillary Clinton.

Far from denying outright that this was the reason behind the meeting, Trump Jr.’s statement appeared to confirm it. “I was asked to have a meeting by an acquaintance I knew from the 2013 Miss Universe pageant with an individual who I was told might have information helpful to the campaign,” Donald Trump Jr.’s statement read. According to Trump Jr., the woman “stated that she had information that individuals connected to Russia were funding the Democratic National Committee and supporting Ms. Clinton. Her statements were vague, ambiguous and made no sense… It quickly became clear that she had no meaningful information.”

The legalities surrounding that meeting have yet to be worked out. Some, like Richard Painter, the former chief ethics lawyer for the George W. Bush administration, suspect that, if the story is accurate, “this borders on treason.” Trump, true to his nature, took to Twitter Monday to deflect.

It has indeed, for many Americans and their global friends, been a shocking six months since Trump entered the White House. The endless headlines about Trump’s personal or peripheral ties to various Russian players have become so constant as to be almost mundane. As have his personal comments and interventions on social media: his tweet proclamation upon arriving in Europe that “everyone here is talking about why John Podesta refused to give the DNC server to the FBI and the CIA” is hilarious nonsense to anyone paying attention. And that Trump refuted his statement that he and Putin had agreed to form “an impenetrable Cyber Security unit,” less than a day after he’d originally made it (“The fact that President Putin and I discussed a Cyber Security unit doesn’t mean I think it can happen,” he tweeted) is merely par for the course at this point. For all those who did not vote for him, or who stare in wonder from overseas, he is a baffling punchline.

MORE: Why we should pay attention to Trump’s Facebook timeline

The hype that had been created in the days leading up to the Putin-Trump handshake was inevitable, but it masked a particular gloom, and perhaps presaged further to come. If it is true, as has been written elsewhere in this magazine, that the U.S. no longer matters, then surely this moment when Trump clasped Putin’s hand and looked him in the eye with assurance and declared the meeting an “honour”—Putin, who has for years stood as antithesis to liberal democratic values—should be looked upon with some considerable sadness.

Two months ago, the U.S. Advisory Commission on Public Diplomacy released a report called “Can public diplomacy survive the internet?” It’s a good question. And, given meddling during the 2016 election, the answer might not be “no,” but it might be: “not yet.” In that report, Markos Kounalakis—a former journalist and current visiting fellow at the Hoover Institution at Stanford University—noted the change in global approach to the United States.

“There was a time when regardless of American foibles—self-serving government interventions or, even, assassination plots—citizens in developed and developing nations looked to the United States as a land of equality, political freedom and economic promise,” Kounalakis wrote. “They were willing, if not eager, to forgive American mistakes as temporary deviations from what was otherwise a noble and promising vision of the world.”

Now? “The world can no longer buy the mystique.”

Maybe it’s been some time since anyone truly did. But behind America’s long history of foreign and domestic mistakes has always been, at the very least, the Enlightenment ideals on which it was founded—the ones that have, gradually and often painfully, bent the long arm of its history toward progress. Even if you hated the president, you might still believe that the idea of America as an imperfect but worthwhile model for democracy could survive. You could believe that America fights tyrants—that it doesn’t befriend them.

This is what is perhaps so jarring about the moment captured Friday in Hamburg. Across the globe, as well as within the U.S., there was a difference between America and Russia. They were not on a level field, not of the same ilk. What comes across in the photo of Trump and Putin shaking hands is the symmetry it both creates and reveals. Trump and Putin don’t look identical. But they look like equals.