Trump and the virus: duelling amoralities

Paul Wells: Remember, the virus now battling for control over Donald Trump's body does not care what Donald Trump has done. These are dangerous times. 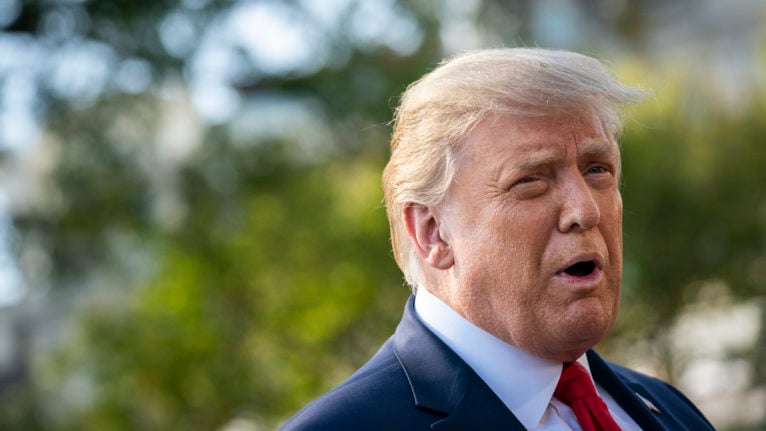 Trump speaks to reporters on his way to Marine One on the South Lawn of the White House on Sept. 30, 2020 (Drew Angerer/Getty Images)

Thoughts and prayers. “Our thoughts and prayers are with the President and the First Lady as they deal with the coronavirus,” U.S. Chamber of Commerce CEO Thomas J. Donohue said in a statement following the terrible news. “We wish them a speedy recovery and have the utmost confidence in the talented medical professionals caring for them.”

Then things got a bit weird, as though Donohue, a man of formidable clout in Washington, had a required word count and was struggling to reach it. “This virus has taken too many Americans, and the United States will defeat it by leveraging innovation and cutting-edge medical therapies, and by uniting as a nation as we have so many times before.”

If I may, one reason this virus has taken too many Americans is that too many men of formidable clout have been telling them to wait for innovation and cutting-edge medical therapies. In fact the smart money has always been on keeping your distance, washing your hands and holding your fingers well clear of your face. Shortly after the current nightmare began, the smart money adjusted to evidence, as smart money should, and added the habitual use of simple facemasks to the list of reliable prophylaxes.

As for “uniting as a nation,” I assume Thomas J. Donohue has spent some time in the United States so I won’t do him the indignity of pretending he meant that part seriously.

The President of the United States and his wife are sick with a virus that barely harms many who get it, kills too many of the rest, and wreaks durable havoc on too many bodies and minds between those extremes. Of course I wish the Trumps a speedy recovery. Donald Trump has been a terrible president, probably the worst since Andrew Johnson. He revels in the traits that make him bad for his country, practices them, hones his corrosive skills. But I’m not in the habit of wishing people health commensurate with their job performance, and it’s when it’s easiest to rise above the standards set by others that we should remind ourselves that it’s also an available option. So this corner adds its best wishes to all those being sent to the president and first lady from every corner of the world, because that’s exactly how this grace thing works.

Readers needing more pragmatic reasons for hoping the Trumps will be well should remember the virus is still contagious and could yet spread to White House staffers. Many of them are innocent of anything except needing gainful employment. Others have yet to write their exculpatory memoirs insisting they knew all along that the boss never deserved their labour and defence. Also this: if the president were ever incapacitated, we would be reminded soon enough that there are hundreds behind him who share his values and goals. Most of them watch less TV and are probably more productive. Always be careful what you wish for.

It is also worth remembering that the virus does not care whom it infects. It offered no judgment of the human worth of Boris Johnson or Sophie Trudeau or Tom Hanks or Ellis Marsalis when they got sick. A virus is not even alive, as science usually understands the term. It’s a sheath of protein encoding a sliver of genetic material that subverts the machinery of its host, forcing a human body to generate endless copies of the original virus. It usually sets up shop in your lungs because your lungs are moist, but if it finds congenial conditions in your brain or your nervous system it will settle in there too. It doesn’t even know where it is doing its sullen reproductive trick. It is a tiny stupid machine, a kind of pun.

So the colony of novel coronaviruses currently battling for control over Donald Trump’s body—a battle we all must hope the wee vandals lose—is blissfully unaware that its latest host first appeared on the front page of the New York Times in 1973 because the Justice Department believed he and his father were denying 14,000 apartments to prospective Black tenants on the basis of their race. (The Trumps countersued, and consented to judicial oversight of their rental practices for years afterward in return for a settlement that included no assertion of guilt. Not that the virus has read that far into the story.) The virus doesn’t know it is assaulting the body of a man who was impeached for peddling the nation’s favour in return for electoral help from a newly-elected and easily-bullied president in a distant land.

The virus has no opinion on whether there were some very fine people on both sides.  The virus is not asking the Proud Boys to stand down and stand by. The virus doesn’t find Kim Jong Un’s letters beautiful. The virus would kill Joe Biden if it could, or you or me, and neither would it care if it failed. It does not envy, it does not boast, it is not proud. It hooks onto living cells and makes them crank out more viruses. Everything that made it dangerous in March makes it dangerous today. So 2020 is turning into a bad year for people with short attention spans. Keep washing your hands, and may God continue to bless the United States of America.