Trump may still be winning

Scott Gilmore: The fatal flaw in election models is that they assume a free and fair election 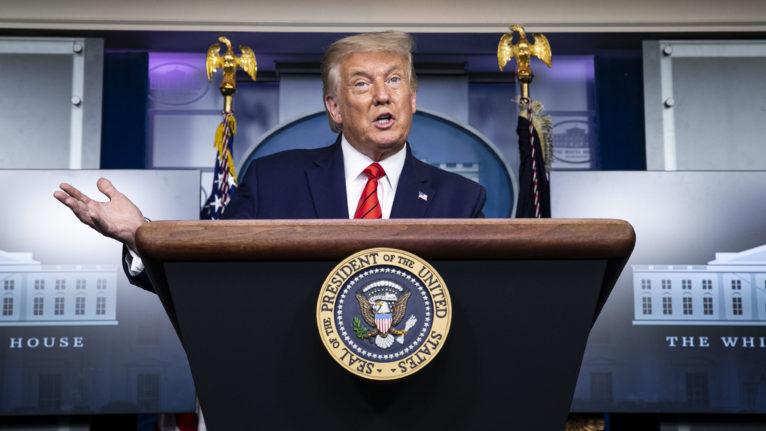 Donald Trump speaks during a news conference at the White House in Washington D.C., on Aug. 31, 2020. (Al Drago/Bloomberg via Getty Images)

Both the New York Times and the polling aggregator FiveThirtyEight currently calculate that the odds Donald Trump will be re-elected President of the United States are 3 in 10. These and other election models have an intrinsic flaw which means they significantly underestimate the likelihood Trump will win: They all assume a free and fair election. It is already clear this is not happening.

The President, the Republican Party, and his supporters are energetically tipping the scales in Trump’s favour several different ways. One example that has received a lot of media attention is his effort to slow down the mail. Trump has openly admitted that by blocking funding he hopes to prevent the Post Office from being able to manage the expected surge of mail-in votes. This significantly disadvantages the Biden campaign as Democrats are twice as likely to vote by mail than Republicans.

Similarly, Trump and the Republican-held Senate have refused to provide election administrators with the additional funds they have requested in order to ensure voting machines cannot be manipulated and to protect voters, volunteers and the counting process itself. Meanwhile, Politico revealed on Tuesday that the Department of Homeland Security is spending $250 million on a communications campaign to alleviate voter concerns about the coronavirus pandemic — the issue doing the most damage to Trump in the polls.

Then, of course, there is the foreign interference. A bipartisan Senate report released in August provides yet more confirmation that Russian intelligence interfered in the 2016 election, and that the Trump campaign welcomed that support. Recently, the office of the President’s own Director of National Intelligence also warned that Russia is repeating those efforts and is once again working to influence the election in Trump’s favour, using “covert and overt influence measures,” including social media campaigns and the planting of fake stories, to increase discord and sway voters.

READ: The unmasking of Donald Trump

This is all in addition to the unprecedented Republican use of lying as a fundamental part of their strategy. Historians and political observers have already called Trump the most dishonest President in history — Washington Post fact checkers have recorded over 20,000 lies since inauguration day. But the falsehoods have become even more frequent and brazen in this election. In Trump’s address at the Republican National Convention almost every accusation against Biden was either entirely false or highly misleading. And his campaign is adopting the same tactic. Just in the last two days his team published three different videos which had been doctored. You have to go back to Stalin for similar examples of such shameless use of falsified propaganda.

Meanwhile, the American media is utterly failing to inform voters of the truth. Consider, for example, the fact that Donald Trump has continually claimed he was responsible for the Veteran’s Choice Act, which was signed into law two years before he was elected. According to a count by CNN’s Daniel Dale, Trump lied about this over 150 times before a member of the White House Press Corps finally called him on it. The President simply ignored the question, and three weeks later no journalist has bothered to follow up. After Trump’s lie-riddled RNC speech, the Washington Post ran a front-page story describing the attacks against Biden. You had to find another less prominent article to learn that most of those criticisms were false. Part of the problem is that Trump lies so frequently it is almost impossible for the press to refute every false claim before he has moved on to the next one.

READ: The look on Donald Trump’s face when he’s been proven wrong

Trump’s constant and direct attacks on the election itself make a fair vote all but impossible. He has repeatedly accused the Democrats and the “deep state” of cheating and he has claimed the only way he can lose is if the vote is rigged. This not only reduces turnout (which hurts the Democrats more than him) it makes it less likely any disputed results can be resolved in an orderly fashion. And Trump is preparing for this chaos. The Republican National Committee has doubled its legal budget this year with the intention of filing lawsuits on election night to challenge close local results.

One of the peculiarities of the American electoral system is that it does not have a mechanism to resolve a situation where both sides claim victory. In a recent bipartisan war game exercise held at Georgetown School of Law, conducted by 67 former party and government officials and dubbed the “Transition Integrity Project,” the Trump team took advantage of that and the fact that Democrat voters are more likely to use mail-in ballots which are often counted last. In that scenario, Trump declared victory early on election night, used state Republican officials to force counting to stop, as they did successfully in Florida in the Bush vs Gore election of 2000, and then had the Republican-led state legislatures certify the early returns. The result was Trump was re-elected in spite of actually losing the mock election.

Prominent election models like FiveThirtyEight do not take into account any of these facts. They do not consider the possibility that millions of mail-in ballots will never be counted, or the incumbent will simply declare victory, or that state legislators will step in to prevent a Democratic win. Right now the RealClearPolitics poll of polls gives Biden less than a three per cent lead in battleground states. That is is not nearly enough to overcome all the various ways Republicans are attempting to rig the election. In fact, the scales have been tipped so far in Trump’s favour, a margin that slim may mean he is already winning.

Perhaps this is why, on RealClearPolitics’ rolling average of betting markets, Trump’s odds of winning have sharply improved over the last few months to the point that he is now neck and neck with Biden. Although these forecasts are derided by pollsters and election modellers, participants in these markets have one significant advantage — they see the election for what it is, not what it was supposed to be.