Trump surrenders, declares it a victory, and goes home

Scott Gilmore: The Afghanistan 'peace deal' will see America cut and run. It is the least worst option for the U.S.—and a troubling end for Afghans 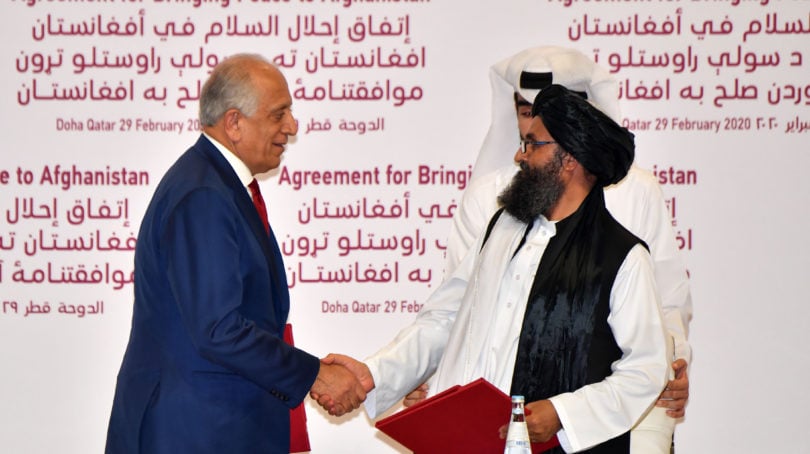 There is a peace deal to end the war in Afghanistan. Or, at least, there is something that is being widely described as a peace deal. On closer inspection, that may be stretching the truth a little.

Over the weekend, the United States and the Taliban signed an agreement in Doha that President Donald Trump claimed would bring home the 12,000 American soldiers still stationed in Afghanistan. The broad strokes of the deal are that the Taliban will honour a cease fire, promise to not support al-Qaeda, and release 1,000 Afghan prisoners. In return, the U.S. promises 5,000 prisoners will be released, they will withdraw all western troops, lift sanctions and provide economic support to a new Afghan government that includes the Taliban.

The current Afghan government, however, has responded with a “Say what now?” President Ashraf Ghani was just re-elected in the country’s fourth peaceful democratic election, and he is not entirely happy about the idea of sharing power with the people who have been trying very hard to kill him. And by “not entirely happy” I mean he is very much opposed to it. He has also said that the Afghan government has no intention of releasing 5,000 Taliban prisoners, regardless of what the Americans may have promised on their behalf.

Which is a rather important point—this Afghanistan peace deal was negotiated without the Afghans. The U.S. government and the Taliban were the only parties at the table, which in hindsight does seem to be a problem, especially when you consider the Taliban have already called off the cease-fire.

READ MORE: Canada utterly failed in Afghanistan. Why can’t we say this out loud?

Regardless of what the Taliban or the Afghan government do next, however, it is very likely that the Americans will pretend the deal is being honoured and will go home, thus ending the longest war in American history—or more accurately, ending American participation in the longest war in their history. The war itself will quite possibly go on without them.

And he is cutting it—and running. Any deal that involves one party withdrawing and then paying economic support is less a peace treaty and more a surrender. It would be easy and tempting to deride Trump for this capitulation, but no one believes better terms were possible.

In fact, arguably this deal has been the best-case scenario since 2008. But no one wanted to admit it, and the Obama administration did not want to be seen as the one that lost the war in Afghanistan. Trump’s genius is that he understood all he needed to do was to call the loss a great victory and then go home.

This deal is, without a doubt, the least worst option for the U.S. The alternatives would be another decade or two of conflict, billions more spent, and no expectations that the sacrifices would ultimately bear any better fruit.

However, for Afghans, the deal is not great. The Ghani administration is not a strong one, the Afghan government is wobbly at best, and the economy is piled under 40 years of bombed out rubble. If they are lucky, a power-sharing deal is reached with the Taliban that either carves the country into warlord fiefdoms or leads to a much more repressive and authoritarian government than what is there now. If they aren’t, more civil war.

And, back here, in Canada, we have yet to ask—let alone answer—the question: Was it worth it? It was our largest military deployment since Korea and our largest aid package ever. One hundred and fifty-eight Canadians were killed as we sought to defeat the Taliban with one hand and “nation build” with the other. And, in the end it led to what? Good was done. There is no doubt. Vaccinations were administered. Schools were built. Allies were supported. But, the question remains—was it worth the cost? I don’t know.