Trump wins, but not enough for Trudeau to lose

Andrew MacDougall: Trump needed a win even when the U.S. wasn’t losing. And now he has it. Trudeau, meanwhile, can walk away with his fist raised. 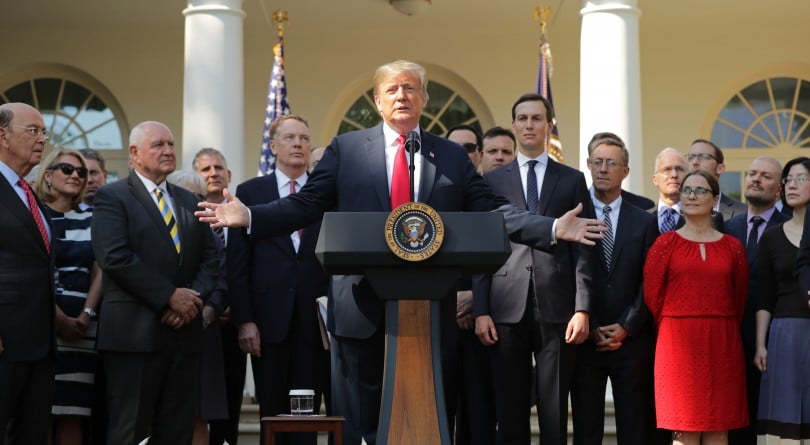 U.S. President Donald Trump speaks during a press conference to discuss a revised U.S. trade agreement with Mexico and Canada in the Rose Garden of the White House on Oct. 1, 2018 in Washington, DC. (Photo by Chip Somodevilla/Getty Images)

Being a jerk works.

Welcome to the message Donald Trump will be shouting from the rooftops following his triumph over Justin Trudeau and Mexican President Enrique Peña Nieto in the recently-completed NAFTA renegotiations.

And if you think “triumph” is too strong a word for what Trump managed to accomplish with the new USMCA agreement (what, was Trumpta taken?), you clearly haven’t met this president. Or seen the lengths to which he’ll go to get a win, even if it means punching what should be his best friends in the face to get it.

Trump, in his own mind anyway, has just fixed the “worst trade deal in history.” The very worst. Like, the worst. Of all time. It doesn’t matter that he did it by fiddling on the margins, and that the end result looks suspiciously like the original deal, or that he angered two key allies in doing it. At the end of the day, there are pictures of him signing a document, and to most Trump supporters that’s the smell of napalm in the morning. To them, that’s presidenting.

Of course, the “fake news” media will probably tell a different story, but since when has that ever made a difference in #MAGA-land? Then again, Trump did manage to squeeze out just enough to be able to credibly call it a win, to the point where the U.S. press might even call it one, too.

Were I Sarah Sanders, I would be sending the whiny Dairy Farmers of Canada statement to every media contact in my list. When the dairy guys are squealing like you trod on their teats about the “dramatic impact” the deal will have on their sector, you know you’ve done an honest day’s work. And scored a big win against Canada’s sacred cows.

It doesn’t matter that Trudeau’s concessions were fairly minimal next to the gross perversity that is supply management, or that the newish Class 7 dairy pricing system wasn’t known by any voter not living on a dairy farm. Trump can say he got Trudeau to budge on milk—and, for once, not be lying. And he can say he didn’t even have to remove his specious tariffs on steel and aluminum to do it! So. Much. Winning.

But cheap milk—to say nothing of more expensive steel and aluminum inputs—wasn’t ever the point for Trump.

No, with Mueller circling and Kavanaugh circling the bowl, Trump needed a victory ahead of the upcoming midterm elections; his entire #MAGA schtick is predicated on winning. Trump needed a win even when the United States wasn’t really losing, as was the case with Canada, if not Mexico. And Trump now has it. NAFTA is dead, long live USMCA.

Trump can now take USMCA and hold it up next to the revamped (i.e. barely fiddled with) U.-.South Korea trade agreement, the concessions wrought from those weenies in the European Union, and his tariffs on China, and tell his supporters that America is once again being put first. Put simply, it will be: America, f–k yeah!

At every rally—from here until midterm election day—Trump will clamber up those stairs to the stage, clad in his Make America Great Again hat, to tell his people how their big, brute man of a president wiped the floor with that Pretty Boy Justin Trudeau and anyone else who stood in his way.

And with the American economy booming, the stock market climbing and unemployment low, Trump will have a fairly convincing message on why voters shouldn’t change horses come November. More importantly, it’s a message more moderate Republicans can get behind, at least enough to get them to the ballot box on voting day, where turnout in the midterms is usually low.

But just because Trump is winning doesn’t mean that Trudeau has lost. When your big brother decides to shake you down for lunch money there’s really nothing you can do. So much of the relationship between Canada and the U.S. relies on goodwill, as the thickening of the border post-9/11 and the more recent spat over illegal border crossings shows.

As much as everyone might say they want a Love Actually moment in which Trudeau tells the ignorant and arrogant Trump to get stuffed, it’s not in the country’s best interests, something Trudeau and the rest of his Cabinet recognize. They fought the good fight, protected the reddest of red lines, and lived to fight another day. That’s what winning looks like in these days of the errant colossus.

Andrew Scheer will certainly have a tough time making any of it stick to Trudeau. Sure, the government probably didn’t need to lead with its chin (a.k.a. all the ‘new’ chapters Trudeau mentioned on Day One that were never mentioned again), or taunt Trump along the way, but in the end these are minor criticisms when the deal ultimately held together. Whether or not it was every really in doubt is an entirely separate—and unknowable—question.

And so Trudeau can walk away with his fists raised in the air too. Because you know what also works politically? Standing up to a jerk, something Trudeau will tell to everyone who will listen.