Try to remember that this is your child's Watergate

Tabatha Southey: Michael Cohen's testimony at Congress ruined childhood rhymes and taunts, and caused children to be utterly befuddled by all these important adults 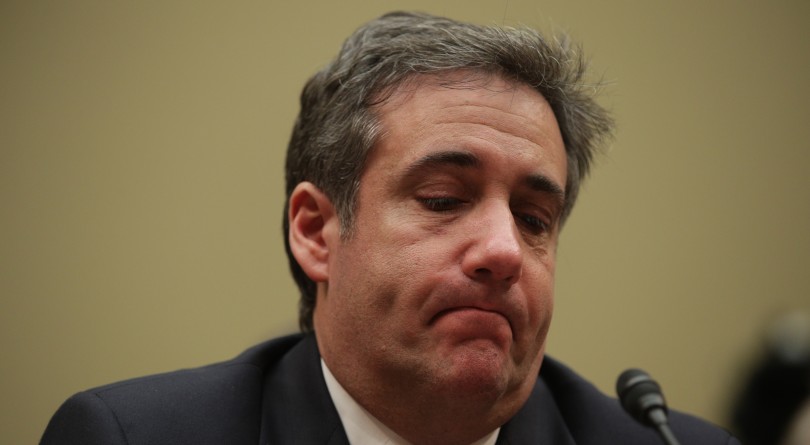 As a child I thought “Watergate” had something to do with a dam, and I was happy the adults around me, above me, were finally starting to share my interests. Eventually, some kind soul informed me that Watergate was a hotel, and so I spent much of 1974 trying to think up a way to convince my parents to take the family to stay at the hotel that some architectural visionary had built on top of a hydroelectric project, a wonder that no one could stop talking about.

Ultimately, I may be the person most disillusioned by Watergate.

Small me had questions about Watergate. What were the swimming options? Was this “Bob Haldeman” guy OK? Did Bob still use water wings? What did the president know and when did he know it? And if he knew where I could see otters, would he tell me?

Watching Michael Cohen, President Donald Trump’s one-time personal lawyer and “fixer,” testify before the House Committee on Oversight and Reform on Wednesday, I wondered what impression the young TV and dinner conversation over-hearers of today are being left with. What phrases will enter their lexicon? What questions will knee-high evesdroppers have this time?

Mr. Cohen, who on Aug. 21, 2018 pleaded guilty to eight charges, including tax fraud, bank fraud and campaign finance violations, began his testimony by reading a statement that included the words, “I know what Mr. Trump is. He is a racist, he is a con man, and he is a cheat.” I do hope Mr. Cohen is able to achieve his dream of attaining the rank of Captain Obvious before he goes to prison.

He once asked me if I could name a country run by a black person that wasn’t a ‘shithole.’ This was when Barack Obama was president of the United States.”

I’m pretty sure seven-year-olds turned to their dads on Thursday morning and said, “I mean, obviously, I understand that different countries face different economic challenges, and many are struggling with the scars of colonialism and now climate change, everyone knows that, but am I allowed to say ‘shithole’ like the sad lawyer on TV?”

Some parts of the hearings were not appropriate for younger audiences. Many parents would have appreciated a content advisory before Clay Higgins’s allotted five minutes of self-immolation. It would certainly have saved mothers and fathers many hours of trying to comfort their crying children and reassure them that, “No, baby, everything will be OK, of course the people running the United States know how boxes work.”

For those who missed his performance, Mr. Higgins, the Louisiana representative—doing his best Perry Mason of Packaging—demanded that Mr. Cohen tell him why the box in which Mr. Cohen had found a copy of a $35,000 cheque from Mr. Trump (we’ll get back to this) had not been “turned over to investigative authorities during the many criminal investigations you’ve been subject to?”

Mr. Cohen (who, you must remember, has spent more than a decade professionally explaining things to Donald Trump) was unable to communicate to the congressman the simple idea that “investigative authorities” had seized the boxes, looked through the boxes, and then returned the boxes to Mr. Cohen.

Everyone watching, including children, was subjected to the haunting sight of the dumbfounded Higgins, not to be confused for Rep. My Question Is More of a Comment (R-Tex.), struggling with the concept that when FBI agents seize boxes, they don’t eat them.

There, for all the world to see, in the longest five minutes ever clocked, was Mr. Higgins—clearly convinced he was about to turn the whole hearing around on Cohen and the Democrats—triumphantly making it clear that he does not have the slightest understanding of “containers,” “offices” or “returning things.”

Parents paid the price for this that night. “You just get one child calmed down and then the other will pipe up with, ‘But how was he ever elected? And you say, ‘Well, honey, people checked a box that had been given to them and then they gave it back,’ and then it’s tears again,” mothers complained at drop-off the next morning.

To Rep. Higgins’s credit, his “boxes, how do they work?” gambit was a step up from broader Republican strategy of expressing incredulity that the president would ever employ a criminal to do crimes, as opposed to the usual strategy of of entrusting your lawbreaking to a team of Girl Scouts lead by the Archangel Gabriel. “You have just pleaded guilty to lying to Congress to protect the president. How can you expect us to believe you when you come and claim you lied to Congress to protect the president?” Republican speakers repeatedly demanded to know.

I fear this week’s events have ruined “Liar, liar, pants on fire.” After all, if things stop being cool the second your dad starts trying to get in on them, what happens to a beloved childhood taunt when a Republican congressman has it printed up poster-size in an excruciatingly awkward attempt at damage control?

There was no need to actually pay to have “Yes, this is all we’ve got” printed on the back of the sign; single-sided printing got the message across loud and clear.

READ MORE: Will America recover from Donald Trump and the Reign of Lies?

From now on when a child yells “Liar, liar, pants on fire,” the “liar” will respond, “It’s that sort of behaviour that I’m responsible for. I’m responsible for your silliness because I did the same thing that you’re doing now for 10 years. I protected Mr. Trump for 10 years,” and the taunter will be officially owned.

Those were Mr. Cohen’s exact words this Wednesday, and they will become the new “I’m rubber, you’re glue, everything you say bounces off me and sticks to you,” thereby ruining two perfectly decent childhood rhymes.

Take a moment to talk to your children and to listen. Find out if they have any questions; this weeks testimony was likely a transformative experience for many of them. While any adult can tell you your first sexual experience is usually pretty unmemorable, you never forget your first dumb lawyer.

In the eyes of a child, “lawyers” are those wonderfully important and impressive figures at the centre of every half-understood courtroom drama who save the day just by dramatically rising from their chairs. Like “astronauts” and “firefighters,” “lawyers” are less people than they are aspirations in suits. This week, a lot of children lost that innocence. The “lawyers are smart grown-ups” veil was lifted, and when that happens you never see the world quite the same way again.

When you’re spending time with your kids this week, be aware that they might have heard Mr. Cohen say, “Mr. Trump had frequently told me and others that his son Don Jr. had the worst judgment of anyone in the world. And also, that Don Jr. would never set up any meeting of any significance alone.” Understandably this may cause anxiety in children.

Make sure they know that you love them, would not denigrate them before your employees or co-workers, not even the ones you trust to commit adult-film-star-related campaign finance violations for you. Say something like, “Of course I trust you to set up a high-profile meeting, and if I ever need someone to liaise with a foreign entity in the hopes of undermining my political rivals and at the expense of our nation’s sovereignty, you’ll be the first little criminal buddy I call, Sport.”

Michael Cohen’s testimony was a teachable moment: if you allow yourself to be seduced by fame and money, you will end up here, on the stand, on your way to prison.

But the story from the stand was also a testament to how far a man will go, should go, to make sure that future generations do not, in the years to come, whatever they may do, confuse and conflate him with Paul Manafort.

Mr. Cohen testified for many hours across several days, but it’s hard to shake the feeling that all he really wanted to say is, “Please, America, Paul Manafort and Michael Cohen are two completely distinct individuals! When you think back to this, I am not the one with the daughters and the text messages. I have never owned an ostrich-leather anything! I just want to make it clear today, to Congress and the American people, that I didn’t even know ostrich leather was a thing until I read about Manafort. I mean, what the hell? It’s a bird!”

You could see the desperation in his eyes—after  all, he is practically a Watergate baby himself—the gnawing fear that one of the children watching at home might one day grow up to be a screenwriter. Mr. not-Manafort  has good reason to fear that in the middle of a rewrite of the inevitable “based on a true story” film of this whole affair, that screenwriter will turn to their co-writer and say, “Look, this is a pretty big cast of crooks, do we really need both Paul and Michael, I think we could go with a composite character thing here and tighten things up a bit.”

Late Thursday night, it was reported that Michael Cohen will be back next week for more testimony before the House Intelligence Committee. So, talk to your children about how to talk about Michael Cohen.