We are all witnessing the Great American Implosion 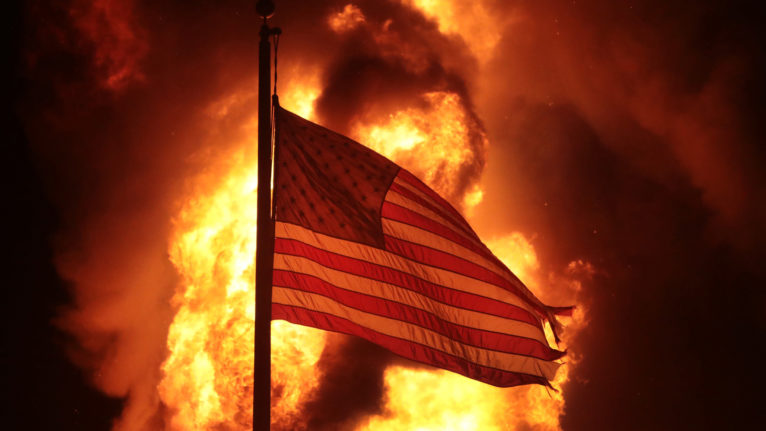 A flag flies outside a burning corrections building during protests and rioting in Kenosha, Wis. (Scott Olson/Getty Images)

I moved to Boston last February. The plan back then, beyond being with my wife as she finished up a post-doctoral fellowship at Harvard University, was to take a closer look at American politics as the 2020 elections approached. What I was anticipating was more of the polarization and acrimony we’ve witnessed for more than a decade. I never imagined I would be witnessing the Great American Implosion.

If I’m honest, all of the people I interact with are Democrats. Their nightmare feels like it might be coming to an end. Joe Biden leads in most polls; Trump’s antics appear more and more like those of a desperate man who senses his time may be up. The Democratic National Convention, which officially made Biden the candidate for president, was premised if not on hope, then on the idea that America can recover from the devastation Trump has wrought. Call it salvageability; America can be salvaged. Not the most inspiring slogan, but at this point it’s as good as it gets.

The Republican convention, which started on Aug. 24, on the other hand, was four days of near-comical fear-mongering premised on the idea that the devastation is yet to come if Biden wins the election.

READ: Trump may still be winning

I don’t have any friends who are Trump supporters who can help explain it to me, but from what I can glean—from the febrile speeches at their convention as well as the end-of-times musings in the Trumpist media—a Biden win would be the beginning of their nightmare.

So, we have two nightmares competing for supremacy. The Democratic version is not hard to imagine. It is the last three-odd years—babies in cages, love affairs with murderous dictators, the dismantling of the international order, fascism on American streets—dialed up to the extreme. It is very likely a full-on conservative Supreme Court for the foreseeable future (very few people expect that Ruth Bader Ginsburg can soldier on for another four years); it is more cronyism and corruption at the highest levels of government, more far-right-wing baiting, more racism and more fear. That’s if Trump wins in November.

What does the future look like if he loses? Is the Democratic nightmare really almost over? Most Americans I talk to are too afraid to admit even if they are cautiously optimistic.

They think back to 2016 and the rosy glow of confidence that was so brutally crushed when Trump won the election. They worry about how the current regime in the White House is laying the groundwork to contest the results if he loses. They envision a scenario in which Trump riles up his minions with nightmarish visions of a Marxist takeover, where gay people and feminists and Washington’s baby-eating cultists upend the natural order and impose their degenerate views on Betty Crocker and the Beavers.

We can laugh at the absurdity of it all but it is, quite literally, the argument Trump is now making in his campaign. It was what four days of the Republican National Convention were all about. It’s what we are witnessing on the streets of Kenosha, Wis., and Portland, Ore.: Trump’s paranoid gang of conspiracy theorists, armed and angry, preparing for war.

READ: The rise of the far right

That so many people, including Canadian politicians, buy into the conspiracies that feed the far-right tells us that this is no laughing matter. We have reached a point now where we have to take stock of what social media is doing to us.

The U.S. is our cautionary tale. It’s starting to feel downright apocalyptic here, and I’ve barely mentioned the pandemic, which is killing a thousand Americans a day and, according to most experts, is only going to get worse as schools reopen and winter sets in.

Its response is starting to look like the sign an anti-lockdown protester in Tennessee was photographed holding: “Sacrifice the Weak,” it read. Trump recently said more or less the same thing, arguing that only those who are healthy and die of COVID-19 should be counted as pandemic deaths. Dr. Scott Atlas, one of Trump’s top medical advisers, is now peddling the herd immunity argument, which experts believe would lead to hundreds of thousands more deaths.

But let’s take a deep breath and take stock of the positives: Canada is not America. We have the pandemic more or less under control. Our own reckoning with our colonial past is hopefully under way, but minus the guns and the leaders who try to whitewash the history of racism. We have our anxieties and fears, too, but less of the political weaponization of those emotions that we’ve seen in post-9/11 America.

Nonetheless, nothing that happens south of our border is inconsequential north of it. As November approaches, Canadians will be watching what happens in the U.S. with the kind of trepidation a neighbour might have when a biker gang moves in next door.

This column appears in print in the October 2020 issue of Maclean’s magazine with the headline, “Great American Implosion.” Subscribe to the monthly print magazine here.