Weaponizing the 'paradox of prevention'

Max Fawcett: The better we do at flattening the curve on coronavirus, the more people will question whether we ever needed to try so hard in the first place 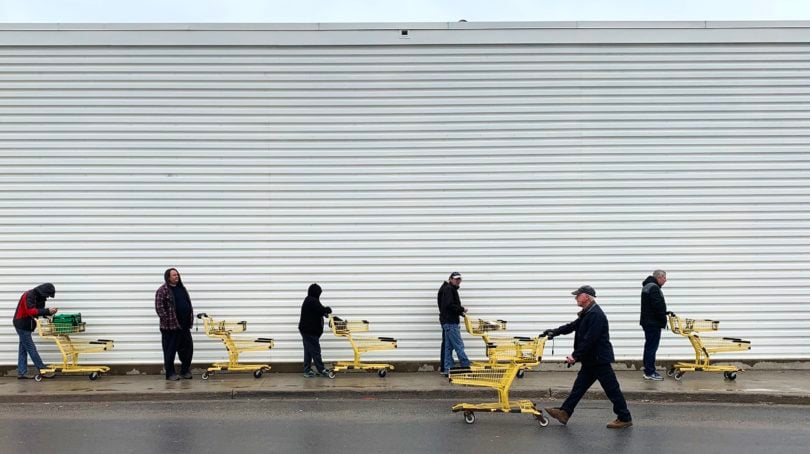 People use social distancing while they wait to get into the No Frills grocery store in Kingston, Ont. on Apr. 3, 2020. (Lars Hagberg/CP)

Amid all the bad news being generated by COVID-19, it’s only human to try and find the silver linings. And when it comes to the current crisis, there’s a school of thought that suggests the lessons we’re all learning right now about self-sacrifice, social solidarity and mutual interest can be applied to the fight against climate change.

“We are learning, overnight, that simplicity isn’t necessarily austerity, frugality need not be privation, and that we can forgo quite a lot of our leisure and consumer entitlements if it serves some higher purpose,” The Intercept’s Charles Komanoff and Christopher Ketcham wrote in a recent piece.

With trillions of dollars of stimulus already sloshing through the global financial system, and more surely on the way, there’s even a hope that we can use this moment to build both a greener economy and a low-carbon lifestyle. “If our society can act, finally, to manufacture a million ventilators and a billion protective masks,” Komanoff and Ketcham suggest, “surely we can within a few years act on a far grander scale to erect, say, 1,000,000 wind turbines, insulate and solarize 100,000,000 buildings, carve ribbons of bicycle paths throughout our cities and suburbs, and so on.”

I wish I could share that hope. But I’m afraid that the opposite may turn out to be true, and the sacrifices we’re all making to limit the spread of coronavirus will only make it harder to do what’s needed to fight climate change.

That’s because there’s a catch-22 at work here, which is that the better we do at flattening the curve on this virus, the more people will question whether we ever needed to try so hard in the first place. As Emilie Mazzacurati, the founder and CEO of a California-based climate risk data firm Four Twenty Seven told Forbes recently, “if you do things right, it means you’re never proven right because you’ve prevented bad things from happening.”

In the comparatively genteel world of public health, this is sometimes known as the “paradox of prevention.” As the U.S. Institute of Medicine’s Harvey Feinberg noted in a 2014 presentation at the Johns Hopkins Bloomberg School of Public Health, there are a number of factors that stand in the way of efforts to prevent a negative health outcome rather than responding to it.

Some, like the long delay before rewards appear, and the fact that the benefits of prevention don’t always accrue to the person who paid for it, are unavoidable realities. Others, like the acceptance of avoidable harms as normal or conflicting with commercial interests, are reflections of our less admirable traits as human beings. But together, they make it far more difficult to take preventative action than it should be.

Those factors were on full display during a recent segment of Laura Ingraham’s television show on America’s response to COVID-19. In it, the Fox News provocateur called attention to the fact that the shortages of ICU beds and ventilators that public health officials had been warning about have yet to materialize. But rather than attributing that to the belated social distancing efforts that have been underway for weeks now, she blamed the models that informed them. “Americans should be furious about this,” she said. “This is a lot of money that we’re spending on a response that was based, again, on faulty numbers.”

The Toronto Sun’s Candice Malcolm also pulled on that thread in a recent column, arguing that “before we further destroy the economy and cause endless misery and suffering as Canadian businesses fail and families lose their homes, we should make sure the so-called experts we’re relying on have thoroughly double-checked their work.” And in an echo of her frequent criticism of anything to do with climate change and efforts to actually front it, she suggested that “the science is not yet settled on coronavirus.”

Laura Ingraham thinks "Americans should be furious" that the pandemic isn't as bad as originally projected pic.twitter.com/Nz2ZZqOjyS

Indeed, for those who have made undermining the scientific consensus around climate change their life’s work, the disparity between the forecasted impacts of COVID-19 and its reality (so far, at least) will present an irresistible opportunity to cast further doubt on the wisdom of collective action and sacrifice. It will also serve as a template for how they’ll frame the efforts to fight climate change that are already underway.

So how do we escape this paradox? When it comes to public health, Dr. Fineberg suggests using “multiple media channels to educate, reframe and elicit positive change.”

But as we’ve learned over the course of the Trump presidency, mere facts tend to get swamped by the hurricanes of bad-faith bluster that people like Ingraham and Fox News routinely whip up. Paying people to take preventative measures, and thereby effectively making prevention cheaper rather than free, is a more viable strategy, and it’s one that informs the push for carbon pricing. But as we may be about to learn with COVID-19, it’s hard to get people to respond to a threat when they can’t see its worst impacts—and when others insist on telling them they don’t even exist.