Welcome to Canada's House of Cards

Andrew MacDougall: Every time Justin Trudeau has tried to free himself with a new explanation, Jody Wilson-Raybould has been there to hem him back in 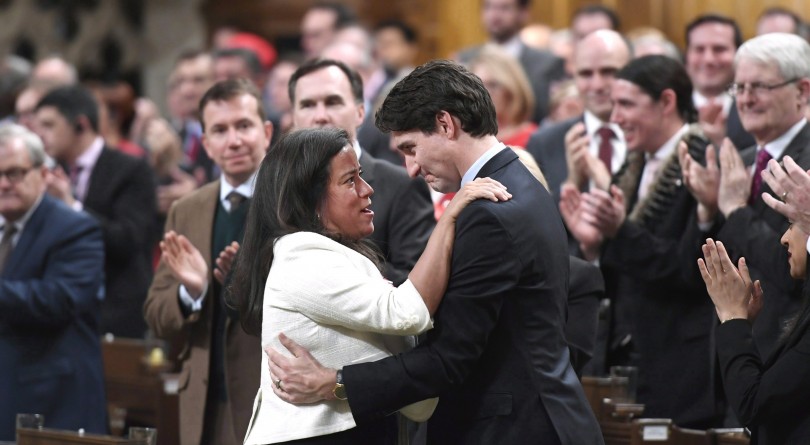 Trudeau is embraced by Wilson-Raybould after delivering a speech on the recognition and implementation of Indigenous rights on Parliament Hill in Ottawa on Wednesday, Feb. 14, 2018. (Justin Tang/CP)

Watching Justin Trudeau flail around in his bid to beat back the now weeks-long SNC-Lavalin scandal, it’s hard to see any method to his madness.

Why Trudeau goes out—day after day—to add more explanations and shading to his shifting story is a mystery. For one, it’s just not good communications practice. It also reeks of cover-up, which is probably why the polls are starting to shift.

To date, there have been several ifs, many ands, and one lost (Gerry) Butts —with no end in sight. And the next cut might just be the deepest: on Monday Jody Wilson-Raybould rolls into Justice Committee looking to “speak her truth”.

First, she seemed to have the motive.

We know a new Indigenous settlement forms the core of Wilson-Raybould’s being and the backbone of her professional life. We know she was fed up to her back teeth with Trudeau’s slow-roll approach to reconciliation with Canada’s Indigenous peoples. We know she was being vocal in her criticisms of her own government’s failings on the Indigenous front starting from late summer of last year.

How much longer was Wilson-Raybould going to wait for action? If Trudeau couldn’t do the business on Indigenous files with a majority government and the applause of the world’s press, when was he going to be able? And if Trudeau wasn’t the problem, where was the blockage?

If recent events are any indication, Gerry Butts certainly appears to have been a thorn in Wilson-Raybould’s side. And we know Butts exerted significant control over the government’s brand and agenda. You don’t get every hack in Ottawa making Prime Minister Butts jokes without it being, in part, true. If things weren’t happening in Ottawa it is entirely plausible to say that part of the problem lay with Butts, even if it was only because he was trying to do too much.

Second, she had the opportunity in the form of SNC-Lavalin.

A win-at-all-costs, big-bribing bastion of the Quebec business and political establishment? It’s hard to imagine a Laurentian-elite shibboleth Wilson-Raybould would care less about, even if her (recently adopted) Liberal Party had a long and sometimes un-distinguished record of hoovering up its money.

Indeed, in the Wilson-Raybouldian worldview, it’s companies like SNC that receive too much air time in Ottawa—often at the expense of Indigenous issues—as evidenced by SNC’s ability to lead a full-court press that eventually led to Canadian law being changed that suited its immediate anti-jail needs. Indigenous peoples only wish they had that kind of pull in Ottawa.

That SNC was able to pull this off on her watch had to stick in Wilson-Raybould’s craw. All her good intentions and stonking cabinet post didn’t matter more than a few dozen meetings with one of Quebec’s power players.

The pressure on Wilson-Raybould to change the law would have been immense.

Think of the jobs, Jody. Think of the political fallout in Quebec, Jody. Think of the beating we’d take in the Quebec press, Jody. It would be electoral suicide, Jody. We have to give them this legal remedy, Jody. We’ll just tuck it into the budget bill, Jody. So what if we promised differently, Jody. Jobs, Jody. Good, high-paying jobs in a key battleground.

But then Kathleen Roussel, the independent director of public prosecutions, threw a spanner in the works by applying the law that Trudeau passed in the dead of night correctly. There was no requirement for Roussel to consider the economic fallout of an SNC conviction, and so she told the government on Sept. 4, 2018, that the prosecution of SNC would go ahead.

Enter Trudeau, who we know met with Wilson-Raybould on Sept. 17 to reassure her—if you believe the Prime Minister, anyway—that the decision to instruct Roussel to change course vis a vis SNC would be hers alone. No dummy—and a lawyer to boot—Wilson-Raybould would have known the fact that Trudeau having any discussion with his attorney general in this way (it was a live prosecution) was a no-no. And if he tried it again she had leverage.

Butts has since admitted he met Wilson-Raybould to discuss SNC in early December at the Chateau Laurier in Ottawa. We know from “senior Government officials” in the Globe’s reporting that is was a “robust discussion” and “vigorous debate”. We don’t know yet if that debate included a threat to be moved from her portfolio if she didn’t do what, presumably, the Prime Minister wanted. We only know that Butts has since walked the plank for whatever he did or didn’t do.

Whatever was said, there was still no instruction to Roussel. Wilson-Raybould didn’t budge an inch. Until, that is, Trudeau shoved her out of the way by sending her to Veterans Affairs in his Jan. 14, 2019, cabinet shuffle.

That’s when Wilson-Raybould put down her first public marker on SNC, writing that it was “a pillar of our democracy that our system of justice be free from even the perception of political influence and uphold the highest levels of public confidence”.

Just what that meant exploded into full view on Feb. 7 via the Globe’s first bombshell story, in which it was alleged the PMO put “pressure” on Wilson-Raybould to “abandon” the SNC prosecution.

Now, guessing sources is a mug’s game but, just for our House of Cards purposes, it’s not a stretch to imagine it was Wilson-Raybould or someone close to her that fed the Globe their story. Again she had the motive (shuffle—and perhaps even a signal that SNC would finally be getting its remediation agreement) and the opportunity (she is one of very few to know all of the back-and-forth and therefore be credible to the Globe on anonymous terms).

Wilson-Raybould’s silence in the immediate aftermath of the story then fed the story. She could have put the government out of its misery with four words: there was no pressure. She still could.

But every time Trudeau has tried to free himself with a new explanation, Wilson-Raybould has made another move to hem him back in.

When Trudeau used Wilson-Raybould’s continued presence in cabinet as a proof point of their mutual understanding, she took herself out of cabinet, while lawyering up on the way. When Trudeau had his office block her appearance in public at the Justice Committee, she demanded a chance to address her former colleagues in private around the cabinet table.

After Trudeau’s office and its surrogates spent a week savaging Wilson-Raybould off the record and placing their SNC conversation ahead of Roussel’s public declaration, Butts suddenly goes walkies and the Globe magically comes up with a story proving Roussel’s decision on SNC was known to the government two weeks before that meeting. And when Trudeau finally grants her wish to address cabinet, and off the back of that discussion the MPs on the Justice Committee grant her an appearance there, a précis of the cabinet discussion—one wholly unfavourable to Trudeau—appears, you guessed it, on the Globe’s front page.

If Trudeau now doesn’t waive privilege and free Wilson-Raybould to speak, he looks guilty. If he does, why would he be feeling confident that Wilson-Raybould will exonerate him? Wilson-Raybould, or whoever is leaking to her obvious strategic advantage, is now in control.

Trudeau is now in a bind that Francis Underwood would appreciate.