What could reform look like, after the fury over the Stanley acquittal?

Opinion: The trial over Colten Boushie's death has re-exposed raw wounds. Is Indigenous self-determination over criminal justice the way forward? 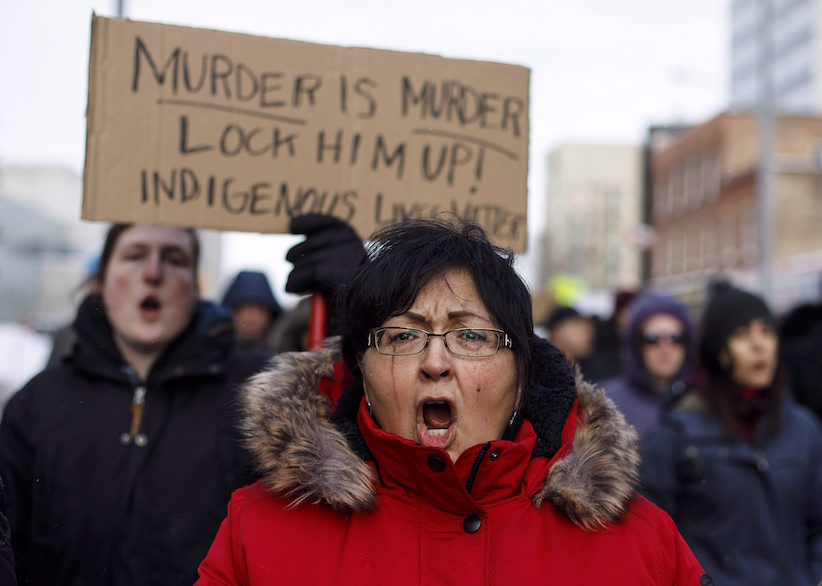 A marcher cries during a rally in response to Gerald Stanley’s acquittal in the shooting death of Colten Boushie in Edmonton, Alta., on Saturday, February 10, 2018. (Jason Franson/CP)

David Milward is an associate professor of law at the University of Manitoba. He is the author of the award-winning book, Aboriginal Justice and the Charter, as well as numerous other publications in the field of Indigenous justice, Indigenous rights and the law of evidence.

There is outrage in Indigenous communities over the recent acquittal of Saskatchewan farmer Gerald Stanley of all charges relating to the shooting death of a young Indigenous man named Colten Boushie. Though the jury heard that the fatal wound was indicative of an execution-style shot to the back of the head at very close range—and that Stanley’s gun provided no indication that a hang fire accident could have occurred as he claimed, according to a Crown expert witness—he was found innocent. Juries are frequently skeptical of claims of guns accidentally going off in murder cases; that skepticism was not to be found in this case.

Did the jury simply disregard the law and the evidence in order to give Stanley a free pass to murder an Indigenous man? It is easy for Indigenous communities to come to that conclusion, but simply no way to prove that it was the case. Jury deliberations are kept secret by law, and can never become the basis for a factual appeal. There are sound reasons for this restriction: It is meant to create a safe space for juries to conduct their deliberations free of public condemnations and pressures. However, in the absence of information, that space becomes a ripe field for speculation, and those outraged have many historical reasons to suspect the worst.

Indeed, this episode is just the latest punctuation mark in the feelings of many Indigenous people that the Canadian criminal justice system is fundamentally racist against them in multiple ways.

The lead-up to the trial itself sparked suspicions. Secret jury deliberation can lead to jury nullification, when the jury disregards the law and the evidence and renders a verdict based purely on its sympathies and prejudices. Defence lawyers will elect a trial by jury instead of by a judge alone when they are aware that their clients’ defences stand on shaky legal merit, and Scott Spencer, Stanley’s lawyer, chose to go the jury route. The defence team also deployed peremptory challenges, which can be used by both sides for purely strategic reasons with no imperative to justify their use, to nix Indigenous people from being considered as jurors. Indigenous exclusion from juries has been a longstanding issue: The Aboriginal Justice Inquiry in Manitoba in 1991 and the Iacobucci Commission in 2013 both strongly recommended a serious look at doing away with peremptory challenges. Those calls to action primarily came with reference to the Crown use of the challenges when an Indigenous person was the accused; the Stanley trial has brought the issue back into focus now, with the defence using the challenges when the Indigenous person is the victim.

There have also been numerous instances where the justice system has treated Indigenous people with inordinate harshness when they were suspects of crime. J.J. Harper was shot to death in 1988 by a Winnipeg police officer, and it became clear that the officer approached him for no other reason other than that Harper was Indigenous. Donald Marshall was wrongfully convicted for a 1971 murder when the investigating police officers, the Crown prosecutors, and even his own defence lawyers failed to act on information they knew of that spoke of a different perpetrator. Indigenous people are subject to a disproportionate police surveillance, a manifestation of racial profiling that assumes a link between ethnicity and crime. There have also been instances of “starlight tours,” a practice by which police officers abandon an Indigenous person outside city limits in freezing temperatures with inadequate clothing to protect against exposure.

But when Indigenous people are the victims of crime, it only exacerbates the impression of unfairness. The murder of Helen Betty Osborne by four young white men near The Pas in Manitoba went unsolved for at least 15 years, in part because of a defective police investigation, and in part because, despite knowing the suspects, multiple residents of The Pas did not place enough value on the life of an Indigenous woman to report what they knew to the police. Amnesty International’s Stolen Sisters report examined numerous cases of missing and murdered Indigenous women, and it condemned police officers in many of those cases for not taking allegations of missing Indigenous women seriously, and for conducting investigations with a lack of diligence in comparison to cases involving non-Indigenous victims. John Martin Crawford was a serial killer who preyed on Indigenous women exclusively because he estimated that police racism would improve his chances of going undetected. And there can be problems even when matters come to trial: Pamela George was murdered by two white men, and the judge instructed the all-white jury that they could consider the fact that George was working as a prostitute when deciding whether George had consented to sexual activity with the two accused. A not-guilty verdict followed.

Such a history has certainly given rise to a perception that when it is an Indigenous person who is a crime victim, the justice system will not take it as seriously as in cases of non-Indigenous victims. All that has led up to the Stanley trial now becoming an intense lightning rod for the feelings of resentment by Indigenous peoples towards the justice system.

Now to be fair, there are people in the justice system who are sincere in trying to do right by Indigenous peoples. The Osborne murder was not solved until an RCMP officer, Robert Urbanoski, performed a dedicated review of the case 12 years after the fact. Raymond Cormier is now on trial for the murder of Tina Fontaine precisely because the Winnipeg Police Service conducted a diligent and thorough investigation after she was found dead. I certainly do not mean to paint everyone with a negative brush.

But for many Indigenous peoples, these good stories will seem too happenstance and infrequent to allay their beliefs that the justice system remains fundamentally racist. If the routine operation of the system as it is now is inadequate, the natural question is: do we need concrete legal reforms to address the concerns? For example, do we need to abolish peremptory challenges? The question of making juries representative of various segments of the community is a complicated one. Such a reform may inject a measure of fairness into the process, but many people would not want to serve on juries as it is, since it takes them away from their usual employment and can amount to a real hardship. Many Indigenous people live in rural settings, where having to travel to urban centres for jury service can become an especially pronounced hardship. Without addressing those issues first, it’s unclear if it’s workable.

READ MORE: Why Gladue has not lived up to its promise for Indigenous justice

Do we need to lift the veil of secrecy on jury deliberations, recognizing that jury nullification can amount to a grave injustice? Does exposing jury deliberations to appellate review avoid unjust verdicts based on sympathy or prejudice, or does removing that safe space of secrecy instead compromise the integrity of jury deliberations by forcing jurors to worry about popular condemnation? These are complex questions for which there are no easy answers—but they need to be explored.

But let us take it further. Why limit ourselves to reforming the Canadian justice system itself? Could Indigenous peoples having their own criminal justice systems be the answer? Is that the only hope for any kind of fair treatment for Indigenous peoples, whether as accused or as victims? There may be some benefits to be realized, although they are not a given. Perhaps self-determination means that the question of an Indigenous person’s guilt or innocence will be determined by that person’s Indigenous peers from the same community in which he or she resides. Perhaps Indigenous processes can be utilized in ways that mainstream Canadians may be unfamiliar with. Perhaps witness testimony could be structured in less adversarial ways that are more conducive to ascertaining the truth when they emphasize establishing a rapport with the Indigenous witness, making that witness feel as comfortable as possible, and not exposing the witness to confrontational procedures like cross-examination that can put the witness ill at ease.

Indigenous self-determination over criminal justice remains a hope, but we are far from that point. Unless we get there, the Canadian justice system will continue to insist on asserting its laws and operations over Indigenous peoples. And yet there remains a fundamental problem with that ongoing insistence. Will the Canadian justice system continue to exercise a hyper-vigilant harshness in its treatment of Indigenous people when they are suspects of crime, and at the same time display apathy and laxity toward Indigenous people when they are victims of crime?