Opinion: As Doug Ford becomes the Ontario PCs' leader, a spate of American populism imported into the province in the 1890s offers lessons for the present 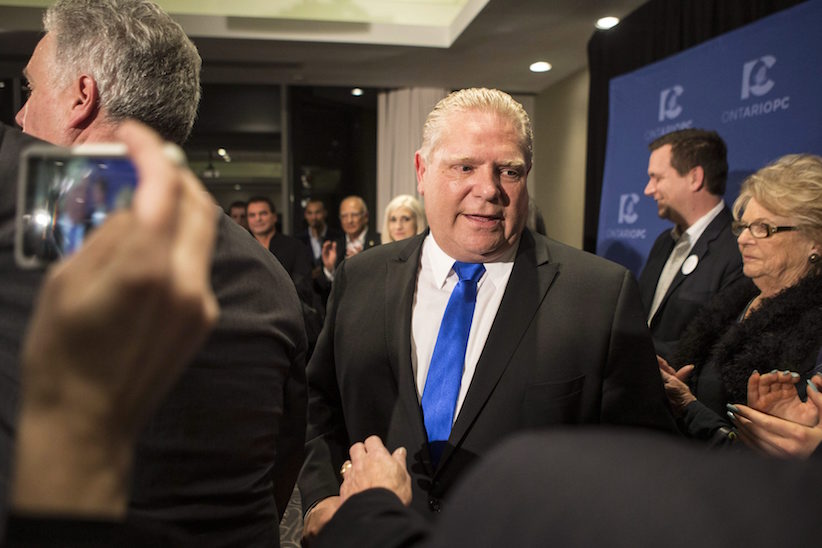 Doug Ford leaves a press conference after being named as the newly elected leader of the Ontario Progressive Conservatives at the delayed Ontario PC Leadership announcement in Markham, Ont., on Saturday, March 10, 2018. (Chris Young/CP)

“Today isn’t only about defeating Kathleen Wynne,” said Doug Ford, Jr. after winning his race to become the leader of the Ontario Progressive Conservative Party. “It’s about rebuilding Ontario to be the economic powerhouse of the country. A single task: To make Ontario the greatest place in the world.”

Although Ford has scoffed at the idea he’s following in Donald Trump’s footsteps and campaigning to #MakeOntarioGreatAgain, his rhetoric makes it clear that he’s trading in similar ideas. The country/province has lost its way, he says, thanks to elites who have squandered the promise of this great region, which has only hurt the little guy. To restore the land to its rightful greatness, he says, we’ve got to get back to our core, fundamental values, represented by the forgotten, usually rural … well, folks.

Thanks to years of accusations that Premier Kathleen Wynne has single-handedly ruined Ontario, some of which have been viciously misogynist and homophobic (See the Facebook and Twitter presences of “Kathleen Wynne for Prison”), the ground is fertile for this political narrative to play out in Ford’s favour. Many expect “Ford Nation,” the family’s base, to support his bid enthusiastically, which could present a serious challenge to Liberal incumbents in the key electoral battleground of Toronto. Pundits and media outlets are already predicting Ontario will be next in line to feel the full force of the wave of right-wing populism that has disrupted conventional politics in Europe, the United Kingdom and, of course, the United States.

READ MORE: For the Ontario PCs, it’s another fine mess

But since both Ford and Trump only won their contests on technicalities, not majorities, and are historically unpopular—a recent Forum Poll suggests nearly half of Ontarians disapprove of Ford—it seems like a good time to ask: What does populism really mean?

The term emerged from an 1890s political movement in the U.S. that saw the “People’s Party” rise to prominence. The anti-bank, anti-railroad, anti-trust and anti-gold standard movement was left-leaning, but in ways that championed traditional values and the supremacy of the heartland’s yeoman farmer. It also channeled the fervour of the Social Gospel, a homespun and informal branch of Protestantism that urged people to live their religion through charitable acts and, of course, by getting out there to spread the (Social) Gospel. Support for the Populists skyrocketed after the Panic of 1893, a crisis largely prompted by shady railroad financing that led to shuttered banks, bankrupt businesses and plummeting commodity prices—particularly wheat.

Farmers in the South and Midwest really couldn’t afford to take the hit, since many had already been languishing for a couple of decades by that point. Although the 1873 Depression had ended long ago for many in the United States, full recovery had evaded many rural areas. In these regions, many farmers blamed the businesses they transacted with—finance, transportation and food processing—for their enduring, systemic problems, which is how the Populist Party came to win the Kansas state legislature in 1890. It may have seemed like a backwoods movement to the rest of the country when it first started, but after the Panic—when hundreds of banks folded under the pressure of clients withdrawing all their money—it was clear this nascent third party had legs.

By that time, populism was also making inroads into Canada. A Michigan agrarian movement called the “Patrons of Industry” made its way to Sarnia in 1891, and within two years, according to Darren Ferry, author of the 2008 book Uniting in Measures of Common Good, the organization had 2,000 active associations and 100,000 members in Ontario. It also spread to other provinces, west to Manitoba, Saskatchewan and Alberta and, in the east, to Quebec and Prince Edward Island, where the Patrons movement was supported by its own newspaper and 80 lodges.

These numbers, particularly the Ontario ones, seem astounding. Rolls were presumably helped by the support of George Wrigley, a Social Gospel journalist from southwestern Ontario who founded a newspaper called the Canadian Farmer’s Sun that promoted the Patrons’ agenda. It’s hard to nail down the entire platform perfectly, since it was often in flux and unwieldy, but it included smaller government, women’s rights, an end to railroad subsidies, alliances with labourers and, as Ferry uncovered, a profound hostility towards lawyers, doctors, merchants, liquor dealers, manufacturers and politicians. Ferry discovered that not only were these people barred from membership in the Patrons of Industry, but even their family members were unwelcome.

READ MORE: Is Ford the populist hero Canadians are looking for?

Having a newspaper devoted to its causes helped boost membership rolls, but the Patrons’ success was also owing to the zeitgeist of the era. Living through endless boom-and-bust wheat cycles was part of the story, but so was the overall experience of living through the massive changes of the rapidly modernizing and increasingly urban and industrial North American landscape. Add to that a feeling that the Christian religion was under siege—thanks to Charles Darwin’s radical new theory of evolution—and a whole lot of late 19th-century folks were starting to feel as if their foundations were eroding beneath them and their core values were under attack.

Although the “tillers and toilers” alliance positioned itself as an anti-politics group, it still did rather well in Ontario politics. In the 1894 provincial election, 16 out of 94 seats were won by farmers running on the Patrons platform—some officially under another party’s umbrella, some independently.

Populism all fell apart soon after that, across Canada, as well as in the United States. In Canada, the Patrons were divided as to whether or not to join the more mainstream Liberal party, a question that tore it apart. And in the United States, a similar problem arose with the Democratic Party, which wanted no competition for votes. When the Democrats chose William Jennings Bryan as their leader to run in the U.S. presidential election of 1896, that siphoned away much of the support for populism, since Bryan, the “Great Commoner,” was an ardent opponent of the Gold Standard, a key electoral issue; as Bryan said in his most famous speech at the time: “You shall not crucify mankind upon a cross of gold.” Bryan lost, gold won. Undeterred, he ran for president two more times, unsuccessfully. You may remember him better, though, from the film Inherit The Wind—Bryan’s last major political act was to prosecute a teacher in Dayton, Tenn., in 1925, for trying to teach the theory of evolution. He won. But in the court of public opinion, he lost. And he died five days later, after a big meal.

Those first populists disappeared. But the animus against the city dwellers, professional classes and people who believed in the science of evolution hung around. So did their pervasive idea that the world was better in some imagined golden age of the past, back when the foundations were still solid and people still went to Sunday church. Another idea hung on, too: that only the common folks truly represented the core values of the great nation. That’s key. In fact, University of Georgia political scientist Cas Mudde refers to contemporary populism as a “thin ideology” that offers up a single thing—a tension between the good common people versus the corrupt elites.

The original populism wasn’t quite that thin. It set up two polarized camps, sure, but it also embraced women’s equality and social justice. It tried to unite the “tillers” with the “toilers” to address the unfair economic advantages that the robber barons had with their monopolies and trusts and unfair legislation. Trimming all that extra fat, and just keeping the polarization, seems like a real lost opportunity, given that many today are concerned about corporate malfeasance, predatory lenders, rising inequality, the wage gap and sexual harassment. A fat platform addressing all those issues right now might just be really popular.

But populism isn’t about popularity. Quite the opposite, argues Mudde: it’s all about the single task of dividing the people into the good commoners and the villainous elites.

One single task. And given the news that half of Ontario disapproves of Ford, it looks like half his work is already done for him.