What if Ontario scrapped cap-and-trade for a carbon tax?

Opinion: Why a rising carbon tax that follows the federal benchmark rules and is fully revenue-neutral may be the best option for Ontario—and Canada 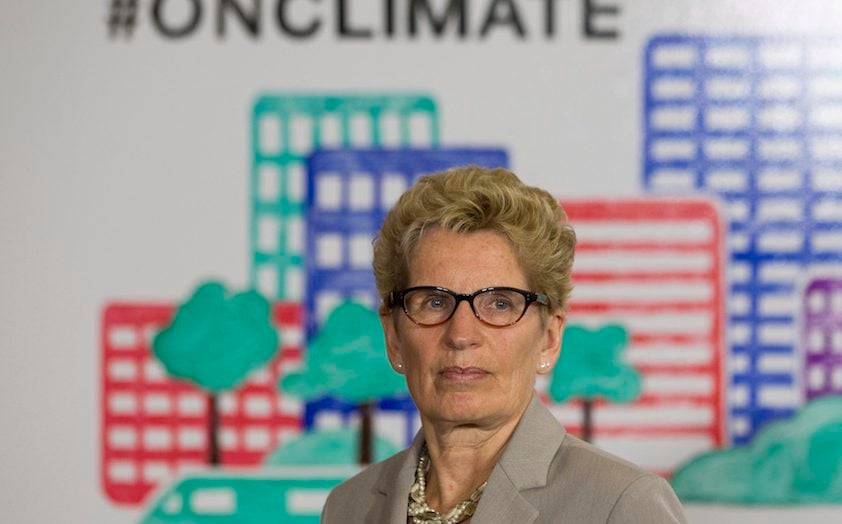 Ontario Premier Kathleen Wynne listens to questions from the media during an announcement which outlined a cap and trade deal with Quebec aimed at curbing green house emissions, in Toronto on Monday, April 13 2015. (Chris Young/CP)

Starting in 2018, every Canadian province will be required to implement carbon pricing—either with a carbon tax or a cap-and-trade system—or face the federal government imposing a “backstop” carbon tax following federal benchmark rules. While every province except Saskatchewan has indicated that they will bring in carbon pricing, there are still big differences in how provincial carbon pricing will work. While British Columbia and Alberta have instituted carbon taxes, Ontario and Quebec opted for cap-and-trade systems, linking them to California’s Western Climate Initiative.

Ontario’s PC Leader, Patrick Brown, has said that he wants to keep carbon pricing, but has criticized Ontario’s system in part because of this outflow of dollars to California. He has indicated that he prefers a revenue-neutral carbon tax. In the Ontario PC Party’s recently completed policy process, 87.5 per cent of party members voted to “dismantle cap and trade, withdraw from the Western Climate Initiative (WCI), and to return 100 per cent of revenues from Trudeau’s federal carbon pricing benchmark to taxpayers.”

With an election coming in 2018, it’s worth looking at what would happen if, instead of its current cap-and-trade system with Quebec and California, Ontario brought in a carbon tax based on the federal benchmark instead.

The difference between Ontario and Quebec’s systems makes it difficult to compare the results expected from carbon pricing across the country. For example, while Ontario and Quebec have committed to higher emissions reductions targets than other provinces, most of those reduced emissions will come from buying credits from California, not actual emissions reductions within Ontario and Quebec. But the federal rules apply a tax similar to British Columbia’s—a straight cost per tonne of carbon dioxide emitted from fossil fuels. They also include output-based allocations—essentially a rebate based on low-emissions performance—to large industries to protect their international competitiveness. (Like British Columbia, Ontario may also want to exempt marked fuel for farm vehicles from the tax as well.) Canadians for Clean Prosperity commissioned EnviroEconomics, the same firm that calculated the projected price and emissions reductions from Ontario’s cap-and-trade system, to compare the results under the two systems. (While the data cited below are from EnviroEconomics, the policy recommendations are solely the responsibility of Canadians for Clean Prosperity.)

In short, the findings revealed that implementing a straight carbon tax in Ontario, following the federal benchmark, would result in both a higher carbon price and more carbon revenues than under cap and trade—but it would also achieve significantly more emissions reductions.

If Ontario implemented the federal rules, the carbon tax would start at $10 in 2018 and increase to $50 by 2022. After taking account of the output-based allocations for large emitters, this would generate $5.1 billion per year in revenue by 2022. This is a significant amount of money to take out of the Ontario economy, primarily in the form of higher prices for gasoline and natural gas. But the government could easily prevent consumers from being hit by these price increases by refunding all carbon tax revenues as tax cuts or rebates. That $5.1 billion in revenues could be refunded to households by sending every individual in Ontario a rebate of $400 to $500 per year, or it could allow the government to cut provincial income taxes by 10 to 15 per cent or cut the Harmonized Sales Tax rate by 1 or 1.5 per cent—or some combination of these measures.

Ontario would cut its emissions far more under the federal benchmark tax than under cap-and-trade. It is estimated that the current cap-and-trade system would reduce Ontario’s domestic emissions by about 5 megatonnes per year by 2022. A straight carbon tax at $50 per tonne would reduce emissions by over 11 megatonnes. Over the five-year period, a carbon tax would achieve 29 megatonnes more in Ontario emissions reductions than the current cap and trade system. The Wynne government would argue that their current climate plan will achieve additional reductions in Ontario through the sale of offsets or through government programs that will reduce emissions. But when it comes to Ontario emissions reductions achieved by the carbon price itself, there is no question that a straight carbon tax rising to $50 will have more impact.

A carbon tax that rose to $50 per tonne would mean a bit more at the pump—about 10 cents per litre—or on your home heating bill. But the Ontario government could entirely offset that price increase by sending the money back to households as tax reductions or rebates. And the result would be nearly double the reductions in Ontario’s emissions than we could expect under cap-and-trade.

Ontario’s next election could then feature two very different approaches to carbon pricing—a cap-and-trade system that is more complex and depends on purchasing credits from California to reduce emissions, or a straight carbon tax, 100-per-cent refunded to consumers and businesses, that will reduce more emissions at home. In our view, a rising carbon tax that follows the federal benchmark rules and is fully revenue-neutral is the best option for Ontario, and Canada, to get on track to meet our emissions goals.