What is Canada's infrastructure bank for? 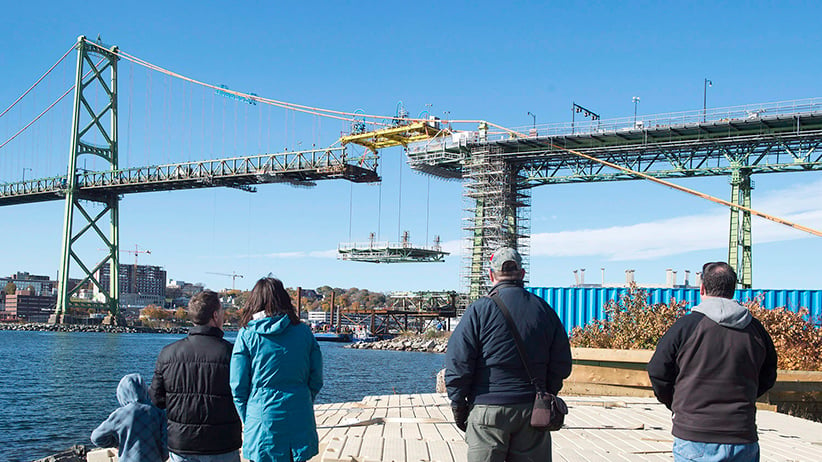 Spectators watch as workers place a new section of the deck for the Angus L. Macdonald Bridge spanning the harbour in Halifax on Saturday, October 31, 2015. The project is called The Big Lift and involves replacement of the suspended spans of the structure. Commuters have faced nightly and weekend closures and delays travelling between Halifax and Dartmouth. (Andrew Vaughan/CP)

So it’s fair for us to ask: “what for?” Let us go through the possible reasons until we find the real one.

The most obvious reason is to fund infrastructure. But there is nothing preventing private sector banks, capital markets, pension funds, and private equity enterprises from investing in infrastructure. In fact, they already bankroll trillions of dollars of construction projects—to the tune of $2 trillion worldwide, according to estimates in the government’s Fall Economic Update. With so much private money, the last thing we should need is a government bank to provide more. So that can’t be the reason.

But just as with the privatizations of the 407 toll highway in Toronto and the Canadian National Railway, there was no need for a government bank to attract private infrastructure dollars.

So what is the bank for?

The answer appears to have been given by the Canadian Electricity Association, in its submission to the House of Commons transport committee on how the bank should work: “Also important is the inclusion of de-risking mechanisms such as loan guarantees….” Bingo. In one sentence, the power companies explained the real purpose of this bank: taxpayer-funded guarantees that protect investors from losses. Indeed, the government bill that creates the infrastructure bank uses the term “loan guarantee” 14 times. So the power companies are onto something.

Their submission uses the term “de-risking,” “de-risk,” or “reduce risk” about five times. The prefix “de-” implies the bank can delete risk, like a magician making a grenade disappear before it can detonate in his lap. In reality, a government “loan guarantee” merely moves the grenade to Mr. Taxpayer’s lap.

Years ago, institutional investors could get taxpayer-funded returns from sleepy government bonds. But interest rates have been so low for so long that the only way to make real money is to invest in riskier ventures, like building power plants. A JP Morgan Asset Management report indicated that merchant power generation offers potential returns of 14 to 20 per cent, but its risk level is “high.” Cost overruns, revenue shortfalls, construction delays, or labour disputes could cause major losses—unless a new government bank offers loan guarantees to protect against loss.

Currently, governments force builders to cover cost-overruns through fixed-price contracts and to buy bankruptcy insurance to keep the project on budget if the contractor goes under.

Not with the infrastructure bank. Testifying before the Commons’ transport committee, the top public servant responsible for the bank described it as a tool for “underwriting sophisticated, highly complex projects.” The word “underwriting” comes from the 17th century London insurers who would literally write their names under a list of cargo on board a shipping vessel. If the ship sank, so did the underwriter’s money. Taxpayers could sink billions of dollars by underwriting infrastructure projects.

It is easy to imagine why the investor would want such a deal. But why would a government, elected by taxpayers, agree? At closed-door meetings in Davos, New York, and Toronto and in direct talks with officials, the most powerful financial interests on earth have given their two cents to the government on how the bank should work. It is the golden rule: those with the gold make the rules. Their rules are simple: they get the rewards and taxpayers get the risk. Now that we know what (and who) the bank is for, those who will pay the price must fight to stop it.

Pierre Poilievre is the Conservative MP for Carleton.