What is Justin Trudeau's 'mood' on SNC-Lavalin now?

Andrew MacDougall: The government hasn't ruled on the DPA question, and the company has stopped asking. It could all change in November. 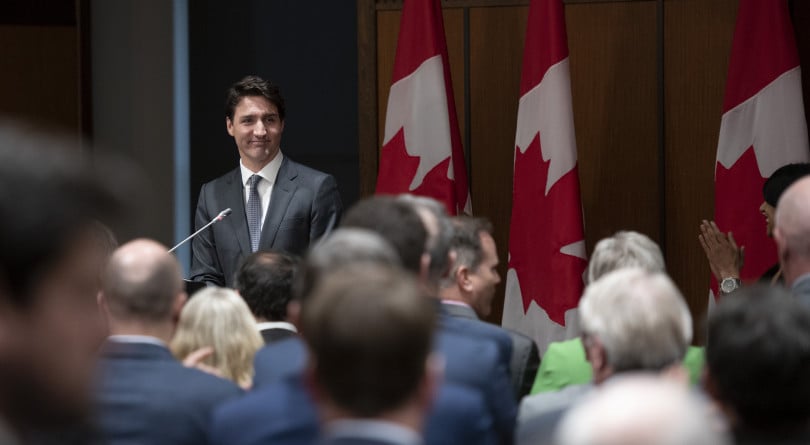 Trudeau speaks at a caucus meeting on Parliament Hill on April 2, 2019 (THE CANADIAN PRESS/Justin Tang)

The week before last Christmas, then-clerk of the Privy Council Michael Wernick issued a stark warning to then-minister of justice and attorney general Jody Wilson-Raybould on the subject of SNC-Lavalin:

“So [the Prime Minister] wants to be able to say that he has tried everything he can within a legitimate toolbox to try to head [SNC leaving Canada] off. So he is quite determined, quite firm but he wants to know why the [deferred prosecution agreement] route which Parliament provided for isn’t being used. And I think he is gonna find a way to get it done one way or another. So, he is in that kinda mood and I wanted you to be aware of that,” Wernick cautioned.

Wilson-Raybould, as we all know, disagreed with Wernick and the Prime Minister. Vociferously. She would not be offering the “DPA route” to SNC based on the advice of the independent director of public prosecutions. And no amount of cajoling by Trudeau’s senior staff—including Wernick—would change her mind.

Two weeks later, the recalcitrant Wilson-Raybould was out as attorney general.

But six months on, the “DPA route” that Parliament (read: the Liberal government) “provided for” is still closed to the Montreal-based engineering firm. This despite the Prime Minister’s “mood” and weeks and months of the Trudeau government saying it would act to protect SNC’s high-paying jobs. Why has the government not rendered its verdict?

Has the pressure suddenly eased on SNC? Was the pressure never really there? Or is it just too politically unpalatable to pick the SNC scab at this particular point in time?

READ MORE: The one and only person to blame for the SNC-Lavalin scandal

Given a federal judge has just said SNC must stand trial for corruption, and that a conviction would limit the company’s ability to pick up valuable contracts with the Canadian government—contracts the company says it needs—all signs point to timing being the problem.

And while there is still a chance the Trudeau government might not grant the DPA, it stands to reason it would have ruled it out earlier in the year if that was the case, whether at the time of Wilson-Raybould and Jane Philpott’s expulsion from caucus, or following last month’s ruling by the federal judge. After all, why leave a toxic loose end dangling?

But it hasn’t yet drawn the line. A DPA for SNC remains on the table. So, if not grant the DPA now, when?

The government isn’t showing any of its cards. A spokesman for the justice minister would say only that “nothing has changed” re: SNC, before referring to Justice Minister David Lametti’s say-nothing statement following last month’s federal ruling. Legally, Lametti can offer a DPA until there is a verdict in the case.

It could be the government is waiting for the summer recess of the House of Commons so as to avoid the grilling from the opposition on a get-out-of-jail-for-a-fee card for SNC. Without the daily storm in the House the opposition would face a much bigger challenge keeping the story alive over the summer.

Alternatively, the government might actually be following some sort of rules-based process or assessment of the SNC situation, albeit one it hasn’t deigned to share with Canadians. Trudeau and his office were big—for a time, anyway—on seeking the counsel of someone like former Supreme Court Justice Beverley McLachlin on the matter. That said, surely six months is plenty of time for the new attorney general to have formed his opinion completely and utterly free and independent from the rest of government (cough)?

One thing is clear: SNC doesn’t appear to be pressing its case anymore. The past few years might have featured dozens upon dozens of interactions between SNC and the government but, according to the lobbying registry, there have been zero contacts between SNC and the government on “Justice and Law Enforcement” since January of this year, i.e. before the SNC hit the fan on the front page of the Globe and Mail.

If the threat to SNC’s business from the federal prosecution is existential—and the full court press the company applied last fall, including a call from a former clerk of the Privy Council to the then-current one, certainly suggests it was—then surely it would still be wanting a signal from government over what is to come? Could the silence mean the government and the company have come to an understanding?

When asked whether political staff from the Prime Minster’s Office or the Department of Justice had reached out to SNC—a contact that would not be reportable under law—the answer from both offices was a firm “no.” When asked whether their offices had been in contact with any of SNC’s lobbyists the offices’ answers diverged, with the PMO saying they had not been, and Lametti’s office admitting to initiating contact with lobbyist Bill Pristanski on March 20, although they say it was to discuss single-sport betting in the NHL (which Pristanski confirms).

A scan of the lobbying registry on the morning of June 6, however, showed Pristanski no longer had an active registration for the NHL (the status changed to active after Maclean’s contacted Pristanski for comment). On March 20, Pristanski did, however, have an active registration for SNC-Lavalin, with a DPA listed as one of the files to be discussed with the federal government. Pristanski says he’s had no conversations with the government regarding SNC Lavalin in 2019.

Whatever the case, the Prime Minister owes Canadians an explanation on the way forward for SNC before his rendezvous with the polls. The SNC scandal has cost him his top adviser, his clerk of the Privy Council, two cabinet ministers, one MP, and 10-to-12 points in the polls. If the concern is still around jobs then the government should have the courage to act now and let Canadians pass judgment on the entire SNC saga.

“We’re always going to try and fight for Canadian jobs in ways that uphold the rules,” is all Trudeau had to say following the most recent court ruling. A DPA is well within those rules, now that the Trudeau government has re-written them.

The relative silence from all sides suggests the company knows not to ask until November of this year, when the court process will still be ongoing. One suspects that if Trudeau is returned that DPA is as good as gold.