What Jason Kenney's 'mission accomplished' moment has reaped for Alberta

Case counts have soared, surgeries are getting postponed and the COVID-19 death toll is mounting. Why did the premier ignore the majority of his province's voters? 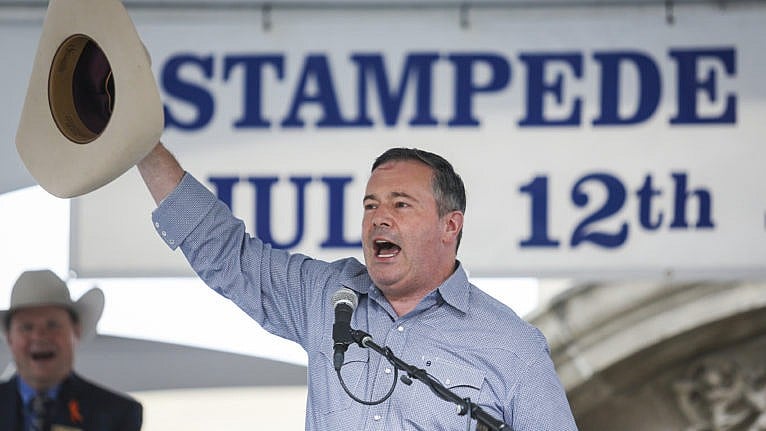 It’s not only the near-total abandonment of public health precautions that has embittered much of Alberta toward its premier, though the outcome of Jason Kenney’s decision led to an unfettered fourth wave, and unleashed the Delta variant with the effect of record-busting pressure on ICUs and the postponement of hundreds of surgeries.

The thing that more profoundly enrages folks in Edmonton, Calgary and elsewhere in the province is the brazen certainty with which he unilaterally lowered Alberta’s defences against COVID. He declared a newly liberated public would enjoy the “best summer ever”—his party sold ballcaps with that slogan—and was fond of adding that Alberta was not just open for summer, but “open for good.” A senior aide boasted to doubters on Twitter: “The pandemic is ending. Accept it.”

It’s as though Kenney felt he had outwitted the coronavirus, conquering it in a way no other political mind was able or willing to do.

Worse than ringing hollow to a provincial hospital network teetering on the brink of disaster, Kenney’s slogans will live on as reminders of his folly, and his astonishingly hubristic miscalculation. He’s like former U.S. president George W. Bush, posing in 2003 on that aircraft carrier with a “Mission Accomplished” banner behind him, three weeks after troops seized Baghdad from Saddam Hussein. The American casualty toll in the Iraq war grew more than fortyfold after that flourish of bravado.

We can hope this pandemic won’t worsen quite on that scale, but Alberta hospitals have nearly eight times more intensive-care patients with COVID than a couple months ago, more than 10 times the number hospitalized and more than 32 times the number of active COVID cases. At least in Bush’s case, the decision to stand before a “Mission Accomplished” banner wasn’t a direct contributing factor to the human suffering that followed.

We know that the current rate of transmission in Alberta—unparalleled-in-Canada—was largely preventable, and we know that other premiers have figured it out: they stuck with consistent rules on masking and social distancing, while maintaining reasonable restrictions to avoid putting large groups of people at risk. To combat this fourth wave, they are introducing limits on where the unvaccinated can go, and under what circumstances. We also know that Kenney himself got these principles in the first wave, when Alberta fared about as well as any province outside the Atlantic or northern bubbles. Then, in the second wave, he mulishly resisted reimposing public-health measures until the system approached a breaking point. Only then did Kenney relent. Having failed to learn the lesson, he repeated this exact pattern in the third wave: relax rules; watch problem build; stubbornly defend freedom; let anxiety and sickness build; then, finally, treat COVID as serious policymakers do. Given the rapid upturn in  Alberta’s curve, you might see the current wave as yet another instance of Kenney ignoring the past lesson. In fact, it’s worse than that.

This time—his third successive failure on the same file—he’s dug in deeper. He dropped more rules and declared with even greater certainty that normal is back, brandishing the fallacious idea that Alberta, like Britain, would see a “de-coupling” of case rates and hospitalizations: with widespread vaccination, this theory went, severe cases of COVID would vanish even if infections continued. Then he watched a crisis among the unvaccinated, as in the United States.

By fostering the idea that the pandemic had ended, Kenney’s team disincentivized more people to get vaccinated, especially after Kenney’s “open for good” target of 70 per cent of eligible Albertans with one dose. Now, one-dose coverage in the province remains below 80 per cent of those eligible, among the worst in Canada. (Saskatchewan ranks with Alberta at the bottom on vaccinations and restrictions, tops on hospitalizations and infections, as Premier Scott Moe detrimentally apes Kenney’s COVID approach.) Alberta’s premier has stoutly opposed vaccine passports, both on libertarian principle and his apparently false assumption they contravene privacy laws. His alternative offer of $100 for vaccine refuseniks has done little to move the needle, except when it comes to the frustration of vaccinated Albertans. Yet again, he’s seemed content to be the nation’s holdout on a policy most other premiers have long come around to, and this time he’s been holding out longer. In August, his government even flirted with abandoning isolation rules and routine testing, before walking back from that cliff as infections proliferated.

The streak of inaction has recently been more glaring due to his long absences from the public stage, even as the province’s medical establishment repeatedly mashes the panic button. One can excuse the man for staying on a two-week European vacation in late August, after a gruelling first half of 2021. But it became a problem as Alberta tipped into another public health crisis, and nobody in his government dared say much about it until the emperor had returned from abroad.

He has laid conspicuously low ever since, putting the Alberta government into an apparent caretaker mode lest Justin Trudeau weaponize Kenney’s unpopularity against Erin O’Toole and the Conservatives in the federal election campaign. You could forgive Albertans for thinking that Kenney, the former federal cabinet minister, feels greater obligation to the Conservative Party of Canada than to his own citizenry.

But more likely, it is Kenney’s own political hide that he’d like to protect. Members of his United Conservative Party caucus, especially those in rural Alberta, were openly critical of him for reimposing COVID restrictions on businesses, and his crew readily embraced his summer free-for-all plan. His party base, or at least the vocal parts of it,  much prefers the Kenney who refuses to provide COVID safeguards to the one who ultimately relents. It’s likely they, too, have dug in further to keep Kenney’s libertarian id ruling the day.

It’s also true that polling has shown that Albertans are more likely than Canadians elsewhere to strongly oppose vaccine passports. But that view represents only 20 per cent of the province’s population, Léger reported recently. More than three quarters say they support proof of vaccination. The problem for Kenney? That smaller grouping comprises much of his UCP base. While pandering to this minority is a dangerous idea for his long-term overall popularity—to say nothing of people’s literal health—siding with the majority could prompt attempts to overthrow his leadership.

As he has pushed against the popular will, Kenney has expressed empathy for cafe owners who chafe at restrictions; for the libertarian-minded who jealously guard their freedoms to not wear masks; for those whose nerves have been frayed by the social isolation. But he has expressed next to no understanding of the plight of the many Albertans who are sincerely anxious about the prevailing risk of contracting the virus, or of unwittingly transmitting it to their loved ones. Through most of the pandemic, he has said little to those who have been sickened, or have watched people they know fall terribly ill or die from this communicable disease. (Though my family has been masked and cautious throughout this pandemic, there’s only so much one can do when coronavirus runs rampant in your city. In the third and fourth waves, I’ve had immediate relatives in Calgary test positive for COVID—a child in one case, vaccinated adults in the other. Thankfully, none has fallen severely ill. But trust me: it’s a terrible ride all the same.)

And what has happened since mid-July, after Kenney proudly declared triumph over the coronavirus in time to rub elbows and swap aerosols with folks at Calgary Stampede? Nearly 40,000 Albertans have tested positive for the disease we were told was effectively behind us—more than in any other province. More hospitalizations, too. More new COVID fatalities than in Quebec, a province twice as populous.

Add to this the anguish from so many ailing Albertans whose surgeries are being postponed so hospitals have room to treat the unvaccinated sick. This is the misery that Kenney’s policies—or lack thereof—have yielded. This is what he has accomplished.

UPDATE, 7 p.m. MT, Sept. 15, 2021: A half-day after this column was posted, Jason Kenney continued the pattern familiar from the second and third waves: finally conceding the emergency he had spent weeks disregarding, and imposing the restrictions on businesses and social gatherings that he had previously sneered at. Hampered by the minority of Albertans that form his base, he imposed a complicated and half-baked form of a vaccine passport system, calling it a “restrictions exemption program.” With ICU beds rapidly running out, Alberta Health Services has asked other provinces to offer up front-line staff or intensive-care spaces, and will prepare to activate triage protocols to determine who gets immediate life-saving care and who doesn’t. And, in a new development, Kenney offered some form of apology for his excessive optimism that his province had beaten the virus. “It is now clear that we were wrong, and for that I apologize,” he said. But he still insisted he’s handled this pandemic quite well,  and clarified he would not apologize for abandoning the public-health restrictions that would have helped keep this disaster at bay.
— Jason Markusoff