What 'liberty' really means to gun-wielding lockdown protestors in America 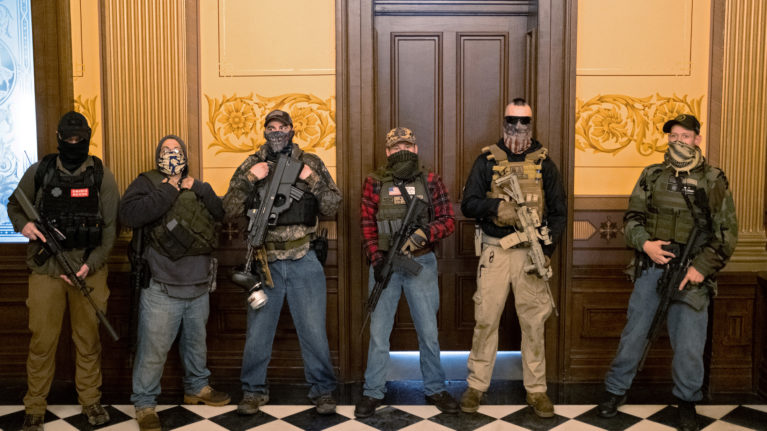 Their demand: that they, too, be able to do what they want, no matter what others want. What they want is, they claim, “liberty.”

Their demand was in response to Trump’s. “LIBERATE MINNESOTA,” Trump tweeted last month. “LIBERATE MICHIGAN.” “LIBERATE VIRGINIA.” All have Democratic governors; all have stay-at-home orders. But liberty for everyone? About the female governor, some in the crowd chanted, “LOCK HER UP!”

READ: As coronavirus spreads, Americans need a leader who soothes and unites. Instead, they have Trump.

Their allyship is natural. The gunmen, the white supremacists, the misogynists, the pandemic deniers—each believes that power over others is their birthright, and freedom the ability to wield it unchecked. It is a tyrannical freedom they believe in, a freedom to terrorize others, a freedom not for everyone but for oneself alone if one is the right kind of self—which is to say, a freedom that is no freedom at all, merely a brutal hierarchy in which both the oppressor and the oppressed are trapped, in which domination is justified by domination and subjugation is not an evil but the toxic patrimony of descendents of power.

That isn’t to say there’s no freedom for which to fight.

On a summer day in 1964, Fannie Lou Hamer from the Deep South, who was Black, who was a woman, who had polio, who as a 12-year-old had picked 200 lb. of cotton a day even though she wanted to go to school, who had been sterilized by what she called a Mississippi appendectomy even though she wanted to have children, who had an adopted child that died after the child was refused admission to a hospital because its mother was a Black half-literate sterile cotton-picking cripple woman who was getting a reputation for wanting to vote, who was fired from her job by her plantation boss because she wanted to vote, who narrowly missed being hit by 16 bullets fired by Klansmen because she wanted to vote, who was jailed and groped and half-blinded by police officers and highway patrolmen who told her they were going to make her want to be dead because what she really wanted was nothing less than for her people to vote—on that day, she walked up to a table at the Credentials Committee during the Democratic National Convention, sat in a chair and, armed only with her neat little white handbag, told much of this to a television audience.

Then the president of a storied democracy took over the airwaves so that she wouldn’t take from him what he wanted, which was for white delegates from her state to vote, but some years later, not so many years ago after all, she had this to say: “Nobody’s free until everybody’s free.”

Whatever these men want, it isn’t liberty.

This article appears in print in the June 2020 issue of Maclean’s magazine with the headline, “Liberty in America.” Subscribe to the monthly print magazine here.