What the debate around Indigenous genocide says about Canada

Opinion: The MMIWG report finding questions the very foundations of Canadian sovereignty in a way that Canadians have been unwilling to do 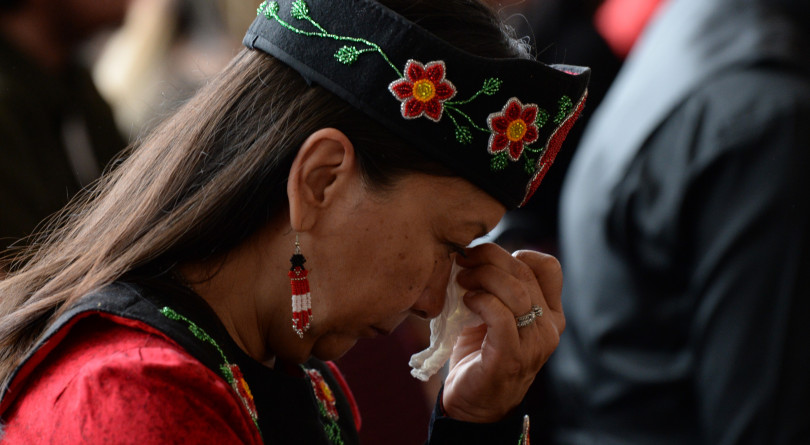 A woman listens to speakers during ceremonies marking the release of the MMIWG final report in Gatineau on June 3, 2019. (THE CANADIAN PRESS/Adrian Wyld)

All political communities hold within them dark histories of violent oppression against marginalized groups. These stories are not about moral mistakes. Instead, they remind us—uncomfortably—that the authority to govern is often built, literally, on the demonization and destruction of group-based identity.

In Canada, the government has systematically targeted the distinctiveness of Indigenous nations in order to consolidate another, hegemonic Western and white-coded Canadian national identity. As the deputy minister of Indian Affairs told Parliament in 1920, the federal government intended to continue the residential school policy “until there is not a single Indian in Canada that has not been absorbed into the body politic.”

This week, the National Inquiry into Murdered and Missing Indigenous Women and Girls (MMIWG), commissioned by the Liberal government in response to the 2015 Truth and Reconciliation Commission’s Calls to Action, released its final report. While the National Inquiry is not a judicial body, it concluded that there are “serious reasons to believe that Canada’s past and current policies, omissions, and actions towards First Nations Peoples, Inuit and Métis amount to genocide, in breach of Canada’s international obligations, triggering its responsibility under international law.”

Genocide was first codified in the 1948 Genocide Convention, an international treaty to which Canada is a party, and that today has the status of customary international law binding on all states.

READ MORE: The MMIWG final report lands: ‘I hold up a mirror to Canada’

Like all crimes, genocide has two components: the act requirement and the intent element. The acts done in the commission of genocide must be accompanied by the special “intent to destroy, in whole or in part, a national, ethnical, racial or religious group, as such.”

Genocide can be committed by killing members of such a group, deliberately inflicting on the group conditions of life calculated to bring about its physical destruction in whole or in part, imposing measures intended to prevent births within the group, or forcibly transferring children of the group to another group.

The Convention definition has also been incorporated into Canadian domestic criminal law, with one important alteration: both positive acts and failures to act can constitute genocide. While genocide will often involve killings on a large scale, in fact it is not necessary for any killings to take place, and there is certainly no numerical requirement for deaths or reduction in overall group population numbers.

The MMIWG report argues that taken as a whole, Canada’s laws, policies, actions and inactions with respects to Indigenous peoples demonstrate a “steady intention” to destroy those peoples “physically, biologically, and as social units.”

While accepting the National Inquiry’s genocide finding, Prime Minister Justin Trudeau has also lamented the public consternation that has been generated by the use of this heavily loaded word. The intense and emotional reaction to the finding has been mostly divided into two camps: those who are relieved to see the public directly confronted with an argument that Indigenous activists and scholars have been making for years, and those who argue that using genocide to describe Canada’s relationship with its Indigenous populations dilutes the significance and effectiveness of the term.

Importantly, both camps share a commitment to calling the “crime of crimes” by its name. But this debate over terminology should be understood as not so much about whether the colonial structures and policies of Canada technically fit the legal definition of genocide, as the report states—reasonable legal minds could disagree on this question—but about what it means, politically, to invoke this language.

But as Mitch Miyagawa has noted, apologia promote a national moral progress narrative and “whitewash the ways in which Canadians still benefit from [their colonial] past.”

In a sense, the genocide finding does constitute a statement of collective blame. But it is also much more than that. At root, genocide is a political crime. States engage in the destruction of groups, in whole or in part, when they succumb to the idea that national strength depends on the construction and maintenance of a homogenous national identity; in other words, when they privilege assimilation over tolerance not only of different languages, races and religions, but also, and most importantly, different ways of relating to political authority.

It is difficult to think of a political and legal strategy that could put truth to the lie of the picture of Canadian liberal tolerance more directly than a finding of genocide. Thinking about Canada’s past and present through the lens of Indigenous genocide questions the foundations of Canadian sovereignty in a way that, until now, the Canadian people and its government have been unwilling to do.

Moving forward, there are many options available to the government, including generating a thorough conversation about reparations similar to the one currently taking place in the United States. The report itself is careful not to take the possibility of individual criminal liability off the table. That we find ourselves in a federal election year enhances the urgency of a national discussion about what it will take to restructure and restore Canada’s authority to govern all its peoples.