What the deficit-loving Trudeau Liberals could learn from General Motors

Peter Shawn Taylor: When the economy is good, it's time to plan for the future. That's what GM is doing, while the Trudeau government keeps spending. 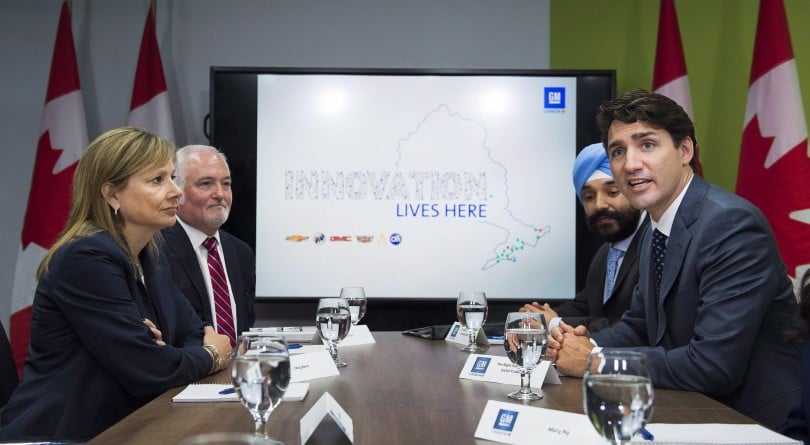 Prime Minister Justin Trudeau speaks with Mary Barra, CEO of General Motors, during a meeting at the GM office in Markham, Ont., on Thursday, June 22, 2017. (THE CANADIAN PRESS/Nathan Denette)

Canadians are in the midst of a natural experiment on this exact question.

Two weeks ago the federal government released its 2018 Fall Economic Statement. It opens with a tidal wave of good news. “Canada’s economy is strong and growing,” the document crows, noting our country was tops in the G-7 last year. It gets better: unemployment is at a 40 year low, wage growth is modest but positive, business profits are up, consumer confidence healthy.

It’s the stuff of finance ministers’ dreams. Robust growth. Rising employment. Inflation that’s tame but still conducive to congenial industrial relations. By any measure, this is an economy with no need for the heavy-hand of government intervention. Rather it’s a time when prudent finance ministers should be socking something away for a rainy day.

But while the economic news is coming up roses, an entirely different smell is emanating from the Liberal’s deficit projections. Recall that when the Trudeau government took office in 2015 its election platform promised a brief burst of intense infrastructure spending to jump start the economy: “We will run modest short-term deficits of less than $10 billion in each of the next two fiscal years … [after which] the deficit will decline and our investment plan will return Canada to a balanced budget in 2019.”

Rather than zeros, however, next year’s ‘balanced budget’ is set to ring in at -$19.6 billion. The year after will see another $18.1 billion in red ink. The current Liberal plan offers no reasonable hope for balanced budgets anywhere in Canada’s near future.

With the economy in the midst of a nearly decade-long expansion, there’s every reason to assume things will get worse rather than better on the fiscal front, especially factoring in Trump, trade and tariffs. Nonetheless, the Liberals appear unable to rein in their spending habit. Besides, who wants to get austere this close to a federal election?

Compare and contrast with General Motors.

The car maker’s immediate prospects are similarly positive. What’s good for the economy is good for General Motors, after all. Overall vehicle sales remain healthy in North America with sales of 17 million units in the U.S. and two million in Canada predicted for 2018—only slightly off 2016’s record figures. GM’s most recent quarterly report was also quite favourable, with operating profits up 25 per cent.

Despite a balance sheet full of good news, however, this week GM CEO Mary Barra essentially blew up her current business model with large-scale head office restructuring, the cancellation of several well-known product lines and significant plant closures, including GM’s Oshawa facility which employs 2,500 workers. All this in an attempt to retool the company into something ready to take on the challenges posed by the rise of autonomous driving and electric vehicles, as well as consumers’ declining interest in cars over trucks and SUVs.

“This is what we’re doing to transform the company,” Barra told reporters on Monday. “The industry is changing very rapidly. We think it is appropriate to get in front of it while the business and the economy are strong.”

Corporations are often criticized these days for excessive ‘short-termism’—the argument being that they’ve become so fixated on daily stock prices and hitting quarterly earnings targets that they’re incapable of contemplating issues or strategies with payoffs that might lie many years down the road. Governments, on the other hand, are supposedly well-suited to long-termism and seeing the bigger picture.

Yet here is Barra making large, painful and unpopular changes to prepare her firm for an uncertain future. And at a time when things still look rather good for her business and the economy at large. For her foresight, Barra has been assailed by all comers: politicians, union officials, workers, experts. Many of her critics in Canada claim it is hypocritical for GM to have taken a $10.8 billion federal and provincial government bailout in 2009 and then, almost 10 years later, turn around and shutter the Oshawa plant the bailout was meant to save. But remember that in 2009 GM was a hidebound and ungainly corporate beast unable to react to rapidly changing circumstances. Barra’s goal is to avoid such a thing ever happening again.

Meanwhile, the federal Liberals are so enamoured with their own current performance they’ve lost any sense of urgency about future spending. Big deficits got them where they are today and by God, big deficits will see them through to tomorrow. But running massive shortfalls while the economy is peaking means the government will find it much more difficult to take decisive action when our good times inevitably turn sour. A reckoning is on the way.

So sure, complain about GM’s lack of manners. But don’t overlook the fact that it—and not Ottawa—has learned the most important lesson of the Great Recession. The best time to make tough decisions is before things get tough all over.