What the media isn't covering during this election

Andrew MacDougall: Andrew Scheer's 'Universal Tax Cut' is his biggest policy announcement to date, and it's not all obvious that it even happened 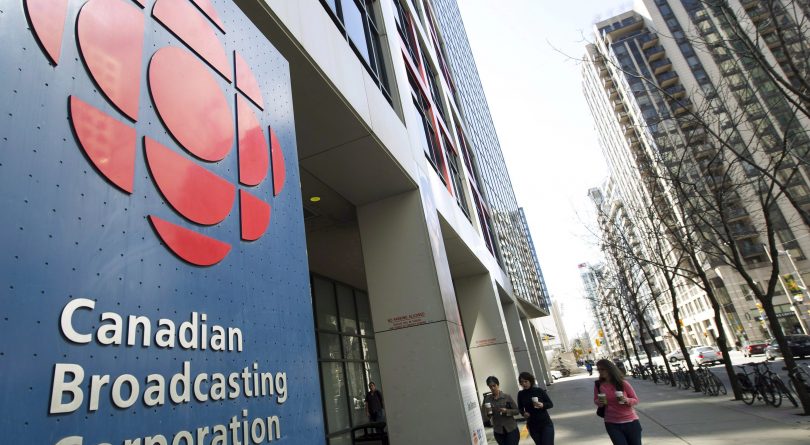 People walk into the CBC building in Toronto on April 4, 2012. (CP/Nathan Denette)

With the news industry peering into the financial abyss and the prospect of some relief very much dependent on who wins the election, it’s a tricky time to be a Canadian political journalist: How big a chunk to take out of the hand that wants to feed?

Most of us believe ourselves biters if the circumstances dictated it. But most of us are wrong. We wouldn’t. Speaking truth to power is simple to say but hard to do. Which is why I’m thankful that we live in a country with a free and independent press.

A free and independent press exists to query the policies of the powerful. They’re there to surface scandal and hold people to account. They’re there to ask the hard questions us ordinary folk can’t sneak past our politicians’ Praetorian Guard during a Reddit ‘Ask Me Anything’ or Facebook Live session.

And right now that free and independent press isn’t doing its job.

To wit, yesterday Andrew Scheer dropped the biggest policy announcement of the campaign to date—and it’s not at all obvious that it even happened.  At time of writing, there are currently 18 stories on the popular National Newswatch website that appear before the first story on Andrew Scheer’s proposed “Universal Tax Cut” announced yesterday, which proposes to cut the tax rate on taxable income under $47,630 to 13.75 per cent from 15 per cent, a savings worth hundreds of dollars to the average family. This sounds like something you—the voter—might wish to know about, right? But unless you scroll and look for the small print you’re likely to miss it.

Meanwhile, the lead item on Newswatch is a CBC story about a NDP candidate in Quebec who used to be a Green replacing an NDPer who defected to the Greens. That’s certainly news you can use if you live in Longueil-Saint-Hubert but it means sweet nothing to the other 307 constituencies in the country. Why should a national reporter—to say nothing about a national audience—care? And the second most prominent item on the site is an update to a tracking poll. In other words, they’re stories for the inside crowd.

Fine, that’s just the country’s most popular political news aggregator, targeted to the Hill crowd. How are other organizations playing the potential tax cut which impacts millions of Canadians?

MORE: Election 2019: Let the games begin—and may the odds be ever in your favour

A quick visit to the CBC website gives me a lead story about “How the parties deal with fizzles and flops on the campaign trail” followed by “5 things Jagmeet Singh wants you to know about his turban,” neither of which I can guarantee you is anyone’s ballot question sat around the supper table. If you scroll down through the mountain of stories (the CBC content machine, [to which I am an occasional contributor], is a busy beast) you’ll eventually get to the tax cut.

Meanwhile, over on the CTV app. I had to scroll past 13 stories before I got to the Conservatives’ proposed tax cut, including one about the untimely death of The Cars’ frontman Ric Ocasek. Now Ocasek’s music might have once been just what you needed, but it’s not something that will drive you from home to the polls.

Over at the Federal Election page on the Globe and Mail website, I can find headlines about Scheer going after Trudeau on NAFTA; Conservatives and Liberals being in a dead heat in the polls; and Scheer saying candidates being attacked by the Liberals have apologized for their past comments. But no headline about the Scheer tax cut, even in the subscriber section.

Of course, fruity candidate comments have been a big feature of the first week of the campaign, thanks largely to the efforts of the Liberal Party on social media. Every day the Liberals have been having their cabinet minsters tweet attention to past comments from Conservative candidates, and every day they’ve managed to get the travelling press pack to turn it into a story.

Fine. That’s politics (and fair play to the Liberal war room). But every day Andrew Scheer has responded by drawing attention to the Liberal candidate from Montreal who was turfed for anti-Semitic posts, posts the Liberal Party were also—according to the now former candidate—prepared to defend with a PR plan. My former colleague Rachel Curran has also tweeted a thread detailing other dodgy Liberal candidates. Number of questions to Justin Trudeau about them from his travelling press pack: zero.

Of course, the Conservative candidates were talking about abortion, LGBTQAs, and palling around with former Rebel Media hosts, stuff the media have—one surmises—close to a uniform view on. The Liberals’ candidates, by contrast, are peddling in anti-Semitism, professional misconduct as a lawyer, and international money laundering, issues that—while serious—are less likely to get the Twitter account buzzing.

Then again, Trudeau would have to be speaking with the press in order to ask him about his candidates. And while Andrew Scheer has been taking his bullets every day, including scrumming on the plane, something that was thought to be extinct in conservatism, Trudeau spent the weekend hiding in plain sight, refusing to scrum while insisting the press cover his down-to-earth photo ops in places like Saint-Tite, Quebec, and his glitzier stop with tennis sensation Bianca Andreescu in Mississauga.

To be fair, Team Trudeau did tell journalists the weekend was dedicated to ‘rapid movement’ and questions would thus be impossible, an excuse that would have been excoriated by a press pack in my days working for Stephen Harper, but elicited a patient and understanding thread from CBC reporter David Cochrane, a display of docility that will merit an entire chapter when “the history of the death of political journalism in Canada” is written. To his credit, Cochrane did ask Trudeau about his lack of availability when next given the chance. (It is for others to judge, however, whether that question could have better been spent querying Trudeau on his just-announced policy to intrude on provincial jurisdiction regarding child care.)

You might not have read much about it in your papers, but a big feature of the first week of the campaign was Trudeau’s lack of availability. In addition to playing keep away from the press, the Liberal leader also skipped the first leaders’ debate. In a week where Trudeau was once again under fire for the SNC-Lavalin scandal—and gave a B.S. answer with respect to who is the final arbiter of cabinet confidences—it ought to have ignited a firestorm.

To be that guy: one gets the feeling Stephen Harper would have been treated differently. Indeed, most of my memory of the first week of the 2011 campaign is of the non-stop complaints about access, even if Harper was doing press conferences (albeit limited to five questions a day) with his travelling pack.

That the Liberals’ planned expansion of their first-time homebuyers incentive in select markets, or the Scheer tax cut, or Jagmeet Singh’s plan to build a hospital in Ontario merited less attention than 2010 Facebook posts by then-teenagers is the ultimate sign of our disengaged times. For every cracking story on debt trouble in suburbia we seem to get 10 servings of tripe. It’s hard to care about politics if this is the political reporting we’re being served.

It might be that media organizations are just giving their readers what they want. But if the press is ever meant to step out of clickbait mode it ought to be during an election—even if it doesn’t pay the bills.