Matthew Sears: By being more thoughtful about acts of commemoration in pondering who is and who is not represented, we stand a better chance of righting Canada's wrongs 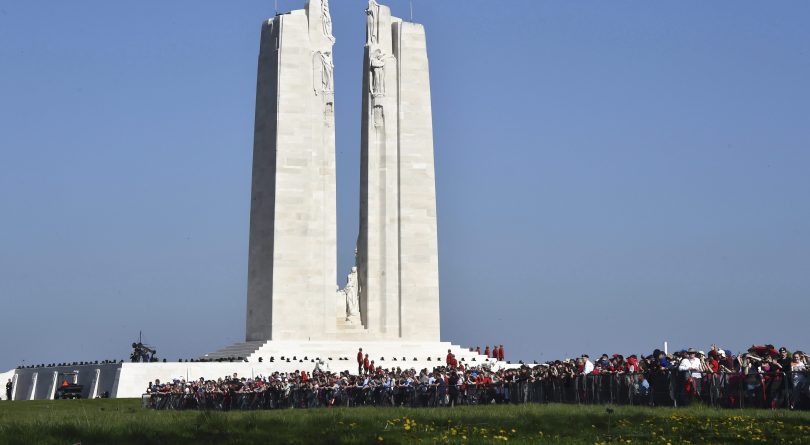 People attend attend the commemorations of the 100th anniversary of the Battle of Vimy Ridge at the WWI Canadian National Vimy Memorial in Vimy, near Arras, northern France, on Apr 9, 2017. (Philippe Huguen/Pool Photo/AP)

Matthew Sears is an associate professor of classics and ancient history at the University of New Brunswick.

Take up our quarrel with the foe:
To you from failing hands we throw
The torch; be yours to hold it high.
If ye break faith with us who die
We shall not sleep, though poppies grow
In Flanders fields.

So runs the third and final stanza of John McCrae’s In Flanders Fields. While the first two stanzas are probably better known, and encourage us to ponder the wrenching loss of soldiers in the Great War, the poem ends with an unmistakable call to arms.

For McCrae, honouring soldiers involves not only remembering them, but also emulating them. We are to emulate these fallen soldiers because, as the line goes, we enjoy the country and freedoms they safeguarded. But aside from the militarism inherent in McCrae’s lines, we should also continually evaluate who is and who is not included in our country and its freedoms. All war memorials include some while excluding others, usually in order to craft a very particular image of society and its soldiers.

I am an ancient historian, and think a great deal about Sparta, one of the most militaristic societies in history. While Sparta’s monuments are not as well known as the great temples of the Athenian Acropolis, Sparta’s own acropolis was covered in tributes to Sparta’s military victories and valiant soldiers. The most prominent monument on Sparta’s acropolis was the Stoa of the Persians, a covered portico celebrating the victory over the Persian Empire in 479 BCE. Sparta also had literary monuments to their military exploits. Where Canadians have John McCrae, the Spartans had a poet named Tyrtaeus.

MORE: Remembrance Day should be a national holiday

Like McCrae, Tyrtaeus exhorted his hearers to take up arms in the cause of their country, to be as stalwart as their forebears. Tyrtaeus went further, encouraging Spartans to fight because there is no greater glory than death in battle for one’s country, nor any greater honour than for those who survive war to live as an exemplar among the people.

Today, in the central square of modern Sparta, a modern bronze statue of a dying solider calls out to passersby with lines from Tyrtaeus: “What honour for a young man when first under fire he is killed for his fatherland, with a sword in his right hand.” This monument, along with many other modern homages to legendary ancient Spartans, evokes for today’s Spartans a sense of their glorious past, but also encourages them to fight valiantly for Sparta here and now.

If we truly want to make war less prevalent, we ought to rethink the passing of the torch exhortations found in the words of McCrae and Tyrtaeus. Beyond questioning endless calls-to-arms, we should also consider anew who is and who is not represented in literary and material monuments, and what that presence or absence tells us about how monuments are used to reflect and shape their respective societies.

Like Canada, Tyrtaeus’s Sparta was built on stolen land. Tyrtaeus is thought to have composed his poems in the 7th century BCE, during the Messenian Wars by which the Spartans annexed the fertile territory to the west and enslaved its inhabitants. The Messenians put up quite a fight, which led Tyrtaeus to recruit his fellow Spartans to join the effort. The Spartans developed into Greece’s premier fighting force largely because of the resources furnished by the subjugated Messenians and their land. Tyrtaeus’s poems promoted the very wars that crushed thousands of people and doomed them to centuries of servitude. Monuments like the Stoa of the Persians, glorifying the victory of “free” Greeks over “despotic” Persians conveniently leave out Greeks like the Messenians, and make no mention of just how despotic the Greeks could be themselves. It is doubtful that any Spartan passing by the modern Tyrtaeus monument would be inspired to reflect upon the injustice Spartan expansionism and militarism inflicted on its neighbours, let alone fight against the injustice modern imperialism perpetuates.

In Canada, on Nov. 11, thousands across the country will gather at cenotaphs and other sites of memory in order to pay their respects to those who served in our many wars. But beyond acts of memory and mourning, the noble example of soldiers past and present will be used to demonstrate what it means to be a great Canadian, a message amplified by physical monuments. In recent years, one of the most prominent of these monuments is the Canadian National War Memorial on Vimy Ridge in France. Time and again we have been reminded that at Vimy, in April 1917, Canada as a nation was born.

On one of the soaring piers of the Vimy monument there is a cross of St. George, while on the other is a fleur-de-lis, which modern observers take to represent the unity of English and French Canadians fighting alongside one another. (No matter that the monument’s creator, Walter Allward, meant the symbols to represent the friendship between Britain and France.) Yet, nowhere on the Vimy monument, nor in treatments of it in Canadian museums and classrooms, are we told that in 1917, French and English Canada very nearly erupted into civil war over the conscription issue.

Also absent from the Vimy monument and other commemorative spaces is an adequate acknowledgement of Indigenous peoples, 4,000 of whom, as pointed out by Timothy Winegard in his 2012 For King and Kanata,  enlisted to fight in the Great War in numbers equivalent to non-Indigenous Canadians, but were denied proper veterans benefits and even the franchise. While Indigenous veterans are now being explicitly acknowledged in various ceremonies across Canada—including the National Aboriginal Veterans Monument in Ottawa—we should be careful to avoid what Winegard calls the “forgotten warrior cliché.” As Noah Riseman cautions in a 2014 article, “The United States government can regularly honour Code Talkers while simultaneously remaining silent about histories of enduring hardship among veterans and other Native American communities.” I fear an analogous situation pertains in Canada. Properly acknowledging Indigenous veterans must involve more than recognizing their many acts of heroism and sacrifice, but also the dire situation Indigenous peoples faced—and often continue to face—at the hands of the Canadian state for which they fought.

We can debate the extent to which Canada’s past and present crimes should be explicitly evoked at commemorative sites, and the relative roles of monuments and museums in presenting the messy details of history. It would serve us well, however, not to let the commemoration of past wars and its soldiers obscure the past and present realities of Canada and Canada’s wars. By being more thoughtful about acts of commemoration, including by pondering who is and who is not represented, we stand a better chance of righting some wrongs and, I hope, of preventing future wars. The impressive monuments to Sparta’s past, for example, do little to improve the lives of those in the large Roma community marginalized on modern Sparta’s outskirts, just as Canada’s monuments might not do nearly enough to inspire peace and justice today.

Perhaps as a start, instead of, or at least in addition to, McCrae’s lines, Canadian children should be made familiar with Frederick Varley’s painting “For What”, Wilfred Owen’s poem “Dulce et Decorum Est”, and the stirring images of Kent Monkman at their schools, in order to reflect more fully Canada’s wars and the people that fought them.