What we can learn from a disastrous 1930 U.S. tariff on Canadian goods

As Donald Trump threatens tariffs on steel and aluminum, policymakers should look to history and take heed of the Smoot-Hawley Act's cautionary tale 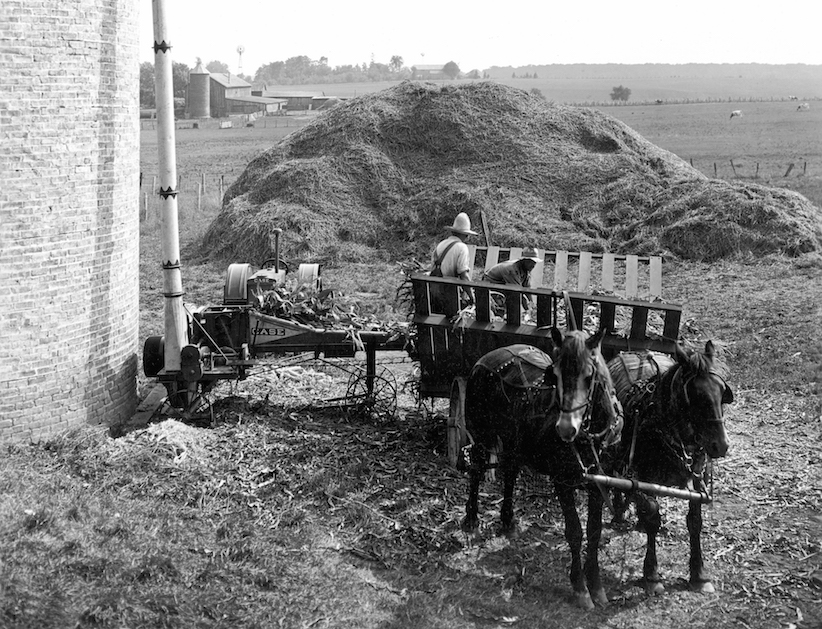 View of farmers as they fill a silo with feed, Union Grove, Wisconsin, September 19, 1930. (Photo by Underwood Archives/Getty Images)

And just like that, we’re back in the thick of it: Trump, looking to Make America Great Again, has threatened to use section 232 of the Trade Expansion Act of 1962 to impose tariffs of 25 per cent on steel imports and 10 per cent on aluminum, suggesting it’s a matter of U.S. national security. That would have a heavy impact on Canada, as it is the number-one supplier of both steel and aluminum to the United States. Of course, those proposed levies may just be more bluster for the ongoing NAFTA negotiations; indeed, Trump has said that a “new and fair” NAFTA deal would prompt the U.S. to consider an exemption.

But several things indicate things could be serious, including the Dow’s initial slump in reaction and many Republicans’ frenzied opposition to the decision. More worrying, even, is the fact that it’s entirely consistent with the rhetoric Trump campaigned on—namely, getting blue-collar workers in distressed industries back on the job with protectionist measures.

READ MORE: See if three expert mock-negotiators can come up with a new NAFTA

The 2016 campaign wasn’t the first time that an American presidential candidate has promised to revitalize rural economies with tariffs. Perhaps the best-known instance of this resulted in the infamous 1930 Smoot-Hawley Act, a disastrous policy that’s closely associated with the Great Depression—and it offers lessons as Canadian politicians prepare for a potential trade war.

It all started in 1928, with the Republican Herbert Hoover running for the nation’s highest office against Democratic candidate Al Smith, a former governor of New York who, as the first Catholic to run for president, never stood a chance with rural Protestant voters. Hoover didn’t take the heartland for granted, though, and instead tried to assuage concerns in distressed farm communities—many of which were devastated by low commodity prices and an epidemic of bank foreclosures—with the promise of new tariffs on imported agricultural products. Although we think of the 1920s as a period of wild, unprecedented prosperity, that wealth was largely concentrated in urban areas and among people participating in the new, industrial economies; the rural areas were left behind.

After an ugly campaign characterized by dirty tricks, misleading propaganda and the involvement of the anti-Catholic Ku Klux Klan, Hoover won the election handily. Weeks after his inauguration on March 4, 1929, Congress introduced legislation mandating stiff tariffs, which bounced around for a year as both houses debated whether this policy designed to protect farmers should include protections for industry as well. The final version, the Smoot-Hawley Tariff Act of 1930, placed massive duties on thousands of products from both sectors. It’s worth noting that this was not Hoover’s original intention: As Dartmouth economist Douglas A. Irwin argues in Peddling Protectionism, the scope of the bill spiralled out of control as it passed through both houses, thanks to pork-barrel politics fattened up by lobbyists representing all manner of industries demanding protection, too. 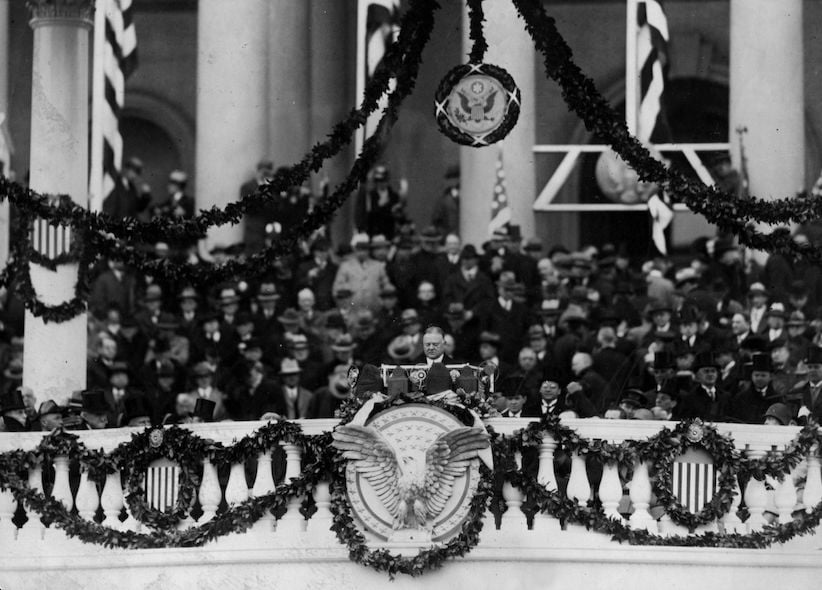 President Herbert Hoover delivers his inaugural speech to the thousands assembled before the National Capitol in Washington D.C. on Mar. 4, 1929. (Keystone/Getty Images)

Meanwhile in Canada, Liberal Prime Minister William Lyon Mackenzie King was watching the scene in Congress, but like many Canadians both then and now, he was unconvinced that an aggressive tariff would ever really come to pass. The Liberals had faced tariffs before, after all—notably on wheat, dairy and cattle—and Canada had survived. But Smoot-Hawley was much more aggressive, and even the Americans were divided. Maclean’s ran a piece in August 1929, which repeated a quote from a U.S. paper: “Isn’t there enough hatred of America in the world already without whipping it up more?”

But that’s just what the Act did. In fact, in Canada, nationalism and anti-American sentiment had been growing all throughout the 1920s, prompted by a series of relatively minor tariffs imposed on agricultural products in 1922. That decade saw the founding of new Canadian magazines, the rise of the Group of Seven on the strength of their turn to long-dismissed Canadian landscapes, and the growing sense that Canada needed to develop a national identity. In 1929, Maclean’s ran a piece called “Canada, Be Yourself!” by Arthur Hunt Chute, which invoked Canada’s allegiance to the Crown, Jack Canuck, and its moderate tariff system, compared to the United States’ high-tariff policy, calling for Canada to forge its own destiny.

This aligned, roughly, with King’s policies, who retaliated with a modest tariff on American goods. That was not enough, however, to appease the angry Canadian populace, especially once America’s Great Depression started to take Canada down with it. As economics professor Judith A. McDonald and her co-authors demonstrate in their 1997 article “Trade Wars: Canada’s Reaction to the Smoot-Hawley Tariff,” King’s handling of the new duty was a key reason Canadians started to sour on him.

That opened the door for Conservative politician R.B. Bennett to launch a dynamic 1930 election campaign that promised fiscal revenge on the Americans, economic independence and a plan to “blast” Canada’s way into other markets. Although nobody would have predicted it a year before, Bennett became prime minister and, almost immediately, escalated the trade war with stiff retaliatory tariffs. These may have made Canadians feel better, but it didn’t help the country’s export markets, which dropped to half of what they had been, pre-Smoot-Hawley.

Despite Chute’s call to establish a separate destiny for Canada, the result was really more like a mirror image of the United States: the country plunged into a depression. However, Canada did employ one different tactic by seeking to improve trade relationships with Commonwealth countries. In 1932, Ottawa hosted the Imperial Economic Conference, which saw hundreds of international delegates descend upon the nation’s capital for a six-week summit of endless dinners and a gala event at the Chateau Laurier. Although the final negotiations were far from perfect, Commonwealth trade was the only lifeline Canada had for the next decade, as it suffered through economic hardships that wouldn’t end until the start of Canada’s involvement in the Second World War in 1939. 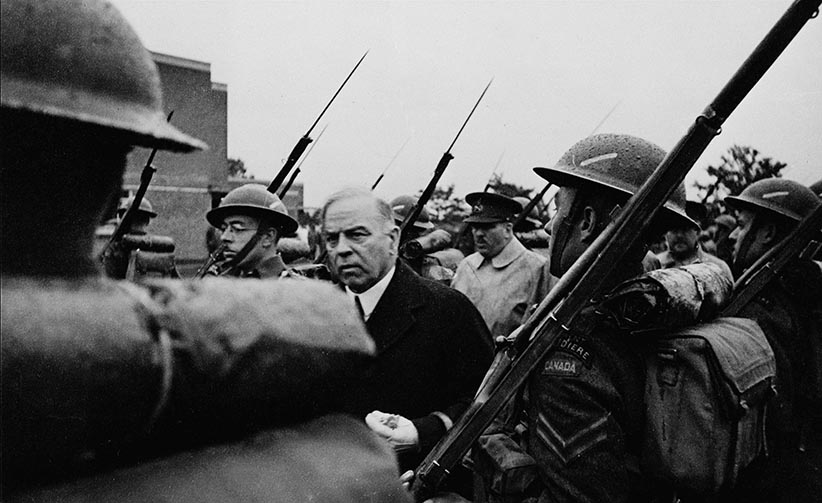 The big question about Smoot-Hawley is always this: What role did it play in the Great Depression? Opinions about this have changed over time. In 1930, a fairly large group of economists and financial types criticized the tariffs by predicting they would turn a recession into a full-blown depression. Henry Ford called it an “economic stupidity”; more than a thousand economists signed a letter opposing it, and Thomas Lamont, a J.P. Morgan partner and financial advisor to the president, blamed it for sparking nationalist sentiment all over the world. Its opponents feared that the Act would erode goodwill and provoke retaliatory tariffs, spreading protectionism around the world. That did indeed happen: Germany, for example, attempted to turn their economy into autarky, closing it off as the country strove for self-sufficiency.

But few historians today would say that the Great Depression was caused by Smoot-Hawley. Looking back, it’s easy to see that there was a cocktail of problems in the air, including the abuse of easy credit, economic disparity, rampant speculation on the stock market and tax cuts for the rich that weren’t trickling down. That said, in Canada’s reaction to Smoot-Hawley, we can see that the trade war may well have exacerbated and extended the Great Depression for everybody. McDonald, who studies cross-border trade relations in Bethlehem, Penn.—the heart of what they call “steel country”—argues that while United States’ tariffs hurt other countries, the retaliation from trading partners hurt the U.S., too.

She does, however, point out that it didn’t take long for most people to warm up to freer trade, since, objectively speaking, protectionism failed to improve economic conditions. Many, in fact, thought tariffs were making the economy worse. Franklin Delano Roosevelt’s campaign of “New Deal and Repeal” (of prohibition) promised lower tariffs in 1932, and he went on to defeat Hoover quite handily. Three years later, King easily beat Bennett in 1935, taking back Parliament for the Liberals.

Lowering tariffs, though, wasn’t a quick fix. Irwin, the Dartmouth economist, argues that Smoot-Hawley did severe damage to America’s exports—damage that lasted for decades.

History threatens to repeat itself now, with Europe threatening further levies on bourbon and blue jeans and Canada vowing to “take responsive measures to defend itself”; retaliation seems inevitable. But rising nationalism in the affected countries and the global spread of protectionism don’t necessarily have to follow. The words of Chute are still as relevant as they were nearly 90 years ago: “The mistakes of the American system, which have been made, which cannot be unmade, are a challenge to us to work out a separate destiny.”