Pam Palmater: A much larger and more powerful movement than the last, led by Black and Indigenous peoples and supported by millions of Canadians 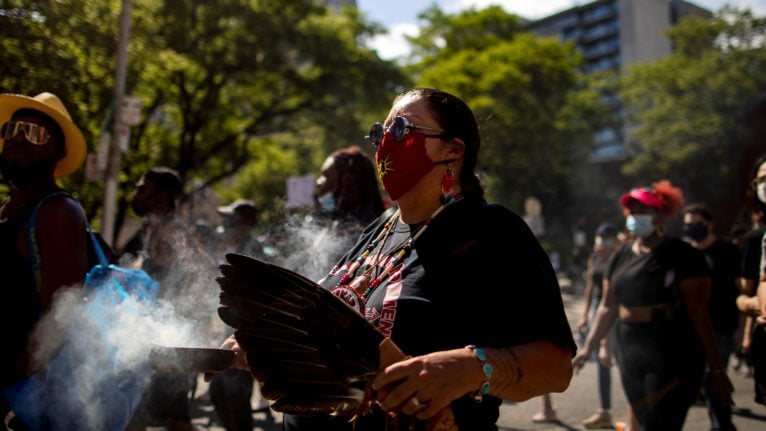 Prime Minister Justin Trudeau has prorogued Parliament in the middle of the COVID-19 pandemic, a reset that may serve to intensify simmering tensions across the country rather than quell them. While Trudeau claims he shut down Parliament to address the coronavirus, it appears more likely that he’s escaping the WE Charity controversy.

Whatever the reason, his biggest challenge may well be the movements that continue to build around social justice and climate justice. Not even a worldwide pandemic could stop Indigenous people defending their land rights or Black and Indigenous solidarity against systemic racism and violence. Canadians are rising up in solidarity. There is no going back to the status quo.

During the historic Idle No More movement of 2012-13, which saw thousands of protests, rallies, marches, teach-ins and even blockades, there were often more non-Indigenous participants present than Indigenous peoples. These protests spread into the United States and many countries around the world, highlighting the ongoing injustices in Canada. What we have seen in 2020 is the making of a much larger and more powerful movement—Idle No More 2.0—led by Black and Indigenous peoples and supported by millions of Canadians. These are grassroots community members who are rising up to fill the void left by politicians who have failed to protect us from corporate greed and destruction.

In 2015, after Idle No More actions transitioned from national teach-ins, rallies and protests to First Nations land-protection efforts, Canada had seen enough. The federal government reacted by implementing a draconian anti-terrorism bill, C-51, that focused more on monitoring people here at home than any real terrorism threat. Instead of controlling or discouraging public activism, the bill cemented it. This attack on basic rights and freedoms demonstrated that the consistent breach of Indigenous rights is a slippery slope into the erosion of all Canadians’ rights.

Idle No More helped bring together hundreds of civil society groups and community groups. In the years that have followed, these relationships have only become stronger. Now, you can feel both the tension and the hope.

It only took a few hours for Canadians to organize when they saw the armed invasion of Wet’suwet’en territory where RCMP officers removed peaceful Wet’suwet’en peoples from their lands to start construction of the Coastal GasLink pipeline. Indigenous peoples and their allies peacefully united under the banner of “Wet’suwet’en Strong”—including rail occupations at Tyendinaga, Ont., and the weeks-long Indigenous youth occupation of the B.C. legislature—that focused worldwide media attention on the human rights violations inflicted upon the Wet’suwet’en. In a rare move, the United Nations (UN) Committee on the Elimination of Racial Discrimination publicly called on Canada to withdraw the RCMP from Wet’suwet’en territory and halt the pipeline.

Additionally, the unresolved Six Nations land claim over the Haldimand Tract led to extended protests at Caledonia, Ont., in 2006. Canada’s continued failure to resolve it has led to the land occupation at what is now called “1492 Land Back Lane.” And if Trudeau thinks we are not all standing in solidarity with the land defenders at Six Nations, he has grossly underestimated the situation.

The failure to address human rights violations against Indigenous peoples in Canada is a long-standing issue. The UN has tried to draw attention to both the grave human rights violations and the rising tensions in Crown-Indigenous relations for many years, to no avail. In the past, Canada could quietly ignore these reports with little consequence.

But this past June, Trudeau discovered that there is a price to be paid for Canada’s continued human rights abuses at home and abroad. Indigenous peoples, together with hundreds of prominent individuals and civil society groups, campaigned against Canada getting a seat at the UN Security Council, citing ecological and human rights infringements from Canadian mining companies worldwide, the selling of arms to countries like Saudi Arabia, and using militarized police to force pipelines through Indigenous territories. Canadians called on member countries not to vote for Canada—and it worked.

You do not have to be a political scientist to see that if Trudeau doesn’t have a plan to centre human rights in his next Throne Speech, he’ll wish that all he had to worry about was the WE scandal. This pandemic has shown us all how important it is that we pull together—as grassroots Indigenous peoples, Black Lives Matter and non-Indigenous Canadians—and take care of one another. There is no room for social injustice in a just Canada.

Trudeau has a real opportunity to turn his government around and work with both Indigenous and non-Indigenous people toward human rights, social justice and environmental protection. His failures have allowed racism and violence to continue and we will not stand for it anymore. Trudeau can join the peoples’ movement or be run over by it. It’s his choice.

This column appears in print in the October 2020 issue of Maclean’s magazine with the headline, “Idle No More 2.0.” Subscribe to the monthly print magazine here.